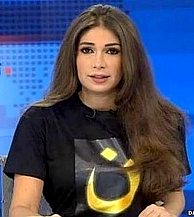 Early last month, when ISIS/ISIL — now known simply as the “Islamic State” or the “Caliphate” — overran the city of Mosul in Iraq, its troops began daubing the Arabic letter nûn, or “n”, on the houses of Christians, in preparation for killing them or driving them out of the city, after which their property would be claimed for the Islamic State.

Almost immediately, Christians and supporters of Christians in the Middle East began to display the nûn on their clothes, their houses, and in social media in solidarity with those who were being persecuted by ISIS. The following French-language news report explains how the whole process got started.

Many thanks to Oz-Rita for translating this article from Europe Israël News:

Lebanon: The courage of a star TV presenter who shows herself with the ﻥ

We are all Nazarenes! Used as a message of hatred and contempt by the Islamic fanatics of “ISIL”, the letter “nûn” (ﻥ) of the Arabic alphabet is slowly becoming a sign of recognition worldwide, a symbol of pride to be Christian and of solidarity with the Christians from Iraq.

This time the symbol of the letter nûn ﻥ invited itself, and was given prominence once more by a courageous woman journalist.

Dima Sadeq, star presenter of the news channel LBCI, appeared on the screen wearing a T-shirt with the letter nûn (ﻥ). She explained: “From Mosul to Beirut, we are all nûn ﻥ”, she declared just before presenting the evening news.

“We are all targets, pointed at with a finger or a sword because we are different, in terms of sex, religion or skin colour. We are all targets of the killers in these times of madness,” she declared in front of her viewers.

With this she is following the example of the famous journalist, Dalia al-Aqidi, an Iraqi and a muslim, on whom Aleteia reported recently.

This July 19 report from AINA describes the events that inspired Ms. Al-Aqidi, Ms. Sadeq, and others to adopt the nûn as a symbol. Since then almost all of the remaining Christians in Mosul have been driven out of the city:

ISIS has begun marking Christian homes with the Arabic letter “n” which stands for the word “Nasrani” which means Christian in Arabic. The word comes from the name “Nestorian,” historically attributed to the Holy Apostolic Catholic Assyrian Church of the East, though it is incorrect. In addition, properties marked by ISIS have also been marked as “property of the Islamic State.”

13 thoughts on “We are all Nazarenes!”