Newsletter #137 — Kurdish Cracks in the Ummah

Tennessee’s newest power-seeking identity group, the TN Kurdish Community Council held a rally in Nashville demanding that Tennessee help them get their own country. As if we really want another country based on sharia law. Among the more interesting signs at the rally, was this one: 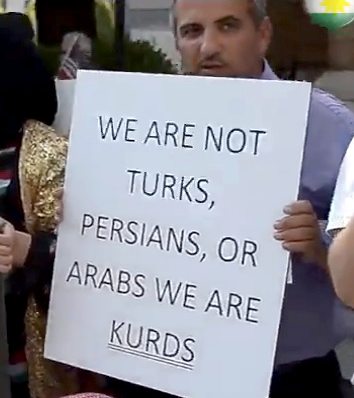 What do the Kurds have against the Turks, Persians or Arabs? And what difference does it make when Tennessee’s Kurdish activists will just call you an Islamophobe, xenophobe, bigot or racist if you try to differentiate by their ethnic identities?

Besides, the Kurdish, Arabic, Turkish and Persian Muslims tell us that their ummah is for all Muslims because they all follow the same doctrine, they all follow Islamic law and they all model their lives after their prophet Muhammad. Even the Hamas charter agrees that: “Its ultimate goal is Islam, the Prophet its model, the Qur’an its Constitution. Its special dimension extends wherever on earth there are Muslims, who adopt Islam as their way of life.”

So what difference does it make whether it’s a Kurdish Muslim or a Arab Muslim who follows Mohammed’s example of marrying a child? Or the Quran’s command to a husband to beat his wife when she disobeys him?

One of the more vocal Jew-hating Kurdish activists in Nashville is Drost Kokoye. She says “I fight inner demons everytime I see a kafiya.” The “kafiya” (also spelled keffiyeh), is traditionally associated with Arabs and Turks who wear it as a scarf around their shoulders or head. The black and white patterned kafiya is typically associated with Jew hater Yassar Arafat and the red and white kafiya was adopted by Hamas. Much like the hijab, the kafiya has become a political symbol.

Drost’s negative feelings about the kafiya though doesn’t stop her from helping to organize and promote pro-Hamas rallies.

Drost was just one of the original Kurdish board members that started the Tennessee American Muslim Advisory Council (AMAC). She continues to serve on the AMAC board. Daoud Abudiab, president of the mosque in Columbia, was also one of the original AMAC board members and served as its co-chair. He is now Board President of the TIRRC (TN Immigrant and Refugee Rights Coalition).

Daoud Abudiab is Arab Palestinian. Does he share Drost’s feelings about the kafiya? What about Hamas?

How does it make Daoud feel that Nashville’s Kurds want everyone to know that they are not Arabs? Is the Arab-Kurdish polarization in Iraq, seeping into Nashville? Kurdish animus towards Turks is legend, so there should be no reasonable expectation that the Kurdish Community Council is going to collaborate with Tennessee’s Turkish American organization.

Sunnis, Shias and Kurds can’t live peacefully together in Iraq; why should it be any different over here?

5 thoughts on “Kurdish Cracks in the Ummah”