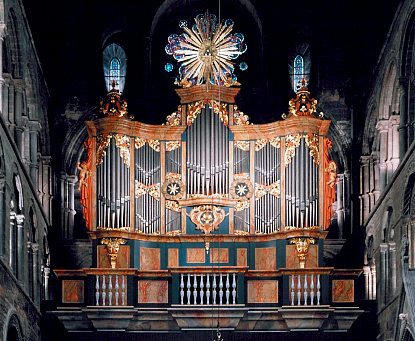 Last Christmas Dymphna gave me a boxed set of the complete organ works of Johann Sebastian Bach, as performed by the late Marie Claire-Alain. It’s the best Christmas present I’ve received since 1980, when she gave me the Oxford Dictionary of English Etymology (which I still have — the tattered, dog-eared volume, now broken into four pieces, sits on the little desk next to me here as I type this), and possibly the best ever. The set includes fourteen CDs, each containing at least an hour of music by J.S. Bach played on the pipe organ.

Can you imagine anything more sublime? I’ve been working my way slowly through the set (I’m up to #10), enjoying Ms. Alain’s interpretation of works I already know, and savoring the ones I’ve never heard before.

It was one of the latter that caught my ear last month the first time I listened to it. About two or three minutes in, I thought, Why haven’t I heard this before??

It’s a chorale prelude for “Komm, heiliger Geist”, or “Come, Holy Spirit”, BWV 652 (I know of at least one other prelude for the same chorale, BWV 651). One of the unusual things about it is that it is exceptionally long, more than ten minutes when played by Marie-Claire Alain. I found two live performances on YouTube, where you can see the hands and feet of the organist, but the following rendition is of higher quality. It also features the score of the prelude, timed to match the performance, as a special treat for people who can read music.

This incomparably beautiful piece of music is “Komm, heiliger Geist”, performed by Bine-Katrine Bryndorf on the Wagner organ (built in 1738) in the Nidaros Cathedral at Trondheim, Norway:

As I have said many times before, this is why we fight.

I chose to enter the trenches in this information war so that music such as this might not be wiped off the face of the earth.

I decided to do what I do now so that these lambent pipes might not lie dented and silent amidst the broken and charred woodwork in the rubble of the cathedral, next to the headless body of the organist.