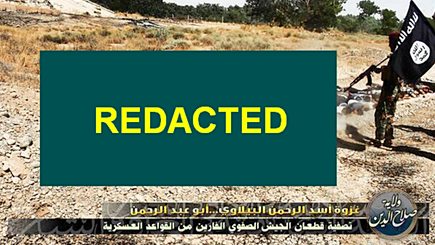 The nomenclature “Islamic State” has created a delicate international issue, one that ISIS may or may not have intended, but one that was certainly unexpected by the Western media. 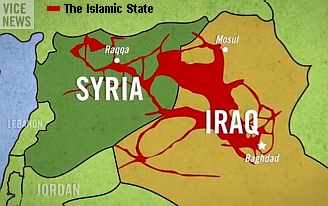 For the past twelve years — the last six years of the Bush Administration and all six of Obama — the United States has striven mightily to erase the word “Islam” from any reports and discussions about terrorism. When people are raped, tortured, shot, beheaded, or enslaved, no mention of jihad, Islam, or Muslims must be made — you don’t mess around with JIM! The text of official documents and training manuals and government publications has been scoured clean of references to Islam in any materials related to “violent extremism”.

Our NATO allies in Eurabia have followed suit. And the media on both sides of the Atlantic fell eagerly into line, declining to talk about JIM if at all possible when anything nasty occurs in the news. The word “Islam” is generally reserved for fawning stories about Ramadan and Eid, or accounts of interfaith outreach, or videos of women in hijab giving out fluffy pink bunnies (but not piglets!) to children at street festivals.

But with the proclamation of the Islamic State, JIM has made a comeback.

The problem, you see, is the acronym…

Before the beginning of July, when the media had to report on the blood-soaked streets of Raqqa or Aleppo, they could refer to those responsible as “ISIS” or “ISIL”, thereby hewing to the Pentagon/State Department guidelines on how to discuss violent extremism.

But “IS” doesn’t work so well: it looks too much like “is”. This is especially true in news headlines, which, depending on the site and/or application, may be shown in all caps for news feeds or posted articles. I saw one earlier in the week that I read several times, unable to parse the syntax until I realized the word was “IS” and not “is”.

As a result media outlets use the acronym sometimes, especially in the text of articles, but less often in their headlines. For example, this Reuters article — which refers to the deeds of “Islamist militants” in the body of the text, in its best mealy-mouthed manner — sports the following headline: “Islamic State extends gains in north Iraq, reach Kurdistan border area”.

This is not what the Nattering Nabobs of Nomenclature were hoping for.

I hardly need to tell you that virtually anything that ISIS does in front of the camera is horrific, so that every news story that includes a photo or a detailed description will associate the most grotesque and barbaric of acts with something the reporter calls the “Islamic State”. This can’t be what the Powers That Be intended — the West’s slide into full Islamization was supposed to proceed quietly, without the man in the street becoming aware of what the word “Islam” really means until it was too late to do anything about it.

The new Vice News documentary about the Islamic State (Part 1, Part 2, three more to come) is too graphic to embed here, but if you follow the links, you’ll see that it contains everything that our political masters do not want us to associate with Islam.

The 20th century had no shortage of mass carnage of the same sort that ISIS is now so heartily engaging in. But when the Communists or the Nazis shot thousands of people and threw the corpses into rivers or bulldozed them into mass graves, it was not something they trumpeted in their propaganda outlets or posted photos of on billboards. They did their gruesome deeds in remote areas, and tried to restrict awareness of them to those with a “need to know”. I’m certain that killers who loved their work were employed to perform those grisly tasks, but for their superiors it was a distasteful political expediency, and not an end in itself.

ISIS is different. They want everyone to see them gunning people down, and beheading them, and celebrating over the heaps of bodies. They put rows of heads on fence palings and videotape it themselves, so that their fans can make the ghastly footage go viral. Every blood-soaked corpse is a glorious triumph to be made part of the ubiquitous jihad propaganda that circulates all over the world. And, above all else, they are eager for the world to know that it is seeing Islam in action.

This is more than just barbaric political theatrics. It is a religious frenzy. It is an ecstasy of slaughter.

It is, in a word, a demonic sacrament.

ISIS wants the world to know that the Islamic State is expressing Islam fully and completely, just as Allah and Mohammed intended it to. They want everyone to know what jihad is all about. They want us all to see what good Muslims they are.

They don’t mind whether the word gets out on their own websites, or is excerpted on Vice News, or quoted by me, or displayed (with fastidious pixellation) in nightly news reports on Western TV. It doesn’t matter to them, just so long as the word gets out.

But that’s not what our political masters wanted. This was not supposed to happen.

We can do our part to undermine the Islamization of our countries by lavishly quoting the MSM whenever they discuss the Islamic State. And make sure you include the headline!

I can guarantee you that ISIS will provide copious material that the elites don’t want the hoi-polloi to associate with the word “Islam”.

So thank the Lord (or the Flying Spaghetti Monster, if you prefer) for providing us with the confluence of “IS” and “is”. It’s one of those little pranks he likes to play on us from time to time, just to keep us on our toes.

65 thoughts on “JIM Makes a Comeback”