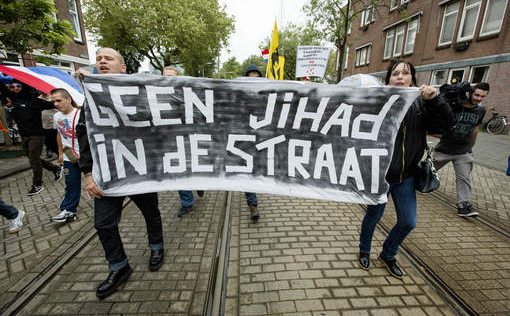 Last weekend a peaceful march against ISIS in the Schilderswijk district in The Hague turned violent when Muslim counter-demonstrators went on the rampage, with the tacit connivance of the police.

Trouble is brewing in The Hague. IS is taking over or has taken over the Schilderswijk (Painter’s Quarter, a notorious very poor area). Last week a peaceful demonstration against ISIS was stopped by Muslims, with passive assistance of the police.

The mayor Jozias van Aartsen is under fire for:

Don’t worry about him, though; he can do a lot worse and get away with it — just look at mayor Alied Wolfsen of Utrecht.

Wilders said some words about it, and things are really heating up there.

Arnoud van Doorn, the turncoat who left the PVV and is now paid by Saudi Arabia (how else can he afford to drive around in a new Jaguar?) announced he will set up a militia to protect mosques against attacks from the extreme right. 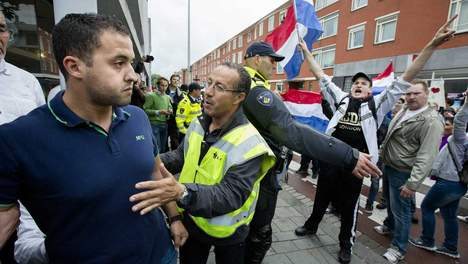 Below are excerpts from a report about Geert Wilders’ reaction to recent events in Schilderswijk:

Wilders calls for anti-Islam march in The Hague

Geert Wilders is calling on ‘everyone’ to take part in an anti-Islam demonstration in The Hague Schilderswijk district on September 20.

The anti-Islam PVV party leader made the call on Wednesday morning following reports in the Telegraaf about continuing unrest in the district.

Last weekend, a riot broke out in the district when around 150 Muslim youngsters began an illegal protest, blocking the route of a legal march against Muslim radicals and the IS (Islamic State) terror group.

It was the latest in a string of problems in the Schilderswijk which includes the harassment of psychiatric patients, fans of ISIS who dream of a caliphate in the area and anti-semitism.

On Tuesday, justice minister Ivo Opstelten said the weekend riot was ‘unacceptable’ and called on the city council to take action.

The council is now set to meet on Wednesday evening to discuss the situation and mayor Jozias van Aartsen will finally return from holiday to attend the meeting.

Van Aartsen has been criticised for his absence and for his lack of action on previous occasions.

Wilders made his call to join the demonstration on September 20 after the organisers of the weekend march applied to the city council for permission to hold a second march.

‘I think lots of people, hopefully thousands, should join the march to show that this is about Dutch territory and we will not accept a sharia district,’ he told Dutch media.

Read the rest in Dutch News.

9 thoughts on “Jihad Comes to Schilderswijk”