…it’s not as nice as the beach or the golf course.

The Islamic State has thrown Western heads of state off their game. Their political game, that is — not their other games. It’s August, after all, and those fun-in-the-sun games are proceeding very nicely at Martha’s Vineyard and Polzeath, thank you very much.

First it was Barack Obama, fist-bumping with his buddies on the links. Now it’s David Cameron, showing off his trim prime ministerial physique in the surf on a Cornish beach. Below is the cover from today’s Daily Mirror: 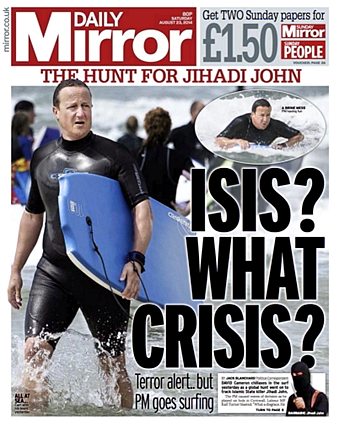 Islamic surf’s up, however, it alludes to the Sun headline of 11 Jan 1979 when Jim Callaghan denied that there was ‘mounting chaos’ during Britain’s ‘Winter of Discontent’.

In other ISIS news, JP sends more about what the meaning of “IS” is. The twelfth item down in today’s Telegraph headlines— if made all-caps with the punctuation removed — reads:

OBAMA IS CANCER THAT MUST BE EXTRACTED FROM MIDDLE EAST

That roster of headlines will eventually be revised, so here’s a screen cap:

The news item referred to is here. Strangely enough, it has a different title.

Yesterday Hagel, today Obama. The headline writers just can’t help themselves — perhaps they are doing it unconsciously on purpose?

A side note: Thirty years before he became prime minister of the UK, James Callaghan said:

Never let me hear anyone say again that a Socialist State cannot provide outlets for those with initiative. The rewards given to ability in the U.S.S.R. at all levels are far greater than those given to the employed in capitalist Britain. I have seen it and it works.