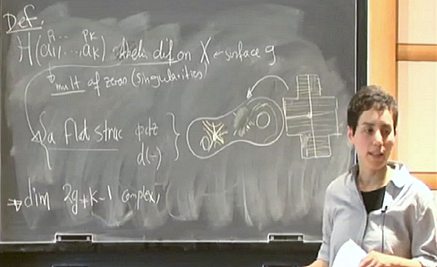 JLH has translated an article about an Iranian-born woman named Maryam Mirzakhani, who made the headlines earlier this month when she won the International Mathematical Union’s Fields Medal.

While this is not as dramatic as some reports on our life-and-death struggle with Islam, it illustrates what I think of as “the Fjordman Effect.” I think back to the time before the West European purge of dissenters began, before Breivik et al., when I enjoyed reading Fjordman’s well-researched studies of various fields of endeavor — scientific, commercial, philosophical — that detailed the inventiveness and industry of Dar al-Harb, and by contrast exposed the vaunting presumption and willful ignorance of Dar al-Islam.

The translated article from blu-News:

Every 4 years, the International Mathematical Union awards the Fields Medal, which is regarded as the Nobel Prize of mathematics. Iranian-born Maryam Mirzakhani is the first woman to receive it.

For the first time, the Fields Medal — awarded every four years since 1936 for outstanding discoveries in mathematics — is being given to a woman — Iranian Maryam Mirzakhani.

At age 17, Maryam was one of the first girls to participate in the Mathematics Olympiad, and she won a gold medal. This specialist in geometry earned her doctorate at Harvard University. She moved to Princeton University in 2004 and was offered a professorial chair at Stanford University in 2008.

In August 2014 the 37-year-old was the first woman, as well as the first person from Islamic Iran, to receive the Fields Medal, which — as the Richard Dawkins Foundation informs us — was awarded for the first time in 1936. Mirzakhani received the distinction for her “outstanding contributions to Geometry and Dynamic Riemannian Surfaces and their Modular Spaces,” in which she combined “methods of diverse fields like Algebraic Geometry, Topology and Probability Theory.”

Maryam Mirzakhani’s achievement is noteworthy because it is an absolute exception in the Islamic world. Besides the fact that as a woman and a scientist she is non-existent in the Muslim world, there is the fact that up until now there have been only two Nobel Prize winners in the “hard” sciences,” i.e., the natural sciences, from the Arabic Muslim world — Abdus Salam (Physics, 1998) and Ahmed Zewall, Chemkstry 1999).

“Nothing Intelligent since the Middle Ages”

As reported by blu-NEWS, Briton, Richard Dawkins — leading evolutionary biologist — antagonized the Islamic world a year ago by tweeting that Islam “had produced nothing intelligent” since the Middle Ages. He also noted that Muslims worldwide had won fewer Nobel Prizes than the graduates of Trinity College, Cambridge. To date, ten Nobel Prizes — 8 of them so-called “soft” Nobel Prizes, for peace and literature — had been awarded to Muslims. There was a brief time in the Middle Ages when Muslims had accomplished great things, said Dawkins, but not much since then. The reactions to this statement were predictably violent.

For Maryam Mirzakhani, who is famous in her Iranian homeland, this success was only possible in a free society.

21 thoughts on “A Singular Woman”