What is Racism?
by Fjordman

We hear a great deal about the evils of “racism” in the mass media. But what exactly is “racism,” anyway?

If the word means “to harbor prejudice against people with a different skin color and ethnic background”, then it is documented that Europeans, especially those from northwestern Europe, are among the least racist peoples on the surface of this planet. People coming from other parts of the world, for instance from Asia or Africa, tend on average to be more prejudiced against individuals from a different ethnic background. This further implies that mass immigration from Asia or Africa to the Western world increases the amount of racism in our societies, since Europeans are being displaced by more prejudiced newcomers.

If “racism” is used to indicate that you believe that some cultures are better than others, then this is simply common sense. A brutal, violent clan culture with endemic corruption generates a different society from a culture with high levels of trust and low levels of corruption, where citizens try to settle their differences in peaceful ways. Different cultures produce different societies, and some societies yield better results than others. This is an empirical fact that is easily documented. 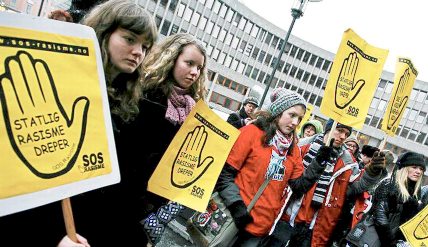 If “racism” is intended to mean a belief there could be genetic differences between different human beings which affect not just how they look, but also how they think and behave, then things become more sensitive.

However, the progress in our understanding of human genetics is now very rapid. Evidence is accumulating indicating that human evolution has continued until the present day. According to some studies, it has even accelerated into historical times. Evidence further indicates that genetics influences how people behave. For instance, studies of identical twins indicate that they often hold similar political views. The implications of these studies is that people who are genetically similar also tend to think and act in similar ways.

If we expand this same principle from individuals to ethnic groups, we might theoretically face the possibility that a group of somewhat genetically related people displays related world views and behaviors, partly for biological reasons. Another way of saying the same thing is that perhaps culture has a genetic component. Please note that I say a component, not that everything in a culture is 100% genetic. Ideas clearly matter. This is, for instance, why some white converts to Islam seem to develop a sudden urge to blow things up shortly after converting.

Nevertheless, even if it is just a component, this implies that genetics has large-scale consequences for entire societies. The immigration policies in all Western countries today are essentially based on the premise that all peoples are identical in all ways, apart from some supposedly superficial traits such as skin color. As soon as recent immigrants who come from the opposite side of the Earth learn to speak to local language, they are exactly like the natives.

If this turns out not to be true after all, what does it mean? The inevitable conclusion is that the immigration policies in all Western countries, and by extension their demographic and cultural future, is based on a lie. Maybe Bangladeshis are not identical to Englishmen, Congolese to native Frenchmen or Pygmies to Germans.

There are already indications that this could in fact be the case. The Scandinavian countries have long been ranked as having some of the highest levels of social trust and happiness worldwide. A scientific study from July 2014 indicated quite seriously that there could be a genetic basis for some of this. By extension, this would imply that one cannot replace Danes with Turks, Swedes with Somalis, Norwegians with Pakistanis or Finns with Arabs and expect the same result. If this is true, it should have practical consequences for how we deal with immigration.

To be a so-called “racist” in Western societies today is one of the worst things a person can be, especially if he happens to be born with a white skin. The mere accusation is enough to ruin careers and destroy lives. Looking back on the past three generations, one is astounded by how well the fear of this little word has become embedded in our societies. This fear required decades of extensive indoctrination.

Some people call a person a “Nazi” as soon as he mentions genetic differences. This is not rational. The Nazis did not invent genes. Evolution had been going on for billions of years before single-celled organisms evolved into Adolf Hitler. Furthermore, the basic principle of evolution is that small genetic differences can make a significant difference. Even a mutation in a single gene can have real-life effects.

There is every reason to assume that this basic biological principle also applies to humans. For instance, one might say that all human beings on this planet share the vast majority of their genes with all other human beings. Technically speaking this is perfectly true. However, that does not mean that the remaining genetic differences do not matter at all. For example, perhaps you who are reading these words share 99.9% of your genes with Isaac Newton or Albert Einstein. Unfortunately, that tenth of a percentage point made a rather big difference. That is why Newton and Einstein were among the greatest geniuses who ever lived, whereas you, unfortunately, are not.

If so, what is the scientific basis for the term racist? There is probably none. The doctrines of anti-racism that are currently being aggressively promoted in certain quarters are therefore anti-scientific.

In summary: the fact that there are genetic differences between not just individuals, but also groups of people, is uncontroversial. Simple appearances confirm this. It is more controversial to suggest that these genetic differences might also influence other traits than skin color, eyes, hair and people’s appearance. Yet evidence strongly indicates that genes may influence individual behavior, not just looks. There is no logic or scientific reason to assume that the same principle does not apply to larger groups of people. We already possess some evidence indicating that this just might be the case.

What then, is the meaning of the term racism? Based on the above mentioned information, I suggest the following definition:

A racist is a person who believes in the theory of evolution and takes it seriously.

The term “racist” carries no scientific or logical value. It seems mainly to be employed as a tool of intimidation against Europeans who resist being displaced in their own countries by people from other parts of the world. The word should therefore be removed from our active vocabulary.