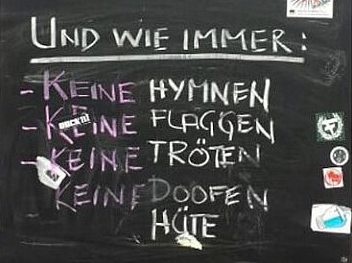 Ayatollah Khomeini famously remarked, “There is no fun in Islam.” The same might be said of German Progressives in the Kreuzberg district of Berlin, who self-righteously forbade any World Cup celebrations involving — yuck! — German national symbols.

JLH has translated an article about the phenomenon, and includes this note:

The author’s attitude toward people who play down nationalism reminds me of what is happening here in the USA, but most forcibly of Tommy Robinson, whose great crime was organizing a group defamed as “soccer hooligans” into an instrument of national pride and the drive for freedom — and had to be punished for it.

The translated article from B.Z.:

Celebrating Soccer is Forbidden in Kreuzberg

The national colors and anthems are forbidden in a bar. Typical for the leftist feeling of superiority, thinks Gunnar Schupelius.

Excuse the lack of definition — I took this photo on the way by, with my iPhone [Photo of the blackboard mentioned in the next sentence].

I was standing in front of a bar in Kreuzberg and looking at the board that normally displayed the specialties of the day. Instead of names of dishes, I read the following advice for the guests who were expected to come and watch soccer. It said: “And, as always, no anthems, no banners, no horn-tooting, no silly hats.”

I asked the waiter what that meant. Answer: “We watch soccer because we are interested in the sport and not some stupid nationalist feelings!” Aha, now I got it. I asked if the customers saw it that way too. “Naturally,” he said, “but the board is a reminder, in case anyone forgets.”

I would have loved to ask about the consequences of the instructions on the board. Am I allowed to celebrate German triumphs in this bar, or must I compensate by also cheering goals for the other team? Does the waiter keep watch, to make sure I don’t cheer too much for German goals? Will I be ejected if I forget myself before the game and hum the national anthem?

I try to imagine how the politically correct people in this bar celebrated the World Cup: objectively, judicially, quietly. And they felt good about it — on top of the world. They felt that they were something better — above all the other Berlin soccer fans. Because, right here in Kreuzberg, they had overcome nationalism.

The pride and arrogance that cry out from the soccer rules of that bar remind me of the stickers leftist activists put on the cars of soccer fans. They tear up the black-red-gold banners on the cars and replace them with: “It does no matter what motivated you to use this banner — it always produces nationalism.”

And yet, we have every reason to sing the anthem and wave the flag, even without soccer. They are the symbols of the Federal Republic of Germany, which has lived in peace with its neighbors for 65 years and guarantees its citizens the greatest freedom there has ever been on German soil.

In 1990, the “new federal lands” joined this wonderful republic. And at the very least since World Cup 2006, we Germans again have as normal a relationship with our national symbols as other peoples. That is how it should stay.

It is both moving and terrifying how the Left in Kreuzberg retains its distorted relationship to the home country even in relation to the World Cup. And writes out its orders on the blackboard.

11 thoughts on “There Is No Fun In Leftism”