Enza Ferreri of LibertyGB reports on the long-term threat posed by “British” mujahideen when they return from Syria and Iraq. 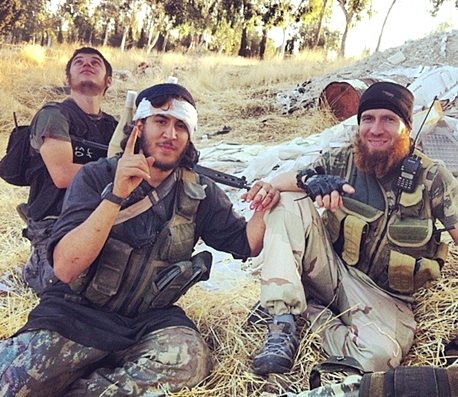 Protect Our Borders from Syria and Iraq Jihadists
by Enza Ferreri

Why should people who take a bus or Tube train in London be in fear for their lives from a bomb attack? Is it right that air passengers should be afraid of terror threats when they board a plane and also be subjected to continuous disruptions for the same reason?

Every day we hear news of more young Muslims — often born and bread in the UK but not “British” in any true sense of the word — travelling to Iraq and Syria to join groups fighting in a jihad (Islamic holy war) to establish an Islamic state over there. These Muslims also promise to come back to Britain and create a climate of terror over here.

Their threats have to be taken with the utmost seriousness: we have seen from media reports and internet videos how ruthless these fighters are with the lives of others and how determined they are to ethnically cleanse the Middle East of Christians.

Despite Prime Minister David Cameron’s empty reassurances that Britain will not ignore this security threat, former MI6 director of global counter-terrorism Richard Barrett has said the numbers are too high and the security services won’t be able to monitor all the jihadists returning to the UK. It is “out of the question”, he added.

Top counter-terrorism expert Cressida Dick, the Metropolitan Police’s assistant commissioner and head of specialist operations, has warned that Britain will live with the consequences of Syria and the rise of Islamic extremism within its own borders “for many, many years to come”.

The jihadists returning from Syria, due to its relative vicinity to Europe, are considered “the biggest threat to Britain’s security” and a “greater threat than al-Qaeda terrorists in Pakistan and Afghanistan”. The British Home Office identifies Syria as “the most significant development in global terrorism.”

Charles Farr — the Home Office’s terror chief — and others warned that the Syrian war is stoking the biggest terror threat to the West since September 11, and this problem is predicted to persist for as long as the hostilities will continue.

It is simply foolish to believe that the threat is minimal or behind us. So far we’ve just been lucky

He wrote that he had encountered a level of complacency among some elements of the public which he found “seriously disturbing”, adding:

“It is simply foolish to believe that the threat is either minimal or now behind us. We have, indeed, been fortunate but, sadly, this has not been because the terrorists have, since 2005, given up trying to do us harm. As Andrew Parker, the head of MI5, has made clear, each year there have been serious plots which if they had not been identified and disrupted would have led to the deaths and mutilation of many British citizens.

“The police and the security services have been very successful but we must not underestimate the devilish technical skill of those terrorists who design ever more sophisticated means of concealing explosives in mobile devices, in clothing and in otherwise innocent objects. They have been hard at work over the last year.”

Only last week Britain’s airports were put on a new terror alert following intelligence warnings that al Qaeda’s chief bomb maker — Ibrahim Hassan al-Asiri, who is now said to have sworn allegiance to ISIS — had linked up with jihadists in Syria to pass on his skills.

It couldn’t be clearer that these people mean business. Some “British” Syria fighters have admitted preparing to carry out terrorist acts.

Possible links have also been found between three Muslims based in Cardiff, Wales — Isis militants who were present in a propaganda video filmed by the group — and two other men from the same part of the city, who are in prison for having planned to blow up London’s Stock Exchange.

A “British” jihadist has warned of the “black flag of Islam” flying over Downing Street and Buckingham Palace.

Abu Bakr Al-Baghdadi, the “Caliph” of the Islamic State spreading between Iraq and Syria, has promised support to “oppressed” Muslims everywhere and told his soldiers: “You will conquer Rome and own the world”. Islam supporters hacked a Facebook page dedicated to Pope Francis and filled it with vulgar and offensive words and images: just a warning about things to come.

There is no doubt that militant Islam is on the rise in the world, and we’ll ignore it at our own peril.

We must protect our borders from these would-be terrorists

We must protect our own borders. It’s suicidal to allow would-be terrorists who have already shown their allegiance to violent jihad and acted on it to return to Britain, when top intelligent and security experts have made it clear that we cannot accurately monitor this threat once inside the country.

The party Liberty GB has among its party policies the only measure that would guarantee a greater safety for British people:

“Stop from returning to the UK anyone, including British citizens, who has left the country to fight alongside or support Muslim militias or jihadist groups abroad.”

15 thoughts on “Protect Our Borders from Syria and Iraq Jihadists”