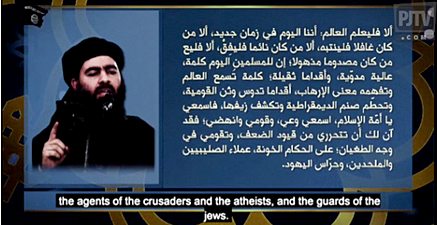 The new Caliphate, a.k.a. the Islamic State, has big plans for the future. After they finish wiping out the mushrikun and murtadeen in the Middle East and North Africa, it will be time to reclaim al-Andalus for the Ummah.

Many thanks to JLH for translating this article from Die Preußische Allgemeine Zeitung:

“Oh Muslims, hasten to gather around your caliph, so you may become again what you were for years — kings of the world and knights of war.” With these words, Abu Muhammad al-Adnani, Speaker of the Sunni-Salafist Organization “Islamic State (IS, previously ISIS), ended his 34-minute address at the beginning of Ramadan, in which he apprised the world of the foundation of a new caliphate.

On the same day, supporters of Caliph Ibrahim, alias Abu Bakr al-Baghdadi, propagated a map via Twitter, showing the caliphate, whose territory comprehends the north and east of Syria and half of Iraq, and is expected to expand in the future like the historic caliphate of the 7th century, to include the Near and Middle East, North Africa, and then Spain, Portugal, Austria, southeast Europe, the Caucasus, central Asia and the sub-Saharan regions of Africa. And there was timeline for the planned annexations, in which, for instance, the fall of Madrid is announced for the year 2020.

Proof that this kind of statement does not result from the euphoria of a number of overzealous proponents, but accurately represents the intentions of the IS leadership, is in a personal appeal by the caliph — carried, among others, by “The Telegraph” — in which there is a further, especially symbolic goal of conquest: “Hasten to your new state, Muslims…That is my advice to you. If you follow it, you will conquer Rome and become masters of the world, by Allah’s will.”

Many commentators thoughtlessly assess this as mere swagger in the style of Osama bin Laden. But the IS is not al-Qaida. In contrast to that terror network — active worldwide, but splintered — it has a solid territorial base of circa 300,000 square kilometers, with prosperous metropolises and profitable oil fields. Therefore, IS can already finance its military campaigns with no problems. Estimates of the British secret service are that it has by now accumulated $2.4 million.

Furthermore, the resurrected caliphate, which quite explicitly intends to follow the tradition of the direct descendants of Mohammed and envisages the renewal of its empire, has a clear strategic concept that is far more attractive than that of al-Qaida, and has already mobilized Muslims from 70 countries.

In the third place, although IS is assessed as at most 25,000 men at this time, it must be taken seriously as a military power. It possesses captured US helicopters and tanks, howitzers and at least one SCUD with a range of up to 700 kilometers. Available weaponry, according to the “Los Angeles Times,” is sufficient to arm about 200,000 holy warriors. Not to be ignored is the death wish of religiously fired jihadists. That is how 800 IS attackers took Mosul from 30,000 government troops, after which their officers lamented: “We are fighting devils, not normal human beings.”

And now, in recent weeks, the IS has begun to take control of the dams along the Euphrates, which offers manifold opportunities for sabotage and extortion.

This is something coming to the region, but also to the rest of the world. which represents a completely new form of Islamist threat.