As mentioned in last night’s news feed, a British peer named Lord Scott suggested yesterday that more people should marry Muslims as a way of improving “relationships between faith groups”. During his brief speech in the House of Lords, Lord Scott mentioned as supporting evidence the fact that two of his children, one male and one female, had converted to Islam and married Muslims.

One can but wonder: did Lord Scott, as a result of the famous cluelessness so common among British aristocrats, accidentally let the cat out of the bag? Is the conversion of members of the landed gentry in Britain a growing trend? Is the British aristocracy in fact becoming Islamic in anticipation of what lies ahead?

It would be a prudent move on their part — they would remain the ruling class, acting as emirs under the new Caliph. Those who act now will get to keep their country estates and privileges — and even acquire new ones! And no respected Islamic peer has to give up any of his little, ahem, customary pastimes, provided he continue to be discreet about them.

How many, including Prince Charles, are low-key converts? No formal announcement is needed: one simply says the shahada in front of a trusted imam who understands the utility of recruiting high-ranking converts whilst keeping the proceedings quiet. And, at the same time, keep knighting more Muslims such as Baroness Warsi, adding them to the peerage.

Our British correspondent JP has prepared a little treatise about Lord Scott, accompanied by the official parliamentary record of yesterday’s exchanges between the noble lords and ladies in the House of Lords. 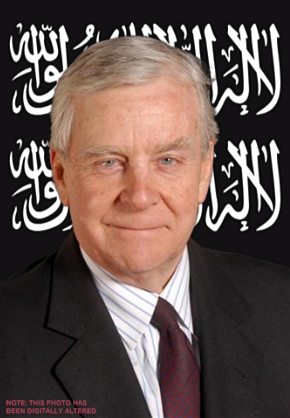 Baron Dhimmi of Foscote
by JP

Richard Rashleigh Folliott Scott, Baron Scott of Foscote, not to be confused with either Lord Scott Disick, Lord of Our Manor of Cruckton Ford and US reality television star of Keeping up with the Kardashians or potential suitors of Lady Gaga hoping to become Lord Gaga, caused a minor stir yesterday when he extolled the virtues of marrying Muslims as a means of combating Islamophobia.

It is possible that the noble and right reverend Lord is onto something and here are five other suggestions for the government to consider in its unstinting efforts to nudge Christians and others into contented acceptance of Islam.

The debate as recorded by Hansard, including ever so slightly gaga remarks by Lord Scott:

Asked by Lord Carrington of Fulham

To ask Her Majesty’s Government what measures they plan to take to improve the relationship between the Muslim community and other faith groups in the United Kingdom.

The Senior Minister of State, Department for Communities and Local Government & Foreign and Commonwealth Office (Baroness Warsi) (Con): My Lords, the Department for Communities and Local Government published its strategy Creating the Conditions for Integration in 2012. This sets out the work of the Government and other organisations in helping to create the right conditions for everybody in society to participate. The Government are supporting projects to break down barriers, encourage community cohesion and celebrate what we have in common.

Lord Carrington of Fulham (Con): My Lords, I thank my noble friend for that Answer. With some young British Muslims being radicalised, does she agree that it is very important that they are taught at a very young age, either in school or elsewhere, to understand the similarities between all religions, in particular the shared values of the Abrahamic religions, so they can understand that Christianity and Judaism are not the enemies of Islam? Can she suggest the best way to make this come about?

Baroness Warsi: My Lords, it is important that all people, especially young people, have an understanding of the diverse communities in which we live, including different faith communities. My noble friend may be heartened to know from surveys, including a DCLG survey from a few years ago, that 90% of Muslims agreed that people from different backgrounds get on well, as opposed to 87% of the general population; 89% of Muslims agreed that it is possible to fully belong to Britain and maintain a religious identity, compared to 72% of the general population; and 74% of Muslims believe that there should be more mixing between different communities and different ethnic and religious groups, compared to 71% of the general public.

Lord Patel of Bradford (Lab): My Lords, will the Minister say what plans the Government have to work with the media to encourage them to stop publishing demonising articles about whole communities because of the actions of a handful of terrorists?

Baroness Warsi: As an ex-chairman of the Conservative Party, I wish I could get the media to stop publishing demonising articles. The noble Lord raises an incredibly important point. One of the strands of the work of the cross-government group on anti-Muslim hatred is looking at how we can work with the Society of Editors, among others, to ensure that headlines are, first and foremost, not sensational, but secondly, reflective of facts.

Lord Harries of Pentregarth (CB): Does the Minister agree that in many parts of the country, relations between Muslims and other faith communities are extremely good? This was true in the diocese of Oxford when I was there and continues to be so. Because of the good relationships between faith leaders, including Muslim leaders, it has been possible to dissipate many potential signs of trouble.

Baroness Warsi: The noble and right reverend Lord makes an incredibly important point. I am incredibly proud of the work that the Government have done in harnessing the power of faith groups to create that understanding. One flagship has been the Near Neighbours programme. The Government have invested £8.5 million since the start of this Government in the Church of England’s Church Urban Fund, using the network of the Church of England to create better understanding between different faith communities.

Lord Hussain (LD): My Lords, will the Minister tell the House if she thinks that the Government’s approach in dealing with the so-called Trojan horse issue is a help or a hindrance in the fight to tackle extremism in this country?

Baroness Warsi: My Lords, my noble friend makes an important point; everything that we do in tackling extremism must be done in a way that actually resolves extremism. Our language, our policy approach and our conduct must satisfy the end goal rather than the process.

Baroness Uddin (Non-Afl): My Lords, would the Minister take the opportunity to pay condolences to the family of the student Nahid al-Manea, who was brutally murdered on the streets of England? Does she accept that some of these very brutal attacks and the rise of Islamophobia are real reasons why some young people are resistant to working across different faith groups? I agree that an enormous amount of work has been done in this country. Would the Minister accept that England’s record in the arena of multifaith work is second to none?

Baroness Warsi: My Lords, the issue of anti-Muslim hatred and Islamophobia is something that I have personally championed. One of the first speeches that I gave in government was about Islamophobia. I used the phrase, “Islamophobia has passed the dinner-table test”—and probably still bear the scars of it. It is important that we fight this new form of hate crime and that the Government have, rightly, invested in projects such as Tell MAMA, to record and make sure the data on anti-Muslim hate crime are accurate and credible.

It is important to make another point; we have been here before. There have been moments in our history when we have not been entirely comfortable with a faith community and we have questioned the loyalty of faith communities, whether that was the Jewish or the Catholic community. But our trust in our institutions and values has got us through it—and we will get through it again.

Lord Scott of Foscote (CB): My Lords, I have an interest on this Question because one of my two sons has become a Muslim and one of my two daughters has become a Muslim. I have 12 lovely grandchildren, seven of whom are little Muslims—or not that little now, because one of them is 21. And, of course, I have a Muslim son-in-law and a Muslim daughter-in-law. Family relationships since those events took place have been as happily familial, as close and as good as any parent or grandparent could wish. If an improvement is needed in relationships between faith groups, one way of promoting that might be to encourage interfaith marriages.

Baroness Warsi: First and foremost, my Lords, it is important that we allow people to marry somebody of their choosing, whatever faith they belong to. That is why I am incredibly proud that the Government have done so much work on the issue of forced marriages, including criminalising a practice that should have been criminalised many years ago.

34 thoughts on “Lord Dhimmi of Foscote”