In a follow-up to last night’s post, our Israeli correspondent MC sends the latest from Sderot. 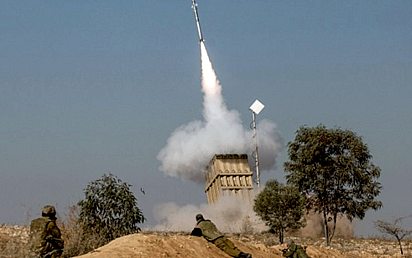 It is Shabbat today, so news is thin on the ground. Last night we had two Tzeva Adoms but no explosions (I understand that the missiles fell short). There have been missiles coming over further south, however. Yesterday the towns of Netivot and Olfakim were hit.

So the Algerian football team are going to donate their salaries to the terrorists attempting to murder us in our beds. How nice of them! Will FIFA take action against them? I doubt it….

And those Oslo politicians again… I sympathize with our Norwegian readers, who once more have a Quisling government paying lip service (and tax revenues) to modern religio-Nazis in the name of the Norwegian people. I meet the Norwegians who come and visit us here, they, who donate so much of both time and money to support relief in Sderot; they do great work through charities such as Hands of Mercy.

HOM visits traumatised people, like the woman waiting at a bus stop at 8:30 in the morning two days ago, who watched helplessly as a missile slammed into the side of a house 100 meters away. She was left shaking, a nervous wreck.

She is one of many who display the exact same symptoms of shell-shock that society has so casually dismissed in the past. Although she has other needs, she really needs to know that people care about her (and all of our) plight.

The people of Gaza reportedly get massive amounts of foreign aid, much of it from the West, particularly from Oslo, but this aid is used to manufacture the missiles that we, their victims, have to endure. Somehow this aid never quite reaches the needy in Gaza. Like the North Koreans who starved to death whilst their government financed nuclear weapons, so Gazans go hungry to support Qassam production. They have no choice — Gaza, too, is a tyranny.

You can help, you can directly aid Sderot by pressing the Sderot button on the sidebar and making a donation to Hope For Sderot, or by donating on the HOM website (above). If you prefer a more Orthodox approach, donate to Rebbe Pizum at the Sderot Chabad. You can also sign the petition here. US citizens can use this site to communicate with their representatives.

Hamas have now got the big boys out. Beersheva was hit by a Grad about thirty minutes ago.