It hasn’t even been a full day since MC’s previous report. Since then the war in Gaza has intensified even further, with rockets being fired (and intercepted by Iron Dome) over central Israel in the vicinity of Tel Aviv. 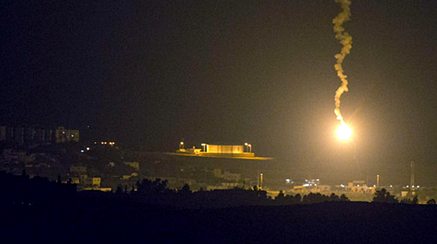 It is just a few short weeks since Hamas kidnapped and murdered three Jewish children and here we are with a major battle raging within a few kilometres of us.

Has anyone notice that Hamas is desperately trying to play the innocent party?

ISIS held a rally in Gaza last month. Its successes appear to have greatly boosted terrorist confidence. The PA is now openly flying a swastika in the West Bank. The BBC has warned people not to believe what appears to come out of Gaza as well. 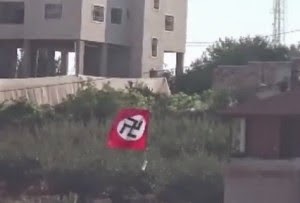 We are hearing almost continuous explosions now, there has been a missile intercepted close to Tel Aviv by Iron Dome…

So here we are, and its time to consider what happens after the gold Gaza rush. Is there any option but for Israel to retake Gaza? Not to do so this time is just to shelve the problem for another day. But what will Barry Soetoro do then?

Another source in Israel writes:

From Israel I can tell you that the leaders of Hamas have gone underground and have destroyed their mobile phones. Some of the Sayeret have been called in and within 72 hours the 40,000 reservists together with the tanks and armoured humvees will be on the border. The people of Israel and the government this time wish a large cleanup in Gaza and I think that they will enter parts of the Gaza strip on Thursday.

I have Israeli TV open all the time and am listening in.

The Iron Dome rocket defense system intercepted a projectile near Tel Aviv over the city of Rishon Lezion on Tuesday evening, as air raid sirens sounded in central Israeli cities for the first time amid recent escalations.

No injuries or damage were reported in the attack, which marked a widening of the range of rocket fire the Gaza Strip.

It was the first Gaza rocket that reached Tel Aviv since Operation Pillar of Defense in 2012.

Following the attack over central Israel, the Home Front Command instructed the Tel Aviv Municipality to open public bomb shelters in the city.

The Home Front Command had earlier instructed Tel Aviv residents to prepare for utilizing protected rooms and shelters in their private homes.

Under the same instruction, the division responsible for civil security ordered for bomb shelters in Tel Aviv schools to be opened.

The IDF launched Operation Protective Edge in the early hours of Tuesday morning in order to quell the ongoing barrage of rocket fire from the Gaza Strip. Later in the day, the IDF begun actively calling up 40,000 reserves approved to it by the cabinet.

Palestinian rocket fire from Gaza continued to pound southern Israel throughout Tuesday, with some 80 rockets landing in Israeli territory by the evening. Iron Dome made 23 interceptions throughout the day, shooting down projectiles over Ashdod, Ashkelon, and Gaza border communities.

Meanwhile, the Israel Air force struck 150 targets in Gaza, and Palestinians reported multiple casualties in a number of the strikes.

Some 100 underground rocket launchers and ten attack tunnels were among the targets.