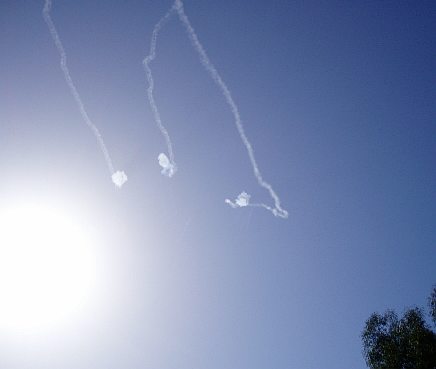 Our Israeli correspondent MC sends this photo of Iron Dome intercepting a missile from Gaza over his house in Sderot at about 4:30 pm today, Israeli time.

Iron Dome appears to bracket the incoming missile and then there were three distinct explosions, I don’t think it is an ‘expanding loop’ type, it seems more like two ‘focussed’ percussions which set off the warhead of the incoming missile, The right-hand trail seems to have made a sharp turn in towards the centre track which I assume is the incoming.

Iron Dome seems to be taking down the bigger, heavier Grads and Katyushas as well as the Iranian missiles. It has proven to be very effective and we may well owe our lives to it. So far it has certainly rendered Hamas impotent — they have nothing to hit us with, the combination of the effective air raid warnings, bomb shelters and Iron Dome has stopped any fatalities as yet.

3 thoughts on “Iron Dome in Action”