The “occupation” of the Gerhart-Hauptmann School in Berlin-Kreuzberg is more a story of German leftist madness, rather than cultural enrichment as such. The cosseted mascots of the piece are the “refugees” who staged a sit-in on the roof and threatened suicide, but the real political drama is the one being staged by (and within) the Green party in Berlin.

Now that the planned forced evacuation of the building has been aborted, the crisis is in abeyance — for now. Our Canadian correspondent Rembrandt Clancy has written an overview of what happened, with translated quotes from German press accounts and a subtitled video.

This was a tough one since the situation kept changing, and information gets dated. But at least there was a resolution of sorts on Thursday, which also helps round off the project itself.

Madness is the stable ingredient which unifies the story. 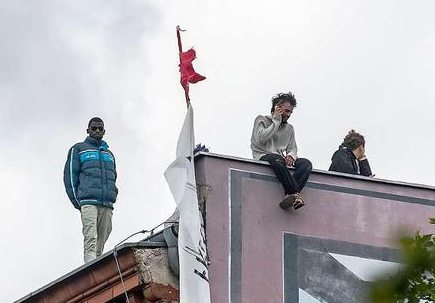 Extortion in the Asylum
by Rembrandt Clancy

In Berlin, a bizarre story unfolds of a municipality lingering in a twilight zone between law and order and Green anarchy, with the momentum more in favour of the latter than the former.

“Refugees” have been illegally occupying a school in Berlin-Kreuzberg for about a year and a half. They demand permanent residence status and threaten to commit suicide by jumping off the building if the police attempt to evict them.

The Gerhart-Hauptmann School is on the Ohlauer Straße in Berlin-Kreuzberg, a borough of Berlin governed by the Greens, with a Green mayor, Monika Herrmann. According to the Berliner Morgenpost (6 October 2013), the plan was

… to make out of the school a project house for refugees. Instead those responsible for it have admitted that they have no idea who lives in the house.

anxiety above all. Drug dealing, assaults and rapes belong to the behaviours of this lawless house. The police have had to respond 24 times since 8 December! (Berliner Zeitung, 16 November 2013)

“Many here booze, booze and booze, because they are desperate and then they become aggressive.” (Der Tagespiegel, 14 November 2013)

On 16 November 2012 the Berliner Zeitung describes the school’s occupants and their effect on the neighbourhood:

Approximately 200 people presently live in the building, no longer only refugees. Also Roma families, homeless people and junkies have arrived there. […] The local residents feel abandoned. At night there is constant brawling. “I no longer feel safe,” one neighbour said.

Among the most serious crimes connected with the illegal occupation of the school are the knifings. Focus reported a serious case on 25 April 2014:

[A] 29 year old man from Morocco was stabbed … in the shower of an outbuilding in front of the school. […] The victim died in the ambulance. […] In the preceding months police had been called to deal with brawls and knifings. Drugs were also seized, said the paper.

BILD describes a threatening scene of Friday, 27 June where the occupiers appear to be equipped with ordnance:

Bizarre scenes unfolded on Friday in Berlin: 40 refugees entrenched themselves on the roof of the Gerhart-Hauptmann School in the borough of Kreuzberg. They had Molotov cocktails and gasoline with them. They demanded to speak with journalists, and the police placed a wide cordon around the area.

Also on Friday, 27 June, the Berliner Kurier quotes Borough Councillor Peter Beckers on the extortion aspect of the situation:

“The refugees had threatened to jump from the roof if the police intervene.”

According to the Berliner Morgenpost (1 July 2014) there has been a recent change in the demographics of the occupancy:

The previous Tuesday, most [of the 200 occupants] accepted the offer to move to other accommodation. About 40 persons declined to leave and demanded the right to permanent residency in Germany.

“Many of the remaining illegal occupiers of the school are from Africa and have no claim to asylum (Rundfunk Berlin-Brandenburg (rbb)).

The Situation Reaches a Crisis

The police issue an ultimatum to the borough:

“… Police Constable Klaus Kandt: “We only provide assistance”. If the Borough does not accept that all refugees are to leave the building, we will dismantle everything and return to our quarters”. […] But what follows the dismantling of the barriers is also clear: the school will very quickly “fill up” again with people (taz.de).

Of course there is also a cost to the standoff:

In the past week about 1,000 police officers per day were on duty, about 500 active at any one time. It is not known how much money the deployment costs (rbb).

“How helpless and disoriented the politicians are”, writes BILD:

40 squatters plunge Berlin’s politics into chaos! Most notably the Greens! On Tuesday at 12:45 the police received a fax. After a week of unsuccessful negotiations with refugees, Kreuzberg’s Councillor for Buildings and Construction, Hans Panhoff, (56, Greens) requested the police to clear the school for reasons of security!

Panhoff’s move indicates a split among the Greens over the occupation of the school. There is also a question of the Greens submitting to manipulation, perhaps willingly, as one might infer from the continuation of the BILD report:

At the same time the Green State Association put out this press release: The police should not clear out the building, but should first of all please send a psychologist into the occupied premises. Shortly thereafter, there was a third Green-announcement, this time coming out of Friedrichshain-Kreuzberg:

“We, as Greens, reject a violent eviction. Alone by virtue of the credible suicide announcement of the remaining refugees, such a thing is simply irresponsible”. And still more confused: “Apparently the Berlin state government was asked to provide solo assistance in the negotiations. Nor do we know what that means in any case. The news and rumour situation changes by the minute.”

The video which follows shows the police action in clearing demonstrators from the area round Gerhart-Hauptmann School. Near the end of the clip, the demonstrators taunt the police by chanting what is for them a well-known slogan: “Where, Where, Where were you in Rostock?” (Wo, Wo, Wo ward ihr in Rostock?). For the leftist protestors, the issue is reminiscent of the notorious riots in Rostock in 1992, before many of them were born. In that case, a large number of immigrants were accommodated in a giant apartment complex and were deleteriously affecting the surrounding community. In the early stages of the unrest, police failed to protect the housing block. The immigrants were driven out of the building, the structure itself was partly set on fire and it sustained other damage as well; hence, “Where were you in Rostock?” (cf. Der Spiegel, Chronology).

It is much appreciated that Carpe Diem supplied the German-language transcript for the video, and also the subtitle time-stamps:

Now what came of the evacuation of Gerhart-Hauptmann School by the police? Briefly put, the 40 immigrants are not to be evicted after all.

The Südwest Presse reports (3 July 2014) that by the city administration’s own report, a “peaceful solution” was found.

After negotiations with the occupiers yesterday, vacating the building was averted, according to borough and police spokesmen. The approximately 40 refugees are allowed to remain in a delimited area of the fourth floor of the school, provided they collectively, and in conjunction with the borough, refuse to allow new additional refugees to enter. The refugees signed an agreement late in the evening, under the terms of which the district withdraws the eviction request.

Focus provides information indicating that occupiers, who are above the law, will continue to be maintained by the taxpayer. “De-escalation” is the key:

According to local media reports it was agreed that in addition, the roughly 40 remaining refugees … will not be prosecuted for contravening the right of residence law and they will receive house identity cards. Surveillance duty is to be transferred to a private security service; but until they begin their employment, the police, at the request of the borough, will remain on location with reduced manpower.

The Green representative, Hans-Christian Ströbele [Greens], who was present at the negotiations, did not consider the breakthrough […] as “grounds for jubilation”, but nevertheless as a “success for the refugees” and an “important contribution to de-escalation”.

Hans-Christian Ströbele (75) is a member of the German Bundestag. As a lawyer he defended the murderous Red Army Faction (Rote Armee Fraktion), and in 1983 “was convicted […] of supporting terrorist groups through his smuggling of information between members serving in prison” (Wikipedia). Mr. Ströbele, member of the “the child-sex party, the Greens” (Akif Pirinçci) is in favour of incest, provided of course it is consensual (cf. interview in English with Ströbele at The London School of Economics and Political Science).

Politically Incorrect, which referenced many of the above press reports, close their own account of the occupation of the Gerhart-Hauptmann School this way (3 July 2014):

The terrorist-defender, Hans-Christian Ströbele, was decisive in leading the negotiations.

And Bananastan is now more enriched because of an attraction (Lat. ad trahere = to pull toward oneself), and it has proved to the entire world that impertinence here pays off. This example will catch on.

Today at 12:45 PM the Berlin police received an order from the Friedrichshain-Kreuzberg administrative office to clear the school building, and we have now received this order, and now we are first going to consider exactly how to proceed.

What you’re doing is wrong!

Germany you Pig-State! We’re so full of you we could puke!

Does that hurt? Very slightly. OK! It’s all right. Stop.

OK, now you have to go to the hospital. That has to be X-rayed.

We are peaceful. What are you?

And then at some point they arrived in their uniforms, and then just began to split people up. They just hammered people. They threatened them.

They partially laid on top of us so that we could no longer move.

They struck nerves so that it was really painful.

And it’s a matter of relative indifference to them whether they injured us or not.

5 thoughts on “Extortion in the Asylum”