Dr. Ramelah’s essay was written before Mr. Kerry’s most recent ceasefire proposal was rejected by Israel. 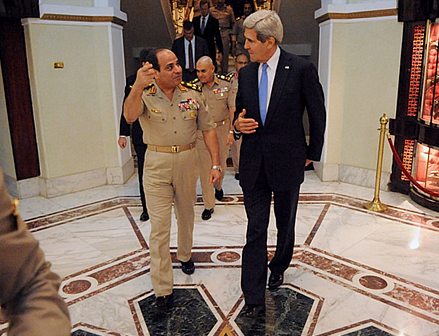 Egypt’s “cold war” with the U.S.
by Ashraf Ramelah

An unusual security search at the entrance of the Egyptian presidential palace in Cairo took place two days ago as reported by Egyptian newspapers and the Italian RAI 24 news. John Kerry and his staff were asked to go through a metal detector, and one staff member was asked to show the contents of his pockets before visiting President Al-Sisi. This humiliating reversal of protocol was a sign of mistrust towards the U.S. by an Egypt never shy about expressing hostility for America’s support of the Morsi regime. Kerry’s visit to Egypt was for the purpose of brokering peace between Israel and Gaza (the Hamas terrorist organization).

However, was President Al-Sisi merely reflecting the animosity of the Egyptian people towards the Obama administration and posturing to score points with Egyptians? Or was Al-Sisi’s motive to emphasize Egypt’s sovereignty to an Obama administration for America’s egregious error in backing the former terrorist-backed president, Morsi — not standing for and with the Egyptian pro-democracy majority? Al-Sisi’s coldness counters a U.S. State Department unwilling to let go of America’s glaringly wrong position. Western media’s “military-coup general” is turning out to be Egypt’s best prospect for human rights and democratic ideals up to this point.

Egyptian pro-democracy freedom fighters who backed Al-Sisi for president, have been icy and caustic towards the U.S. since lobbing tomatoes at Hilary back when she visited Egypt in support of the Muslim Brotherhood “freedom-fighters.” That was the moment the Western media reversed the facts in Egypt’s revolution saga. Referring to the MB as freedom-seekers, this “fact” became the premise underlying all reports to date.

After three and a half years (with two interim governments and two elected presidents) and the brutality of the Morsi MB-backed regime gone, the U.S. and the Western media stick to their narrative that characterizes the current popular president, Al-Sisi, as undesirable. But according to ordinary Egyptians yearning for a better economy and the freedoms and rights of Western democracy, President Al-Sisi is their only option. So far, only the Muslim Brotherhood and its sympathizers are afraid of Al-Sisi. Looking back to day one of Morsi’s presidency, Egyptians had only suspicion at first followed by contempt then dread. The populace was cowed; whereas today’s Egyptians have relevance and strength.

While Kerry and his staff came under scrutiny during security measures at the presidential palace, the Arabic Al Hayat news was reporting that President Al-Sisi declined President Obama’s invitation to participate in the African summit next week in the U.S. Egypt had not been invited to the earlier African summit held on its own continent this year at a time when Egypt’s interim government held power upon the fall of the Morsi regime. The U.S. sponsors overlooked Egypt for this important summit held in Egypt’s backyard when the ignoring of anti-Morsi, anti-Brotherhood leaders was of key importance to the U.S. administration on behalf of the corrupted Morsi regime.