MC’s latest report from Sderot comes as the rocket attacks from Gaza intensify, as does the Israeli response. 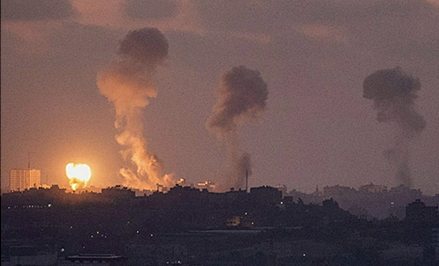 We await the start, we listen to the best broadsides of the PA propaganda cannonades, knowing that we have the means to crush them, but do we have the will?

In Islam there are no good men or bad men. There are only believers and unbelievers. The actions of believers are ‘good’, and the actions of unbelievers are ‘bad’ — it’s simple, stupid! Too simple for the Western world to understand. A world clothed in the rags of a morally impoverished Judeo-Christianity and ravaged by a century of multicultural relativity.

The West is desperate to be the good guy, to appear rational and sane (and intellectually superior) to all and sundry, but the sun-dried guys from the desert just want to win. They don’t give a pork chipolata as to how. And if it takes lies and deception, then so be it. More fool those who are gullible.

I hate the fact that the IDF are very likely to invade Gaza in the very near future, my son with them, but it has to be done. Today they fired missiles at Tel Aviv, big missiles with big warheads, missiles that will take down a whole building housing 20 or 30 families. Think of it in the context of a city near you, maybe even the one you are in now. Where would you go to escape the lethal flying shards of glass?

On the bright side, here in Sderot we have only had four ‘Tzeva Adoms’ so far today, and one appears to have landed in the city, but we have some big artillery pieces nearby. We get no warning when they go off — it keeps us very jumpy.

The Pallies have also been infiltrating, their objective being to brutally murder those who cannot defend themselves. To the Gazan mind, the cold-blooded decapitation of a two-year-old is a great victory. I would remind all those who give material and vocal support to Hamas that they too are complicit in this kind of coarse brutality.

Collateral damage is one thing, and regrettable when it involves children, especially those purposely put in harm’s way. But the specific targeting of children, the very thing which triggered this war, is what the liberal Left is supporting, if only they were intellectually mature enough to admit it.

Stupidity is as stupidity does.

“[…] it has remained for man alone among all creatures to kill senselessly and wantonly for the mere pleasure of inflicting suffering and death.”