In today’s report, MC takes a look at UNWRA, an entire agency of the United Nations that for all practical purposes is devoted to the care, maintenance, and indoctrination of Palestinian “refugees”. 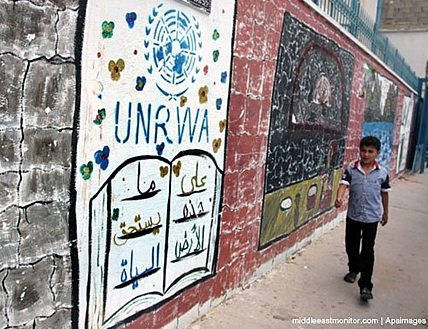 UNRWA (United Nations Relief and Works Agency) is a sinecure, an expensive sinecure that pays its executives very well. It is the only organisation in this world that supports the idea of hereditary refugeeship, and thus perpetuates its own role, as paid for by the taxpayers of the USA.

This organisation were caught with their pants down the other day. Some 20 missiles were ‘found’ in one of their schools. Of course they knew nothing about this cache.

They duly handed the missiles back to their owners: HAMAS, a proscribed terrorist organisation specialising in the genocide of Jews. Maybe those were the missiles arrived on our doorstep this morning, Iron Dome took out several; one landed and caused a fire.

It is time for UNRWA to be disbanded. All the refugees from 1948 should now have been absorbed into their host communities. The Jewish ones certainly have, but then they did not get one cent from UNRWA. UNRWA is only for Muslims, and is part of the Middle East problem, perpetuating the hatreds whilst paying proto-terrorists to study their trade and to learn to live at the expense of others.

My alarm clock this morning was a pair of Apache helicopters shooting their cannons at infiltrators. The Apaches were less than a mile away. The battle is continuing with the same intensity as before.

There are many people the West who believe that if Israel were to cease to exist, then peace and goodwill would rapidly become apparent throughout the world.

They therefore believe that Muslims in China, Thailand, Burma, India, East Timor, South Sudan, Chad, Nigeria, Somalia, Kenya, Uganda and Mali would lay down their arms and live in peace with their neighbours if only the demmed Jews in Israel would just give the land back to the Palestinians and somehow evaporate themselves off the world scene. Only in that way would World War 3 would be averted.

O Rose thou art sick.
The invisible worm,
That flies in the night
In the howling storm:

Has found out thy bed
Of crimson joy:
And his dark secret love
Does thy life destroy.