MC wraps up his first two weeks of reporting on the Hamas missile attacks, with no end in sight. 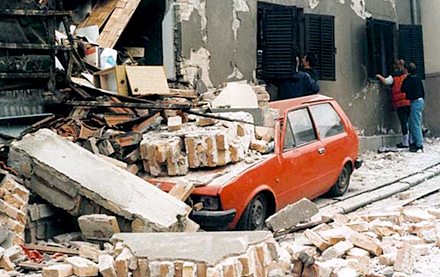 Bigot: one who regards or treats the members of a group (as a racial or ethnic group) with hatred and intolerance.

It is half past three in the afternoon. the missile attacks re-started within minutes of the end of the hudna humanitarian truce. Not that they really stopped — there were multiple violations on the part of Hamas, but then one expects that. This is called bigotry, when I expect Hamas to be incapable of ‘civilised’ behaviour. Bigotry is very common when Judeo-Christians interact with Muslims, such as when the European Union bombed innocent civilians in Serbia:

It reported that as few as 489 and as many as 528 Yugoslav civilians were killed in the NATO airstrikes. NATO spokesman responded to claims Jamie Shea said, “There is always a cost to defeat an evil,“ he said. “It never comes free, unfortunately. But the cost of failure to defeat a great evil is far higher.” [emphasis added]

I am a bigot because I see the blatant EU hypocrisy. The EU and the USA were both guilty of taking the side of Islamic aggressors against peaceful civilians, but the USA is not ‘condemning’ civilian casualties in Gaza to the extent the EU is.

I see the professionalism of the Israeli Air Force on a daily basis. They will abort missions rather than hit civilians. The EU/NATO strikes against innocent civilians in Serbia did not have to cope with human shields either, but their hit rate against Serbian civilians was much higher, and there are accusations that they purposely targeted civilians.

I am a bigot because, as I see it, the EU behaved like animals in Serbia, and I feel ‘superior’. The EU fell for the story told by a Muslim terrorist movement; the Kosovo Liberation Army (KLA). They believed the taqiyyah and bombed innocent Serbs because they too became 7th century barbarians. So now they are believing the taqiyyah of Hamas, a proscribed terrorist group, against that of Israel, a sovereign Jewish nation.

If it is bigotry to see an ethnic group as inferior, it is therefore bigotry when one allows Muslim terrorist states special consideration to “kill the Jews” and escape any international criticism.

Either that or there is an alternative agenda.