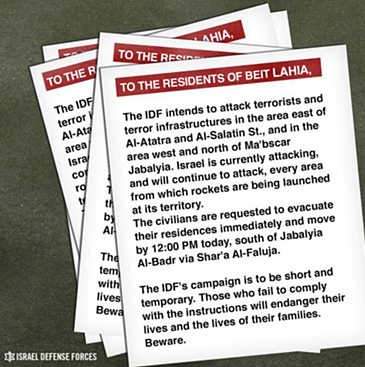 I have always felt that fundamentalist Islam is a form of insanity. Perhaps Mohammed’s obvious “Personality Disorder; Narcissistic personality” is contagious and can be induced in others, especially males, through close contact with Islamic ritual. Only this would explain the kind of hysterical behaviour now emerging from the Gaza Strip, where once more they seem to be executing supposed Shin Bet operatives.

It is very frustrating when your well planned (and expensive) offensive to kill Israelis in large numbers results in a just few injuries and some ‘secondaries’: elderly ladies having heart attacks whilst trying to get under cover, and a few RTAs as a result of air-raid sirens.

The support from the Canadian government is a refreshing dose of truth amongst the mendacious statements of the world elites.

Whist Hamas tries to create mayhem across the country, Sderot is quiet. The big Chinese-designed Syrian-made M-302 missiles with their 175-kilogram warheads have no short-range capability; they go over our heads. But they also seem to be wildly inaccurate as well, so those which are threatening built-up areas are easily taken out by Iron Dome. Yahovah also seems to have a penchant for protecting His land.

There is now talk of isolating Gaza, of cutting all movement and aid. It is about time that this weapon is added to the conflict. One of the few effective anti-terror campaigns was carried out by the British in the Malaya (now Malaysia) in the fifties. They used this same tactic: they laid siege to a village, but set up a soup kitchen outside the village to feed bona-fide villagers. The villagers had to pass through a security screen to get food and water, and were not allowed to take anything back with them. The insurgents were soon flushed out. This kind of action would be considered non- PC in this day and age, when terrorists are deemed to be ‘militants’ rather than self-centred and murderous trash, and have to be allowed food, water, electricity and medical supplies at the victims’ expense.

Once more, thank you for the donations everybody. I think there is another pizza run tomorrow!