The following report from the Tennessee Council for Political Justice combines newsletters #134 and #135.

Predictably, CAIR (Council on American Islamic Relations) is standing in defense of Hamas using civilians as human shields as Israel….

Predictably, the Executive Director of the pro-Palestinian D.C. think tank, the Jerusalem Fund/Palestine Center, when asked directly, will not answer the simple yes/no question:

“Is Hamas a terrorist organization?”

CAIR was founded by members of the Muslim Brotherhood’s Islamic Association for Palestine, which was created to promote and raise money for Hamas in the U.S. Federal prosecutors have established ample evidence tying CAIR to Hamas. In 1994 CAIR Director Nihad Awad publicly declared his support for Hamas.

The Jerusalem Fund and Palestine Center was founded by Hisham Sharabi who described Hamas as “the true fida’i (self-sacrifice) resistance in Palestine since the outbreak of the Palestinian intifada.” In 2003 he said:

“In the face of relentless Israeli force, the only weapon the helpless and desperate have is to fling their bodies against the beast. Suicide bombings are no longer the lone act of desperate fanatics, but have become a conscious weapon of resistance and war. The culture of death and self-sacrifice is spreading in many Arab and Muslim countries.”

Jerusalem Fund Chairman is Subhi Ali from Waverly, Tennessee. He joined the Jerusalem Fund in 2000, became Vice-President in 2004 serving alongside Sharabi and then became President of the Board in 2005, a position he still retains. The Jerusalem Fund campaigns for boycott, divestment and sanctions (BDS) against Israel. This is a campaign, the intent of which is widely recognized, to try and destroy the state of Israel.

Shortly after Samar’s hiring, questions were raised about why the Haslam administration hired a sharia finance specialist but redacted these credentials from information about her that was released to the public.

Now pro-Hamas rallies in Tennessee with Muslim organizations are spreading Jew-hatred. Given the information above, we shouldn’t be surprised. 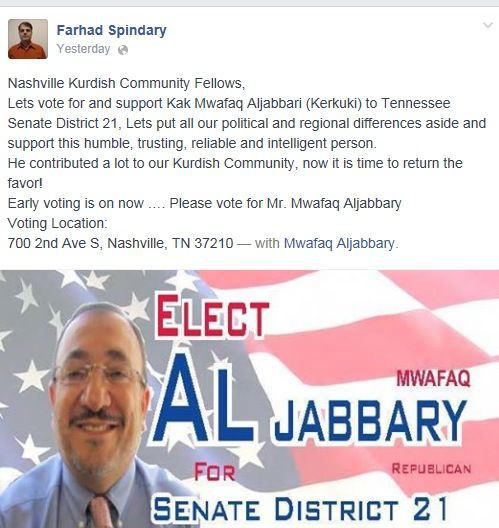 So here’s what this Kurdish Muslim is saying:

Vote for Aljabbary because he is one of us, a Kurd. It doesn’t matter what he says he will or won’t do. Once he is elected he will ALWAYS put Muslim needs first. He has to because that is what Allah commands him to do and he is a very observant Muslim. Otherwise he would not have been the president of his mosque.

We don’t care whether he will represent anyone else that lives in our district. Catholic Charities brought us Kurds to Nashville and we want more of us here. Aljabbary has lots of experience in refugee resettlement, and if, elected, he could help bring more of us! This is how we will have the kind of political power we still don’t have in our real homeland. Besides, we are commanded to bring this political jihad to the West.