Max Modine is a long-time reader and commenter at Gates of Vienna. His first guest-essay concerns the 1916 Easter Rising in Ireland, and its relevance to today’s events. 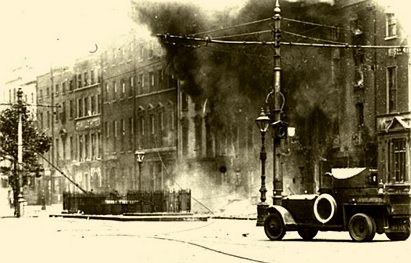 Whistles the Wind
by Max Modine

It was Easter Monday, April 24rd 1916. 200 everyday men walked down Sackville Street in Dublin led by the schoolmaster and Irish language activist Padraigh Pearse, joined by James Connolly and his small band of labour unionists, along with 200 members of Cumann na mBan, nurses and women of menial employment. The group seized key locations in Dublin and proclaimed the Irish Republic independent of the United Kingdom.

IRISHMEN AND IRISHWOMEN: In the name of God and of the dead generations from which she receives her old tradition of nationhood, Ireland, through us, summons her children to her flag and strikes for her freedom.

Having organised and trained her manhood through her secret revolutionary organisation, the Irish Republican Brotherhood, and through her open military organisations, the Irish Volunteers and the Irish Citizen Army, having patiently perfected her discipline, having resolutely waited for the right moment to reveal itself, she now seizes that moment, and, supported by her exiled children in America and by gallant allies in Europe, but relying in the first on her own strength, she strikes in full confidence of victory.

We declare the right of the people of Ireland to the ownership of Ireland, and to the unfettered control of Irish destinies, to be sovereign and indefeasible. The long usurpation of that right by a foreign people and government has not extinguished the right, nor can it ever be extinguished except by the destruction of the Irish people. In every generation the Irish people have asserted their right to national freedom and sovereignty; six times during the last three hundred years they have asserted it to arms. Standing on that fundamental right and again asserting it in arms in the face of the world, we hereby proclaim the Irish Republic as a Sovereign Independent State, and we pledge our lives and the lives of our comrades-in-arms to the cause of its freedom, of its welfare, and of its exaltation among the nations.

The Irish Republic is entitled to, and hereby claims, the allegiance of every Irishman and Irishwoman. The Republic guarantees religious and civil liberty, equal rights and equal opportunities to all its citizens, and declares its resolve to pursue the happiness and prosperity of the whole nation and all of its parts, cherishing all of the children of the nation equally and oblivious of the differences carefully fostered by an alien government, which have divided a minority from the majority in the past.

Until our arms have brought the opportune moment for the establishment of a permanent National, representative of the whole people of Ireland and elected by the suffrages of all her men and women, the Provisional Government, hereby constituted, will administer the civil and military affairs of the Republic in trust for the people.

We place the cause of the Irish Republic under the protection of the Most High God. Whose blessing we invoke upon our arms, and we pray that no one who serves that cause will dishonour it by cowardice, in humanity, or rapine. In this supreme hour the Irish nation must, by its valour and discipline and by the readiness of its children to sacrifice themselves for the common good, prove itself worthy of the august destiny to which it is called.

Signed on Behalf of the Provisional Government.

All of the above men were executed by the British Government for their efforts in trying to secure a free Ireland.

The guns of Brittanie responded in brutal retaliation; monster naval guns available to only the great powers of the time, aimed at fewer than 500 husbands and wives and teachers and architects and millers and nurses occupying the General Post Office building near the banks of the river Liffey. What did Pearse and his boys have? Not much. Fewer than 100 rifles and a few Webley revolvers.

For six days they bombarded them and killed many of them. Afterwards they executed Pearse, and tied a dying Connolly to a kitchen chair and shot him as well.

They buried Pearse and Connolly along with Tom Clarke, Joseph Plunkett, Thomas McDonough, Éamonn Ceannt and Seán MacDiarmada, the seven signatories of the Irish Proclamation, covered in quicklime, as was a traitor’s due at the time, to destroy the bodies, as a signal to the Irish of the terrible punishment facing those who rebelled against the Crown.

Eamonn DeValera narrowly escaped execution in large part due to his being born in the United States of America. The Crown was cognizant of the power of the significant Irish voting bloc in America and the Crown desperately needed America, its manpower and resources to offset its massive losses of both on the battlefields of Europe in 1916.

Why do I bring this to your attention? There is a greater combination of communistic and Islamic evil manifest in the current government of the United States than the despotic government American patriots rebelled against in 1776.

The small band of Irishmen and Irishwomen who walked resolutely to their inevitable death in 1916 — only 98 years ago — followed a thousand-year cycle of never-ending refusal to accept an occupying regime of slavery. Ireland achieved its independence in 1923. America, I say this to you: If you do not rise up now and confront the tyrant resident in Washington your children and grandchildren and great-grandchildren will live in slavery to socialism and Sharia, in perpetuity.

35 thoughts on “Whistles the Wind”