Ashraf Ramelah’s latest essay concerns Pope Francis’ visit to Israel, connecting it with the recent elections in Egypt and the EU. 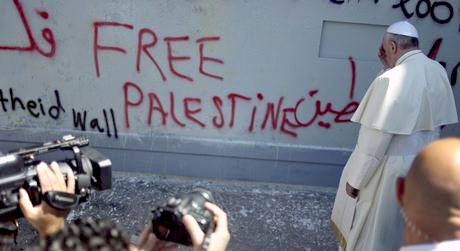 The Pope, the Field Marshall, and the EU “earthquake”: Standing or succumbing to Islamist pressures?

Many do not think of the Vatican as an independent, sovereign city-state with its own diplomatic envoy, Secretariat of State and embassies around the world. Most think of it as the home of the beloved Pope and the headquarters of the Catholic hierarchy. The Catholic Pope, both spiritual leader and head of a tiny kingdom in the center of Rome, is the only absolute monarch in Europe — exercising legislative, executive, and judicial power over the state.

So when the Vatican spokesperson announced in advance of the Pope’s trip to the Holy Land this past month that his visit would be a spiritual journey in response to an invitation from the Patriarch of Jerusalem, the Vatican meant that the Pope’s visit would not be political. But the Vatican did not anticipate the Pope’s unplanned stop at Israel’s security barrier — a wall built by Israel 10 years ago to protect Israeli citizens from Arab-Palestinian suicide bombers — en route to Jerusalem.

Pope Francis stopped at two walls. Before visiting the Western Wall religious site he made an unexpected stop at Israel’s security wall. The controversial separation fence between Israel and Bethlehem has aided Israel in saving lives while being labeled the “apartheid fence” by pro-Palestinian voices. One photo circulating in the aftermath of the Pope’s visit to the security wall shows him making the sign of the cross to begin prayer. Next to him is giant, red-lettered graffiti, “Free Palestine,” next to bold black letters, “Apartheid wall” — the latter, ironically an accusation against Israel’s multicultural democracy. Did Pope Francis realize how his association with Palestinian rhetoric would appear in pictures published for his admirers around the world, and what it could mean?

The Pope’s sudden visit to the concrete barrier was atypical of a spiritual pilgrimage where the heart of Christianity awaited him at notable biblical landmarks. For the Pope to pray anywhere in public other than holy sites or sanctuaries would be considered unusual. And for what purpose? We can only guess. Leaving Hamas-held Bethlehem, the Pope paused in silence as he pressed his face and hands against a wall detested by Muslims around the world. He linked his own image to powerful Palestinian rhetoric. Photos around the world show him standing alongside “Bethlehem looks like a Warsaw Ghetto.” Such sentiments reverberate across the world to equate Israel with Nazism and Palestinians with Polish Jews. If we didn’t think differently of him, we would suspect that the Pope’s visit to this wall was a special gift for Palestinian Authority head, Mahmoud Abbas.

Another snapshot connects the Pope’s image with a forlorn child holding a Palestinian flag. The Pope is silent. The viewer needs to read his mind. He says nothing because his journey is spiritual not political. The images remain and foster speculation. Is the Pope’s ambiguity sending a political message for the Vatican after all? And coupled with the Vatican’s planned agenda for the Pope’s visit to the Holy Land that entailed a first stop in Amman, Jordan, then Hamas-held Bethlehem and finally Jerusalem (the origin of his invitation), one might get the distinct idea that the Pope’s trip represented from the outset the opposite of the Vatican’s announcement.

Egyptians paid almost no attention to the Catholic Pope’s historic visit — no comments one way or the other — odd, but not so much, considering the circumstances. Upon the Pope’s return to Rome, Egyptians began three days of voting which ended decisively with a new President. A candidate of the people’s choice was successfully elected — a far cry from the previous election consisting of delays and much mystery surrounding the outcome. In and of itself, it spells for the first time a moral victory for Egypt over political Islam and Islamic terrorism. Former military Field Marshal Abdel Fatah Al Sisi has won the people and won the country’s election, and any steps he takes now to further the direction he has already taken will be monumental for Egypt.

Meanwhile, at exactly the same time, the European Union elections shifted France’s representation to the right (and others as well: Greece, Denmark, UK, and Austria) in response to its controversial immigration problem — illegal Arab-Muslim populations coming from Morocco, Algeria, Tunisia, Libya and Egypt. Viewed as an “earthquake,” election results demonstrate that Europeans feel threatened by an Arab-Islamic “invasion” and want to secure their own identities, roots and cultures.

The advance of Euroskeptic groups (those opposed to the EU altogether) across Europe is due to a perception that the EU will accommodate and appease Islam, allowing and even promoting porous borders. Italy, however, which has the presidency of the European Parliament this semester and will lead, has created an opposite wave with the 40.8 percent win of Matteo Renzi’s Left-wing party (Partito Democratico) and is likely to be widely challenged by the minority Right and the Euroskeptics.

The Pope has followed up his trip with the recent visit of Israeli President Shimon Peres and PA Chairman Mahmoud Abbas to the Vatican — praying and advocating for a dialogue of peace. But the hope of Europe rests in political movements that will assure real peace after the much prolonged attempt at appeasement. This may ultimately jeopardize the stability of the EU threatening its dissolution, but all the better if it means regaining individual state sovereignty on matters of regulation, borders, immigration and culture.

6 thoughts on “The Pope at the “Apartheid Wall””