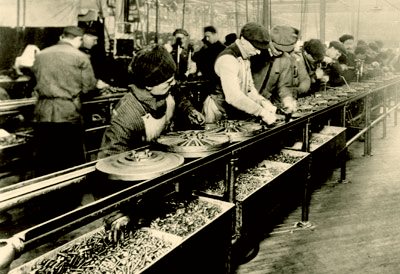 As most of you already know, we’re in the middle of this quarter’s fundraising week. For new readers: this is what we have to do to keep this blog going, in order to avoid taking on annoying advertisements on our sidebar. At least they’re annoying to me, but a number of our readers don’t seem to mind them so much. Which is fortunate, because we may end up having to put them up here after all, depending on how this week (and the following quarter) goes.

But that’s Dymphna’s job. She’s going to look into the ad possibilities while I avoid the whole topic, due to of the fear and loathing I experience when I consider web advertising.

My job, in contrast, is to discuss what it is that we do that we’re asking you to contribute money to help maintain. When I contemplate how to do that, my mind balks, because it’s so difficult to explain.

I wish I could do more writing, but I end up spending most of my time editing texts, communicating, and engaged in project management. A case in point: I’d been trying to write “The Jihad You Can’t See” for five days — I really wanted to — but more urgent matters kept intervening, including this fundraiser. There are a lot of things to do.

What you see posted here (and at other blogs in our neighborhood, such as Vlad, Tundra Tabloids, Snaphanen, and a number of others) is just the published result of what we do. But a lot of other less visible work goes on constantly behind the scenes.

The nature of this enterprise — the necessary work of a decentralized distributed Counterjihad network — means that most projects are parceled out among various people with differing skills. The role of “project manager” is constantly being passed around, depending on the nature of the job to be done. If video production is the main task, then Vlad Tepes or Henrik Ræder Clausen may well be in charge. If a polemical treatise (or even a research paper) needs to be written, I might end up managing it. If a meeting or public conference needs to be organized, Elisabeth Sabaditsch-Wolff is likely to be the brains behind it.

When any given project is complex enough, the responsibility for project management usually shifts from one person to another, depending on which particular skill is called for. Last year’s OSCE conference in Warsaw may well be the best example of what I’m describing. If you’re not familiar with what happens at OSCE events, see the OSCE Archives.

Last September in Warsaw was the first time I was able to experience the entire process myself. A large group of us attended the week’s events, and we had to spend more than a month planning for it. The papers had to be researched and written, the interventions and side events had to be planned, and the equipment (video, photography, and computers) had to be coordinated. During the run-up we all consulted among ourselves via email, skype, and phone, and — here’s the weird part — no one was in charge. From the point of view of an outsider, it would have seemed chaotic, but it wasn’t, really. The different tasks just seemed to sort themselves out and get distributed among those able to accomplish them. For any particular area, management usually fell to the person most competent to do the job.

For example, take the videotaping. That’s Henrik’s specialty, and he was in charge (Vlad was in Ottawa; his role came later). Henrik managed the cameras, the audio recording, the file transfers, the uploading, etc.

But that’s a very different job from, say, organizing a group dinner (sometimes including fourteen of us) and making sure everyone knew about it and was able to get there. That’s the sort of thing that Elisabeth excels at.

The organizing of our side events is a separate topic entirely, and a lengthy treatise could be written about how those were put together. Video equipment, audio, slideshows, food, advanced preparation of material — there’s a lot involved. Strangely enough, our greatest success that week was at someone else’s side event. Thanks to the adroit ad-hoc efforts of Maj. Stephen Coughlin, we were able to beard the “Islamophobia”-peddlers in their lair.

I initiated the counterattack that night, but I wasn’t really in charge of it. Project management has never been my forte. I prefer to be at most a second-in-command. I like to check attendees off a list as they arrive, or collect money from people for coffee and croissants, or keep computer-based records of the proceedings. Sometimes — particularly when the preparation of written material is necessary — I have to be in charge; it can’t be avoided. But I don’t like it, and I’m always relieved when the baton passes to someone else.

This is the nature of the group enterprise you’re supporting when you donate to Gates of Vienna. Dymphna and I are unusual in that we don’t have day jobs, but most of the others do. They’re all volunteers, and they fill up their spare time doing this instead of fly-fishing, or collecting stamps, or knitting scarves.

It’s a strange job, now that I think about it as I try to describe it. The rambling discourse above is my best effort to make sense of it.

Our assistant project managers chipped in from:

Many thanks to all the generous people who contributed. See you later this morning!

One thought on “Project Management”