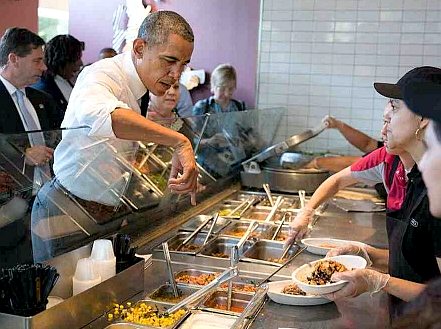 Our overweening political class tries so very hard to look “normal”. They massage, manage, and squeeze each encounter with the hoi polloi, twisting it to show their best, their common side.

Take President Obama (please, somebody). He so distrusts his fawning press that he won’t permit them to take photos of his royal self anymore. Sometime in the recent past the ruling came down from on high: the only pictures that would be permitted of Obama and subsequently distributed to the news services would be those taken by his own personal White House photographer. Associated Press could hang it up; they weren’t gonna get any photo ops from this administration. BHO was going to control his own image.

This increasingly disconnected administration doesn’t seem to understand the extent to which the MSM sold its soul to sell him. No matter what they did, it wasn’t enough. No one could ever do enough for His Majesty President Obama. 24/7 fawning was simply too little.

Thus his own photographer accompanies him everywhere, and only his own photographer’s pictures are allowed out to the public, at least in the U.S. where he has the power to control these situations. He may have to put up with indignities when he travels abroad, but here in the U.S., in public, he owns the images. And thus no “bad” photographs showing the slightest hint of mere mortality could ever be emitted from behind the magik negro screen.

Add to that White House photograph policy the well-known Obama penchant for self-assurance. He knows everything. This is one reason he doesn’t have to listen to anyone else. Whatever they have to say, he already knows it and he knows it better than they do.

So. Who’s gonna tell the Emperor he’s butt-naked and looks like a damfool? In this image for the ages, a recorded moment of presidential overreach, who’s gonna tell him to get his freakin’ hands offa the sneeze guard and stand back a few feet as the health laws dictate?

Ain’t no minimum wage minion alive who would dare to tell the Grand Poobah anything.

Nor does the royal photographer appear to know that he’s recording for posterity this big no-no, or that a normal person would’ve been told “please stand back”.

Don’t you wonder why the Secret Service agents in attendance didn’t say anything? Maybe they don’t eat fast food either?

For a normal person, this would be amusing. For a pompous ass, there will be an accounting. Somebody will be thrown under the bus for allowing this to out into the public view. For Mr. Thin-Skinned Obama in particular, for every goof there must be a sacrificial victim to take the fall.

Who will it be?

Whoever it is, this gaffe will not be Obama’s fault. No, sir. And you can bet everyone will know it’s not his fault.

Because Obama knows everything. He was just trying to make sure those folks were doing their job right.

Meanwhile, the regular press photographers, the ones Obama has kicked out of his sight, are no doubt ROTFLTAO. As they well deserve to do. Funny thing is, one of them probably would’ve warned him in time to avoid the huge peals of derisive laughter echoing down the halls of the Twitteverse.

That’s pretty sad, when you manage to so deeply estrange even those who were on your side and willing to sell their integrity for you. Well, it’s kind of sad, then. Oh heck…it’s richly deserved, actually.

So go put that on your golf tee and swing at it. MISTER President.