The following article by our Israeli correspondent MC is a more comprehensive report on today’s rocket attack on Sderot. It’s a follow-up on his post from earlier this evening. 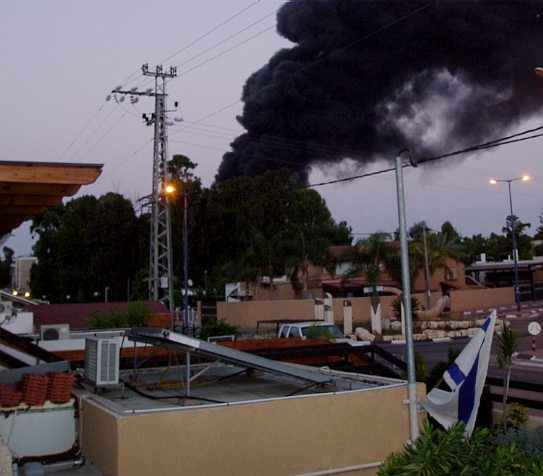 ‘Militants’? Pull The Other One!
by MC

Hamas have to justify their kidnapping of Israeli children somehow, so in typical Jihad fashion they commit even more ‘war crimes’ by sending missiles over, targeting Israeli civilians on this motzei Shabbat evening. They hit a factory which appears to have plastic or paint in it. This caused an immediate conflagration, with poppings and fireballs as chemicals exploded. The fire brigade were on to it very quickly and contained the fire.

My son and my daughter were visiting friends a couple of roads over. The friends have three young children, aged 2, 4 and 5. They were even closer to the blast than we were.

I had just flushed the loo as the Sever Adom went off. As I came down the stairs the explosions started. At least two missiles came in, but I heard three detonations (maybe Iron Dome got the other missile). The one buzzed and whined as it went over (my children say it went over their heads and then flash-lit the house).

At the sound of the alarm they quickly dressed the (very dopey) children — it was about 20:05 — and got ready for evacuation. By this time it was obvious that there was a chemical fire, so they closed the windows and watched to see which way the pall of thick dark smoke was drifting. Thank you Yahovah; it went away from the populated areas and down towards the south.

My youngest son then came across to see that we were OK. He is home for the weekend, from his service as a combat engineer in the IDF. He said it was a fire bomb rather than a shrapnel bomb, probably made of ‘co-op mix’ (a fertilizer based explosive invented by the IRA). He teaches ‘explosives’ so he is probably correct.

Fifteen minutes later, my daughter came in. Her friend, the children’s mother, was a bit frantic. I was cooking dinner at the time (I do the cooking on Shabbat; it gives Y, my wife, a rest), so I managed to stretch the meal for us all.

“Which child does a mother grab?” my daughter asked. This was their first time in Sderot; they are normally in Beersheva where they get more warning, and they were surprised how quickly things happen here.

As I write we have another “Sever Adom”. It is about twenty seconds and nothing is heard so that one ‘missed’….

I suppose we are in for a night of it: the retaliations can be very noisy, too.

Later the ‘Mum’ had calmed down a bit. I had fed my (grown-up) brood the dinner that they missed. My second son had phoned in from Beersheva; they had seen the news. So daughter and son went out again; life goes on….

What is difficult to understand is why the world sees targeting of the civilian population as acceptable. They even finance it by giving financial aid to the PA, who pass it on to Hamas. Is it because we are only Jews in a small city far away? Or is it because to take action against Hamas is to have to admit to an agenda which finds Jihad acceptable, acceptable in New York, Boston, London, Mumbai, Madrid, Pattani (Thailand) , Xinjiang and Sderot.

As I am sitting here at my computer writing, it is now Gaza’s turn for the fireworks. It will be a retaliation that only strikes Hamas’ terrorist targets, but I feel for those whose lives are wrecked because they have to live under the cruel tyranny of such a vicious terrorist organisation, an organization which will keep the people hungry whilst they launch missiles at Israel at $1000 a shot.

Hamas wants a genocide of ALL Jews everywhere, but especially in Israel. Yet to the BBC and like organisations they are not terrorists, but ‘militants’.

Militants? Pull the other one!