This is the latest in a series of monthly reports by our British correspondent JP on the progress of worldwide Islamization, as represented by the building of mosques, and activities associated with mosques.

This is the tale of Avondale Islamic Centre. It’s like the Mosque on the Prairie, except it’s in New Zealand, and it’s a real mosque so everyone is trying to kill each other.

See the New Zealand section for details of the holy war launched by a firebrand Salafist imam and his followers on other Muslims, private security guards, and New Zealand Herald reporters covering the story.

Finally, some commentators at recent online discussions about the British Islamic schools Trojan Horse plot provided links to the Channel 4 documentary Undercover Mosque, first aired on 15 January 2007 — a link is repeated here in the end notes.

One of the founding members of the Clinton Islamic Center, Dr. Anis Ansari, elected president for the fourth time in the past twelve years.

Bridgewater residents jeered and disputed traffic expert testimony that suggested the proposed Al Falah Center mosque development would not have a negative impact on local traffic. The next planning board meeting at the Bridgewater-Raritan High School is scheduled for 30 June.

Report on plans by the Islamic Society of Central New York to build a $1 million mosque-community center on land it owns on East Seneca Turnpike in the town of Onondaga. “Our numbers are growing — we need more space,” said society President Mohamed Khater.

A federal appeals court ruled that a Christian police captain from Tulsa was rightfully punished for refusing to enter a mosque for a police appreciation ceremony.

The Islamic Center of Columbia, also known as Masjid al-Muslimiin, held a ‘Share Islam Day’ for those interested in the area’s diverse spirituality.

Senior Judge Paul Summers of Davidson County appointed to hear a case over a county-approved cemetery at the Islamic Center of Murfreesboro after all other judges in Rutherford County recused themselves from the matter.

More than five hundred Muslims in Prague held Friday Prayers in an open space near the Interior Ministry to protest police raids of Islamic Foundation premises in the city.

The Basque region’s first mosque inaugurated in the city of Bayonne. The mosque cost some 700,000 Euros, features a tall minaret and can accommodate three hundred people.

Sveinbjörg Birna Sveinbjörnsdóttir, first on the Progressive Party’s list in Reykjavík for municipal elections, voiced her opposition to a proposed mosque in Reykjavík. Iceland’s foreign minister, however, said that her remarks were not in line with party policy.

The Heritage Office at the Spanish Finance Ministry ruled that the Bishopric of Córdoba did not “usurp” Mezquita Cathedral and that it was the only registered owner of the property.

A group of twenty-five cyclists from the Ahmadiyya Muslim Youth Association set off on a 600-mile cycling challenge Ride4Peace to visit thirteen mosques between Glasgow and London. Money raised to be donated to the British Heart Foundation and international aid agency Humanity First.

Paul Wilkinson examines phases in the Islamisation of an English town, choosing Whitley Bay, Dudley, and Bradford as his examples. Mosques feature from the small Whitley Bay Islamic Cultural Centre and Masjid to the enormous 8,000-capacity Al-Jamia Suffa-Tul-Islam Grand Mosque in Bradford.

The BNP demonstrated against speculative pre-application mosque plans in Hemel Hempstead. Unite Against Fascism as well as members of the local Muslim community opposed the protest.

Raza Jamia Masjid and Islamic Centre, Accrington applied for planning permission to build a new mosque for eight hundred and fifty worshippers as its existing base had reached capacity.

Bolton councillors unanimously approved plans for a ‘landmark’ mosque to replace the existing Sughra Mosque in Farnworth. BNP subsequently held two protests against the plans in front of Bolton’s town hall, including an appearance by Nick Griffin on 17 May.

Report on an email sent by a UKIP candidate to Brent Council about the unauthorised use of a corner shop as a mosque. See also Kilburn Times.

Shirley branch of the Ahmadiyya Muslim Community considered New Addington as base for a new mosque.

Newham residents voiced concerns after Conservative Party election leaflets surfaced featuring a prominent image of a mosque as well as the promise to “help facilitate and cater for the needs of the Muslim community.” Reports also at Archbishop Cranmer, conservativehome, Daily Express, and Newham Recorder. 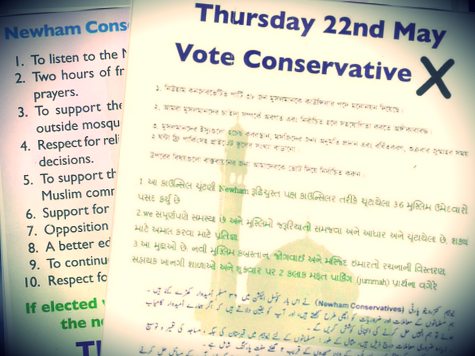 The long-running saga of the Undead West Ham mega mosque continued when it won a reprieve from the threat of council eviction. A public inquiry will take place during June, and will give Communities Secretary Eric Pickles the final say on plans by Anjuman-E-Islahul-Muslimeen Trust to develop a 9,000 capacity mosque at the Abbey Mills Riverine Centre. See also reports at Gates of Vienna: 30 November 2007, 23 May 2011, 5 October 2012.

Tower Hamlets council launched its Quit Tobacco Before Ramadan campaign with advice centres to be set up at mosques and libraries across the borough.

Doncaster Council approved a car park proposal submitted by Hyde Park’s Jamal Mosque. The thirty-five spaces will be for the sole use of mosque attendees.

Cabinet Minister Baroness Warsi visited Ghausia Lamia Mosque in Lye, Dudley where she addressed the audience in Urdu. One Lye resident was disappointed as he could not understand what she was saying.

Dudley Muslim Association won a second chance to appeal against a decision earlier this year favouring Dudley Council’s legal bid to reclaim land earmarked for a controversial multi-million pound mosque development. Judge Sir Stephen Sedley ruled there was an ‘arguable’ case that Dudley Council may have committed an ‘abuse of power’ over its dealings with the association.

Wolverhampton City Islamic Centre and Al Rahman Mosque granted formal permission for change of use of the former Gala Casino which it has occupied since June 2013 as a mosque.

Bradford West MP George Galloway urged the Muslim community not to react to mosque visits by Britain First activists. Report also at the Yorkshire Post. Consequently, Bradford Central Mosque issued an open invitation to those wishing to satisfy their curiosity about the building and the faith. A separate initiative involved discussions between Communities Secretary Eric Pickles and mosque leaders.

The Minister of Endowments announced new regulations forbidding mosques to serve as venues for electoral campaigns.

Israel and the Palestinians

At an Islamic conference in Milan, an Al-Aqsa Mosque imam said that Arab armies would liberate a number of cities in Israel including Haifa and Jaffa. In other news, Pope Francis visited the aforementioned mosque where he met with the Grand Mufti of Jerusalem, and urged Muslims, Christians and Jews to “work together for justice and peace.”

At least seventeen people killed when a suicide bomber blew himself in a central Baghdad Shia mosque as members of the congregation entered for midday prayers.

Report on the murder of a Bangalore resident who opposed the construction of a mosque.

Report on a Grade III-listed building in Mumbai that has similarities to New Orleans-style architecture and features a small mosque on the ground floor.

Mumtaz Qadri Mosque, Islamabad, built in honour of and named after the killer of a politician who called for reform of blasphemy laws reported to be so popular it is raising funds to double its capacity.

A suicide bomber blew himself up inside a Peshawar mosque killing three and wounding eight others.

Muslim protester killed after residents and workers for a logging company fought over access to a mosque in Zamboanga City.

Three thousand people attended the opening of Blacktown Mosque in Sydney’s western suburbs. Sharif Amin of the Afghan Association of New South Wales said he hoped that the mosque would be able to reach out to the troubled young people in the Blacktown area.

City of Greater Bendigo Whipstick ward held a meeting where opponents of a $3 million mosque proposal aired their concerns.

Islamic factions fought for control of the Avondale Islamic Centre in Auckland, and it was subsequently shut down indefinitely by the New Zealand Muslim Association after security guards were threatened with holy war and assaulted by followers of a Salafist imam. In addition, an administrator at the centre was severely beaten, hospitalised for ten days and went into hiding. Reporters at the New Zealand Herald covering the story were also threatened with violence. The imam at the centre of this mosque ruckus named as Mohamed Abu Hamam — according to a 2010 US cable released by Wikileaks, Hamam was known as an Afghan war veteran and under New Zealand police surveillance. In further developments, the imam’s right-hand man was charged with threatening to kill.

See also Daniel Greenfield on this case: “To Actually Put a Jihad on a New Zealand Citizen Trying to Enforce New Zealand Law is Ludicrous.” Frontpage Magazine, 21 May 2014

“First you have a mosque. Then the mosque has a border. Then there are Muslims invading the mosque border. And then you’ve got the Syrian Civil War in New Zealand.”

The Islamic Centre for Woman and Children in collaboration with the Muhammed Yadalieu English Arabic School held its seventeenth annual conference. The theme was the five pillars of Islam.

The Sultan of Sokoto and President-General of the Nigerian Supreme Council for Islamic Affairs, Alhaji Muhammad Sa’ad Abubakar III, opened a week-long Islamic book exhibition at the National Mosque in Abuja. The exhibition’s theme was “Uthman Dan Fodio — Our Heritage of Knowledge and Moral Reform.”