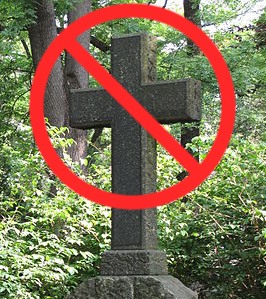 The following translation from Unzensuriert.at was originally published at Vlad Tepes in a slightly different form. Many thanks to Oz-Rita for the translation:

During Muslim burials, crosses must be hidden

Massive clashes between different cultures are a near-daily occurrence in Germany as well as in Austria. However, conflicts between Christians and Muslims cause increasing anger among the citizens, and for quite a while they [Muslims] have unwilling to accept just about anything. Recently there was such a case in the German town of Offenbach near Frankfurt on the Main. After an agreement had been reached between the two cultures, the Muslims demanded still more and more.

Dying is no-one’s favorite subject, except in the following case: A Muslim community had asked for a special place in the cemetery in the Hessian town, Seligenstadt on the Main. So far so good. Such a place had been found for them. But now the (Muslim) community demands that all Christian symbols be removed from the entire cemetery grounds during a (Muslim) burial.

It had taken extensive negotiations to allow the Muslims their own ceremony. In this part of the cemetery, no coffins are to be put into the ground, but the corpses are to be wrapped in cloth, and laid out pointing towards East, i.e. Mecca. During this procedure, while Suras from the Koran will be read out, all crosses in the mourning hall are to be taken down or hidden away. These demands are made by Bashir Kumcu from the Ahmadiyya Community, with the explanation: “We are also making adjustments by following the rules of the cemetery administration.”

Nobody from this German town was willing to comment. However, the tones one can hear from the town hall are clearer: “The Muslims can hold their funeral ceremonies somewhere else, where there are no crosses”.

9 thoughts on “Away With Those Infidel Crosses!”