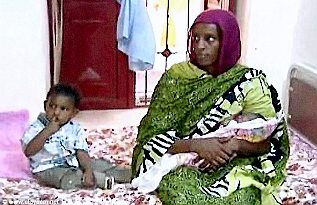 When the story appeared in Drudge, a gloomy cloud of inevitability closed in. The release of Dr. Meriam Yahya Ibrahim was a trick; they’re never going to let this woman go. With a whole country to run, with what should be an intense struggle to bring their people to a third-world level of prosperity, these 7th-century barbarians can’t let her go.

The top priority appears to be making sure their forty or so security thugs surround this woman and her babies at the airport to prevent her from leaving their fly-bitten hellhole.

We subscribe to Phyllis Chesler’s emails — hers is a sure voice, and one worth listening to. Of late, she’s been by-lined on Breitbart, which is encouraging, even if her sad news isn’t:

Meriam Yahya Ibrahim, the Sudanese Christian woman whom an Appeal Court freed yesterday, has just been re-arrested at the airport trying to leave Khartoum. She is now in more danger than ever before.

A man, Al-Samani Al-Hadi, has come forward who claims to be her brother. Meriam denies that he is. Nevertheless, he is claiming that his Islamic family honor has been “tarnished,” that he seeks “retribution,” that “Christians (have) tarnished his Islamic family’s honor through the case.”

It seems that Ibrahim’s presumed family, perhaps only her father’s side (a father who abandoned Meriam and her Christian mother when Meriam was very young), may have been the ones who initially filed a criminal complaint claiming they were “shocked” when they discovered that Meriam had married a Christian.

As soon as she was let go, I wondered how she’d ever get out of that place safely. Turns out she won’t; they’ve found another despicable Islamic way to make her an apostate so they can kill her.

So what’s the reason for all this thuggery and taqiyya? Why, so they can label their death machine “HONOR” before they torture and kill a woman whose training and skills they need. But she’s a woman. EEYEW.

Read the rest of Phyllis’ report and get her links at Breitbart.

Why hasn’t our government cut any ties to ANY country which treats women like this?

Where are the lefty feminists when they could actually be useful for a change? Or are they among the demonstrators and we didn’t see them?

Why isn’t Oprah at the front of the line protesting what is happening to this woman of color?

Who cares about the World bloody Cup or whatever the latest “athletic” circus is called when real people are dying horribly?

25 thoughts on “Another One of Those Bloody Honor Killings? Who Cares? Change the Channel…”