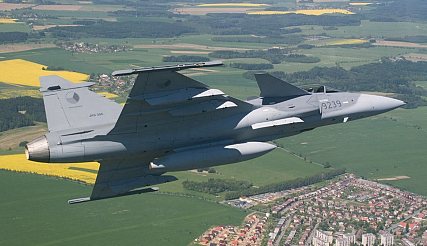 The following editorial from a Swiss newspaper discusses a referendum on the procurement of a fighter jet for the Swiss military. After it appeared, the measure was defeated at the polls.

JLH, who translated the piece, includes these observations:

I cannot help noticing the parallel to our own recent decision to dismantle our armed forces in the face of the opposite in Russia and China, to say nothing of Iran, and considering the evidence of our own gormless behavior vis-à-vis Ukraine.

It is also interesting that this one Swiss, at least, takes a Reaganite attitude toward his “peaceful” neighbors of the EU and prefers “trust but verify.”

The translated editorial from Die Weltwoche:

With no credible army, there is no independent Switzerland. Clever Federal Councilor Ueli-Maurer and his fortunately down-to-earth Army chief, André Blattmann are spot on.

Every country has an army — its own or a foreign one. Up to now there is no other idea that allows a sovereign territorial state to defend itself against aggressors. Every state that is and wants to remain independent needs an army. Every army has ground troops and an air force — and if necessary, warships. No regular army in the world does without fighter planes, which must be replaced from time to time. Thus, there is no reasonable ground for objection to the purchase of new machines of the type Gripen E in the referendum on May 18th.

For anyone who has forgotten or suppressed it, or not yet figured it out, the situation in Ukraine shows it clearly. Whoever has no real army is easy prey. He is neither respected nor taken seriously. He becomes the plaything of foreign interests. The function of an army is to frighten off the potential aggressor with the highest possible price of admission. Every country must at some time or another be able to defend its terrain and air space. The one who can secure order — or destroy it — will be sovereign. Without a strong army, there is no sovereign state.

Opponents of the Gripen argue that Switzerland is surrounded exclusively by friends. Such perceptions miss the essential point. They do not recognize the attacks on Swiss prosperity already in progress; the envy which engenders greed and aggression. They overlook the most basic thing: Any government is only as stable as the army it can call to its defense in an emergency. That is true in peacetime as well as in time of war. Do not bring a knife to a gunfight. Switzerland is only as strong and self-confident as its ability to stand up for itself in a military conflict. The military is the prerequisite for the very existence of this state.

The Swiss army has been systematically dismantled since the end of the Cold War. Representatives of the civil establishment have been just as bemused by the illusory likelihood of a prospective perpetual peace as have leftist utopians and proponents of eliminating the army. Switzerland should just surrender itself to the Nirvana of foreign military alliances. On the gravestone of the old Swiss army are the names of prominent civic assistants to the mercy killing: Kaspar Villiger (FDP), Adolf Ogi (SVP), Samuel Schmid (SVP).*

The way Switzerland is treated by other nations is also a product of its readiness to defend itself. On November 20, 1951, the National Security Council of the United States published a highly secret report. Under the file designation NSC 119, the Americans praised Switzerland as the country with the “greatest defensive capability in Europe.” Especially formidable was its determination to defend itself.

Naturally papers from the Cold War era cannot today be evaluated one-for-one. But the respectful tone remains impressive. A Switzerland prepared to defend itself was a fact and not some propaganda myth of “spiritual defense of country,” as maintained by today’s historians and politicians with equal parts of smugness and blindness to history.

To be sure, the significance of a superior army for a small, neutral state should not be decided on the impression it makes on others. It is also a question of dignity and credibility, whether a state that claims to be independent is prepared to bear the costs and effort of protecting its borders, its territory and its people in case of war.

Today, it is not about whether we buy a better or worse airplane. It is about Switzerland standing up for a credible national defense and therefore national independence. In recent decades, the Swiss army has been cut to the bone, and more. The air force still had over 300 machines at the beginning of the 1990s. At the autumn session of the National Council, the prevailing opinion was that Switzerland could not be defended with less than 400,000 troops. Today, advocates for the army are begging on bended knee for 100,000 and — perhaps — an air force of somewhat over 50 planes.

Federal Councilor Ueli Maurer has managed the feat of uniting his military leaders behind the Gripen, even though some insiders wanted a more expensive and allegedly better plane. It is clear from the latest “arena” debate on Swiss television that the defense minister is superior to his Green-Liberal opponents in both argumentation and trustworthiness. Switzerland needs an army. An army needs an air force. The old Tiger fighters — prototype dating from 1959 — must be replaced. In the opinion of the gratifyingly down-to-earth

chief of the army, André Blattmann, the Gripen E is a viable solution at a reasonable cost. Anyone who is for the army, and therefore for Switzerland, cannot ignore this simple logic on May 18th.

Final Note: The “peace Party” won the referendum on the grounds mentioned above — “surrounded by friends.”

10 thoughts on ““Without a Strong Army, There is no Sovereign State””