Sweden and the Cost of Mass Immigration
by Fjordman

In early 2014 Jan Tullberg, a researcher with a background from the Stockholm School of Economics, published a book about the impact mass immigration is having on Sweden. He estimated the costs of immigration to be around 250 billion Swedish kroner annually, roughly 7% of Sweden’s Gross Domestic Product (GDP) for 2013.

This is substantially higher than earlier estimates presented by professor Bo Södersten in 2003 of 40-50 billion kroner annually, and professor Jan Ekberg in 2009 of 45-60 billion kroner annually. The number of immigrants and their descendants keeps rising fast every year. However, Tullberg added certain indirect costs that were largely excluded from previous studies, such as increased crime and special education needs for immigrants. 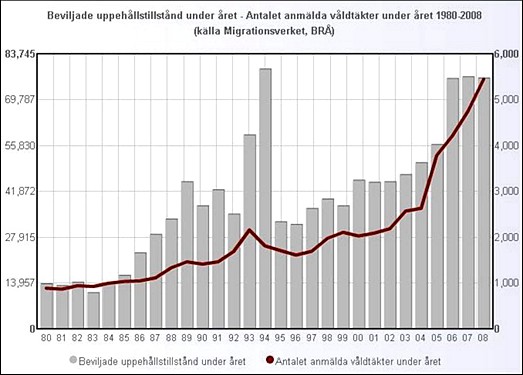 I cannot vouch for the accuracy of this number suggested by Jan Tullberg. However, if you divide 250 billion kroner by 9.7 million people, it amounts to nearly 26 thousand kroner per inhabitant per year. That’s nearly an average monthly wage in Sweden, before tax.

Yet this sum includes every single person living in Sweden, from babies to recent immigrants. The sum becomes even higher if you divide it by the number productive native citizens. If this is correct, it means that every native Swede starts his year by dedicating all of January to pay for a mass immigration that could render him a minority in his own country in a few decades. Only in February does he start earning money for himself. And these costs keep going up.

Predictably, Jan Tullberg’s book and its explosive content were met largely with silence from the established media, even though 2014 is a year of national elections in Sweden. This was also the case in 2013 when the ethnologist Karl-Olov Arnsberg and the journalist Gunnar Sandelin published their book Invandring och mörkläggning (“Immigration and Cover-up”), where they described sensitive facts about immigration. As the writer Elin Ørjasæter noted in Norway, the book by Arnsberg and Sandelin has sold thousands of copies, despite having met a near-total blackout from the heavily censored Swedish mainstream media.

The May 2013 riots in certain immigrant-dominated suburbs of Stockholm and other Swedish cities raised eyebrows abroad. While I found them disturbing, I cannot say that I was totally surprised by them. I had consistently warned about such a likely outcome under this pen name for nearly a decade.

A year later, there are still fears that similar riots could return at any moment. The underlying problems have not been resolved, and immigration continues at full speed. Other Swedish cities such as Gothenburg (Göteborg) and Malmö have been plagued by public gang shootings and the rise of foreign mafias on a scale that would have been unthinkable in Scandinavia just a few short years ago.

Some of this growing instability is threatening to spill across the border. Sweden’s diversity problems are gradually becoming a security threat to neighboring countries. There have been several documented cases where people from an immigrant background have traveled from Sweden to Norway to carry out crime there.

In 2012, a court found four Muslim men guilty of terrorism for planning an assault on the offices of the newspaper Jyllands-Posten in Copenhagen, Denmark. They were the Swedish citizens Munir Awad, Omar Abdalla Aboelazm and Sahbi Ben Mohamed Zalouti, plus one Tunisian national. These men were arrested in December 2010. Jyllands-Posten has been the intended target of several Islamic-inspired terror attacks since it published some rather innocent cartoons of Islam’s founder Mohammed in September 2005.

This particular plot to “kill as many people as possible” was uncovered and prevented through competent work by the security intelligence agency PET in Denmark together with its Swedish counterpart Säpo. However, there will probably be more such Islamic terror attempts in the future, and it is questionable whether the security services will be able to prevent all of them.

The business daily Finansavisen in Norway has concluded that immigration to Norway cost 210 billion Norwegian kroner under PM Jens Stoltenberg’s left-wing coalition government, between 2005 and 2013. This estimate may well be too low. In a series of carefully researched articles published in 2013, Finansavisen came to the conclusion that the non-Western immigrants who came to Norway in 2012 alone will cost the country 63 billion kroner, when all is said and done. On average, every single non-Western immigrant will cost native tax payers 4.1 million Norwegian kroner, with Somalis topping the list as the most costly nationality.

The only immigrants that were a net gain to the economy came from other Western countries, especially Western Europe and North America. Norway has for instance seen an influx of young Swedish nurses. These are culturally speaking closely-related peoples. It is far more difficult to assimilate Pakistanis, Kurds or Arabs.

The claim that non-Western immigration is beneficial to the economy is just plain wrong. Some big companies may gain short-term benefits from access to cheap labor, and left-wing political parties can import voters from Third World countries, who overwhelmingly tend to vote for left-wing parties. Yet for society as a whole in the long term, non-Western immigration is a net drain, not a net gain. Muslim immigration is a particular liability because it brings with it a whole set of additional problems not usually seen among Chinese or Thai immigrants.

These highly revealing numbers about the huge costs of mass immigration were barely talked about during the national election campaign in Norway in 2013. They were largely met with silence, usually by the very same journalists who claim that is no bias or censorship on subjects related to immigration. The reporters for the state broadcaster NRK were among the worst.

The costs are presumably higher in Sweden than in Norway since Sweden has accepted more non-Western immigrants that any other Nordic country. Moreover, unlike Norway, Sweden does not have substantial wealth derived from oil and natural gas. The large and growing costs related to mass immigration have already become a significant burden on society. The famous Swedish welfare state is no longer what it once was.

A study from 2014 revealed that eight of ten Swedes now believe they won’t get a pension that will cover their living expenses after retiring. At the same time, numbers from early 2014 indicated that Sweden is in the middle of its largest population increase in generations. Most of this is due to immigration from countries such as Somalia and Syria.

Native Swedes are running out of money, partly because this have to fund their own colonization. They will be a minority in their own country in a few decades, if present trends continue, and they are paying lots of money to finance this population replacement. The same could be said about other European countries, from The Netherlands or Germany to Britain.

The costs of mass immigration take different forms, direct and indirect. Those that are simplest to measure in monetary terms are social benefits and welfare payments. These have been demonstrated time and again in different studies from different Western countries to be very substantial.

A decline in social trust is another effect. This is harder to measure, but likely to be significant. The Scandinavian and Nordic countries owe parts of their wealth to high levels of social capital, for instance high levels of trust and low levels of corruption. This is a cultural achievement supported by a largely homogeneous populace with shared values. This great reservoir of social capital is now being willfully and systematically squandered by current immigration policies. By rendering the population less homogeneous and mass importing people from more cynical and repressive clannish cultures, you lower levels of trust and increase corruption.

Another type of cost is the rise of organized and violent crime. Many people now feel less safe in the streets, which is a serious negative consequence of open borders policies.

Last, but not least, comes the highest price of all: The loss of homeland. While spending billions needlessly on social benefits for foreigners may be annoying, you cannot put a price tag on being displaced in your own country by other nations and seeing your cultural heritage being disparaged and dismantled.

These negative effects are now being felt by the natives from Greece to Ireland and from Finland to France.

Former US President Dwight D. Eisenhower made a famous speech in 1961 where he warned against the military-industrial complex. If you put together all those who are today engaged in feeding, sheltering and settling asylum seekers and other newcomers, we are dealing with a sizable industry of people, from interpreters to lawyers. Perhaps we can call this the asylum-industrial complex or the immigration-industrial complex. Huge resources are spent on keeping up an ideology and an immigration policy that could ultimately render the native population a minority in their own country. This is currently taking place not just in one country, but in dozens of countries across an entire continent: Europe.

It will be left to future historians to determine how such a massive and dangerous social experiment on hundreds of millions of people could be presented as something good and inevitable, and how the gradual destruction of the most creative civilization in human history could be lauded as a positive achievement.

33 thoughts on “Sweden and the Cost of Mass Immigration”