Our Israeli correspondent MC encroaches on my own turf to discuss the end of the importation of slaves into Virginia, and also what happened at the Bundy Ranch in Nevada last month. 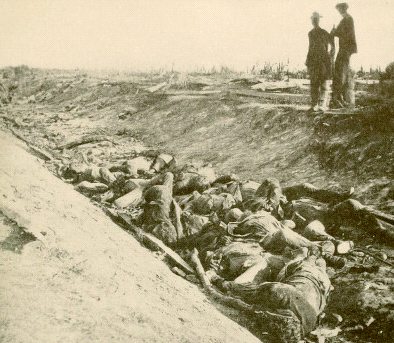 Nothing much
by MC

What do Miller’s Cornfield and the Sunken Road have to do with Counterjihad? Nothing much.

What is very relevant is why Lee’s Confederate Army was in the Union State of Maryland; Maybe because Jefferson Davis wanted a Confederate victory on Union territory to pave the way for the recognition of the Confederacy by Britain and France, a recognition that never came?

As usual, the issues at stake are obfuscated by a history written by the winners that does not quite fit the actual evidence.

The importation of slaves into Virginia was made illegal by Patrick Henry in 1778, a petition by the House of Burgesses having been rejected in 1772 by King George:

“Resolved, that an humble address be prepared to be presented to his Majesty, to express the high opinion we entertain of his benevolent intentions towards his subjects in the colonies, and that we are thereby induced to ask his paternal assistance in averting a calamity of a most alarming nature; that the importation of negroes from Africa has long been considered as, a trade of great inhumanity, and under its present encouragement may endanger the existence of his American dominions; that self-preservation, therefore, urges us to implore him to remove all restraints on his Governors from passing acts of Assembly which are intended to check this pernicious commerce”.

One can only be astounded by the prescience of the good burghers of Williamsburg. Could they see into the future? Could they understand the racial melee that would result from slavery? The inability of the 21st century Virginia to reject Islam because of the disgraceful but undeserved stigmas of ‘slavery’ and ‘racism’?

It is significant that King George rejected this 1772 petition. He was making an awful lot of money through the transportation of slaves, the truth of history is that the State of Virginia was the first legislature in the world to ban the importation of slaves. And within two years of its independence, when it surely had other pressing matters to legislate, which only emphasises the importance with which the average Virginian wanted to be rid of slavery and the forced importation into their state of an alien sub-culture.

In fact, the Atlantic slave trade was a New England thing. Notes on the History of Slavery in Massachusetts (1866) by George Henry Moore says:

“A subsequent entry in Winthrop’s Journal gives us another glimpse of the subject, Feb. 26, 1638.

“Mr. Peirce, in the Salem ship, the Desire, returned from the West Indies after seven months. He had been at Providence, and brought some cotton, and tobacco, and negroes, etc., from thence, and salt from Tertugos;” Winthrop, 1., 254. He adds to this account that “Dry fish and strong liquors are the only commodities for those parts. He met there two men-of-war, set forth by the lords, etc., of Providence with letters of mart, who had taken divers prizes from the Spaniard and many negroes.” Long afterwards Dr. Belknap said of the slave-trade, that the rum distilled in Massachusetts was “the mainspring of this traffick.” M. H. S. Coll., i., iv., 197.”

So in 1638 New England was shipping slaves, and Yankee Traders were common on the African coast for the next two centuries.

The sainted Northern States did not liberate one slave whilst they were actually under ownership; ‘liberation’ was always for the as yet unborn, and even then only at some future arbitrary date. All through the early 19th century, New Englanders would avoid financial loss by taking their slaves South to sell them on before their date of liberation made them valueless in the North.

But then the North did not need slaves from Africa, there were plenty of ‘white slaves’ coming over from Europe, ready to pay for passage with seven (or more) years of unpaid ‘indentured’ hard labour. Slavery by another name.

So the State of Virginia is fighting an unwanted slavery forced on them by the British Monarchy and facilitated by New England traders. Is this what we are taught in school? Is this why we are scared to challenge CAIR and must be called ‘racists’, because our forefathers resisted and banned slavery?

Robert E. Lee was at Antietam/Sharpsburg on the 17 September1862 where, as a native Virginian, he commanded the Army of Northern Virginia. This was perhaps the first day of modern warfare, and some 23,000 young Americans paid a price. But what did they pay for?

It was nothing to do with slavery.

The terror of fighting in Miller’s Cornfield must have been intense, and the slaughter in the Sunken Road once it was outflanked; horrific.

The Virginian boys were fighting for ‘freedom’ for the State of Virginia and other states. Federal encroachment had reached a point where it had become intolerable; the U.S. Army had been used to occupy Fort Sumter against the will of the State of South Carolina.

Switch the scene to Bunkerville in the State of Nevada, to the Last Ranch left in the county, where armed federal forces have attempted to stage a paramilitary coup every bit like the Fort Sumter incident.

These federal forces that promote the gross lies of ‘Anthropogenic Global Warming’ and Agenda 21, forces who trample on States Rights and the First and Second Amendments to protect tortoises from the ‘vicious’ hooves of ruminating cattle. Forces that are willing to destroy the Bundy Ranch in order to make a buck or two for corrupt politicians and their cronies. Forces who tasered a pregnant woman (I wonder what the unborn infant felt).

Those Federal Officers should be named and shamed. They have taken an oath to uphold the Constitution and they had the right to refuse to be pawns in a dishonest enterprise.

They are Oath Breakers; they are shamed. They are not worthy to even shine the boots (if they had any left) of those young men who died amongst the corn stalks or in the ditch, raked by balls of lead (see the photo at the top of this post).

The sources for the slavery material are on this website.

Beware of the anti-Catholic/anti-Jesuit Propaganda, I quite like his research even if I am not happy with his blanket “Vatican diddit” theology.

23 thoughts on “Nothing Much”