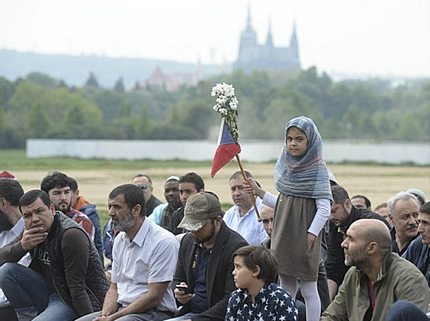 Our Slovak correspondent Gemini sends a brief summary of this interesting news item from next door in the Czech Republic. The story concerns an, ahem, insensitive incident that occurred before culturally enriched public prayers in Prague. Gemini says the article in metro.cz includes information not reported by the foreign media:

Around 300 Muslims gathered today in Letná Plain [Letenská pláň, an open public space close to Prague Castle] for a prayer to protest against the late police raid on Islamic locations in Prague. According to them the raid was unnecessarily harsh. The Indonesian embassy complained about it.

A report was made public (on a Facebook page called Islám v České republice nechceme) that the place chosen for the prayer had been polluted by their opponents with pig’s urine the night before.

Czech Christian leaders were unhappy with last week’s police raid on the Islamic center and other locations in Prague. Below is an article from Fox News that makes no mention of pig’s urine (hat tip Fjordman):

Czech churches are backing local Muslims who have been complaining about police raids in Islamic centers during prayers.

The two raids took place April 25 in Prague as police arrested a 55-year-old Czech and charged him with racism for publishing an Islamic book that police alleged spreads racism, anti-Semitism, xenophobia and violence against “inferior races.”

An Indonesian diplomat was among the 20 detained, prompting its embassy to complain.

Joel Ruml, deputy head of the Ecumenical Council of Churches, an umbrella organization of Christian churches, said Friday that the raids “seriously violated” the rights of believers and police should apologize for them. Catholic priest Tomas Halik called the raids “a sin” on a local website.

Hundreds of Muslims were praying Friday near the Interior Ministry building in Prague to protest.

14 thoughts on “Islam Not Wanted in the Czech Republic”