Our British correspondent JP reports that the Dog Jihad has surfaced again in a culturally enriched part of London. But was it really the work of Muslims, or a false flag operation mounted by Islamophobes? I’ll give my own (amateur) opinion at the end of this post. 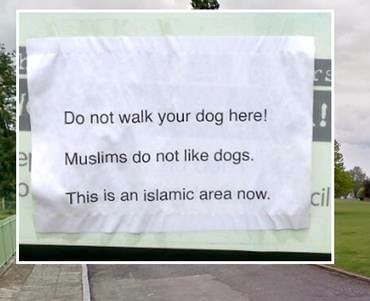 Readers may remember a couple of dog stories earlier this year — and it is not surprising to find another one surface in London today. Perhaps a sign of the Islamic community’s increasing confidence in doing and saying more or less what it likes while a nervous political class reeling from recent elections wonders what to do about the whole sorry mess? Or is it, as the Labour MP Jim Fitzpatrick questions, the work of agent provocateurs?

A difficult one to call and probably irrelevant, given the febrile atmosphere in the UK with a Muslim community and its leaders on the offensive on multiple fronts while at the same time claiming victim status as a result of what they perceive as witch-hunts whether in regard to Islamic school plots or dubious electoral practices in Tower Hamlets. Add to this a feeling among the wider community of fast-approaching toleration saturation with so little to show for it that probably now is as good a time as any to come to long overdue resipiscence.

Excerpts from an article on the topic published in The Standard:

Police were today investigating a sign telling pet owners to stay out of an east London park because “Muslims do not like dogs”.

The warning, in Bartlett Park, Poplar, said: “Do not walk your dog here! Muslims do not like dogs. This is an Islamic area now.” It was today branded “unacceptable” and “provocative” by an MP who called in police after being alerted to the sign by a concerned dog walker.

Labour’s Jim Fitzpatrick called on police to find out if it was put up by “religious zealots” or a far-right group such as the English Defence League (EDL). “The question is whether it was put up to be provocative or by religious zealots to be racist,” the Poplar and Limehouse MP told the Standard.

Afterword by the Baron:

Vlad and I discussed this incident earlier this evening, and both of us are certain that it was a false flag operation by disgusted “persons of English background”.

If Muslims had done it, the word “Islamic” would have been capitalized. Besides, they would have really hammed it up (so to speak), like the “Shariah-Controlled Zone” posters — slick graphics and over-the-top rhetoric.

And there would be nothing about “Muslims”. That’s not the way they would word it. “Allah has forbidden them to you” would be more the flavor of it.

And the text would have cited sura and verse. For example:

Do not take the hounds and pooches as your friends, for Allah has deemed them to be unclean. — Qur’an 17:113*