In the following video Dr. Bill Warner expands on his basic thesis that anti-sharia activists must move out of the talking phase, and into the action phase. In particular, he focuses on the idea of demonstrations against the persecution of Christians, citing two such events that will occur next weekend in Texas and Florida.

Many thanks to Vlad Tepes for uploading this clip:

I don’t have any further details on the Texas event. However, additional information about next Saturday’s Prayer March for Persecuted Christians in Orlando is below the jump:

The march will begin at 6:30 PM, East end of Lake Eola Park, at the Forum opposite Panera Bread [“S” on map], proceeding along the South end of Lake Eola, Northward on Rosalind, concluding with a prayer rally at Trinity Lutheran Church, 123 E. Livingston Street [“F” on map]. 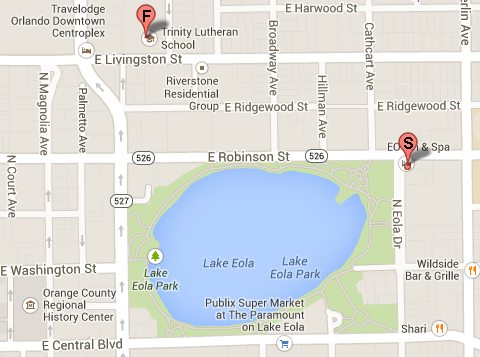 8 PM, at Trinity Lutheran Church, we will have International speakers from Europe, Egypt, Syria, and Pakistan sharing their personal accounts of Christian persecution.

A 2014 Pew Study reports, Christians are the most persecuted group in the world. In 2013, a Vatican spokesman reported 100,000 Christians are murdered each year.

Churches are regularly burned in Nigeria, Egypt, Syria, Pakistan, Indonesia, and Iraq. Christian pastors have been jailed and beheaded.

Our Prayer March is not political, but rather an appeal to God and humanity to stop the desecration of human life.

Churches and other interested organizations are invited to participate.

Signage and candles will be provided by Burning Bush Ministries who is sponsoring this event.

It is time for Christians of all sects, and all people of conscience, to speak up for Christians being violently persecuted in North Korea, Middle East, North Africa, and anywhere else this violence is taking place.

The Prayer March For Persecuted Christians is a Clarion call for the Clergy in the United States to speak out for the voiceless.

Join us on May 17 in Orlando, FL to give voice to the voiceless.

One thought on “Bill Warner: Why Demonstrations?”