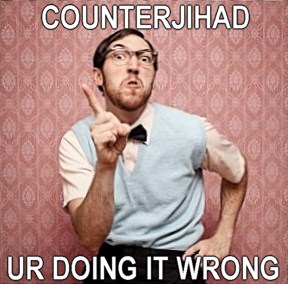 A couple of days ago a reader left the following complaint as a lengthy comment. It was off-topic and inappropriate for the post where it was submitted, so I never approved it.

Despite its abrasive and antagonistic tone, this comment raises issues that are worth discussing:

NOTE: I object to the tone of the following remarks, but I am reproducing the text here as-is so that the writer’s concerns may be brought to the attention of our readers. I expect any responses in the comments to adhere to a better standard of civility and decorum. One may discuss the pros and cons of these issues without resorting to this level of invective:

Did you ever consider that the reason why the Counter-Jihad is floundering so badly is because of CONSERVATIVES like you?

I’m a (mostly) LIBERAL Counter-Jihadist and I get to see this ugly (and stupid) right wing crap every day while I read through the stories linked to TROP. I get to see a valid story about creeping islam followed by the most ridiculous tripe right from the butts of the Koch Brothers and Rupert Murdoch on sites like Front Page and American Thinker.

If I didn’t know the true nature of islam I would look at the articles on sites like those and immediately assume that the truth is the OPPOSITE of whatever they say. For a long time, if I didn’t know which way to vote on an issue I would just look up Machelle [sic] Bachman’s [sic] position and then vote the EXACT opposite. When I realized that she was also a Counter-Jihadist my head almost exploded. I spent a couple months reading the quran, sirah, and hadith just to MAKE SURE what I believed about islam is true (it is).

It’s also pretty obvious that the Counter-Jihad is being funded and pushed by a few front organizations that are rabidly pro Israel and pro Christian. Even though EVERYTHING they say about islam is 100% true, a lot of people who don’t care about Israel, and actively HATE Christians, are turned off by those links and agendas.

How many times have I read about the evils of islam from Raymond Ibrahim only to click the next article about the evils of abortion? Does he ever consider that some of us are ABSOLUTELY PRO CHOICE? It never even registers to Ibrahim that taking away a woman’s CHOICE makes her EXACTLY like a muslim woman.

I laugh when I read these right wing sites when they talk about ‘Christians under seige [sic]’ in America. I’ve learned the hard way NOT to drink while reading these inverse reality gems lest I shoot liquid out my nose. There are 50 to 100 MILLION Christians in America and EVERY chance they get they try to ram their agenda down the rest of our throats, EXACTLY LIKE MUSLIMS DO. Weather[sic] it’s closing abortion clinics, forcing women to have degrading VAGINAL ultrasounds, putting the ten commandments on PUBLIC land, teaching creationism in schools, or making all our TV shows only fit to be watched by 6 year olds. Christians are not under siege in America. America is under siege by Christians.

Even liberals who KNOW that islam is evil have to weigh weather[sic] they want to oppose something that is mostly confined to the other side of the earth (for Americans) or the very REAL threat from Christo-Fascists-Dominionists that currently infest every branch of the gerrymandered ultra insane Republican party. Even pro business libertarian Republicans have noted, with dismay, the infiltration by the ‘Christo-Crazy’.

As a mostly liberal I just read, wait, and watch you (and others) spin your wheels in futility (mostly self inflicted). I know in my heart that the CJ will flounder uselessly UNTIL something big happens like Paris burning to the ground, or a city being nuked, or a REAL WMD attack in the west. When the liberals FINALLY take up the CJ cause they will pretend like you (and others) NEVER existed, and they will congratulate themselves on how righteous they are for standing up to ‘intolerant’ islam.

As you turn purple and stroke out from apoplexy in the background they will say with an absolutely straight face how they’ve ‘always’ been against intolerant islam and how it’s now ‘acceptable’ to hate muslims as much as we (liberals) hate Christians.

Have your blood pressure pills ready…

P.S. If you’re not getting some of that right wing / pro Israel money, perhaps you just need to put your hand out? The CAIR article about where SOME of the CJ money comes from was too nauseating left wing / pro islam (even for me) to finish. There’s nothing wrong with getting paid to do what you already doing (for free).

166 thoughts on “Some Sage Advice”