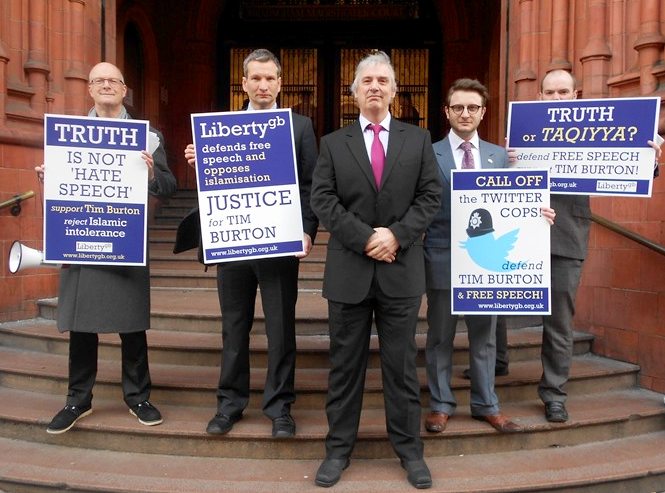 As discussed here earlier in the week, Tim Burton of LibertyGB was acquitted of a “hate speech” charge in Birmingham on Tuesday. Yesterday Mr. Burton published an account of his trial at The New English Review. Below are some excerpts:

Showdown in Birmingham
by Tim Burton

I took a last mouthful of cappuccino and glanced out of the window of the restaurant over the road from the Birmingham Magistrates’ Court. A small group of demonstrators had already arrived on the Court steps and were busy setting up placards and handing out leaflets to curious passers-by. It was time to go.

It was Tuesday 08 April, and the time was just after 09:00. I was scheduled to appear in Court 13 of the Court later that morning to answer a charge of Racially Aggravated Harassment — a charge which had been brought by the Crown Prosecution Service following my interview with West Midlands Police some four months earlier. A gentleman by the name of Fiyaz Mughal had complained that I was harassing him on Twitter by referring to him as a “Mendacious Grievance-Mongering Taqiyya-Artist” and a “Lying Muslim Scumbag” — words which I had indeed used in relation to the gentleman in question — and he had seen a chance to exact revenge by using the forces of law and order to do his dirty work for him.

A link to the case from Liberty GB is included here.

I walked across the street and introduced myself. The demonstrators with the placards and the leaflets (whom I already knew by reputation) were from Liberty GB, a political party for whom I was the Radio Officer, and there were also one or two familiar faces from other publications and political organisations that I had come to know and respect. I also recognised (from photographs in his many articles and books) Professor Hans Jansen, our expert defence witness, chatting on the courtroom steps with one or two people. The case had generated a lot of interest over the preceding four months, with the phrase “Mendacious Grievance-Mongering Taqiyya-Artist” going around the world like wildfire — a phenomenon which had generated its own cottage industry with commemorative coffee mugs and T-shirts, each emblazoned not only with the “Mendacious Grievance-Mongering Taqiyya-Artist” slogan but also with the distinctive features of Fiyaz Mughal himself. 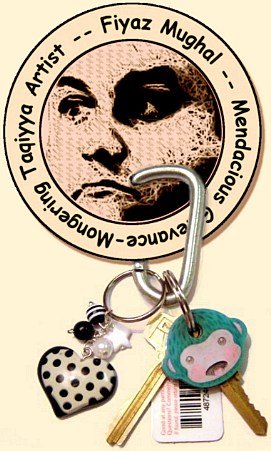 It was now 09:30 — time for me to present myself at the Court. I walked up the steps into the main building, an imposing edifice built in Victorian times and originally known as the Victoria Law Courts. As I walked through the door, past the security screening device, the two imposing gentlemen wielding metal detectors and the sign saying “No Knives Allowed”, I reflected on the many generations of people who had come here to answer similar charges and wondered if they had felt as I did — a feeling of awe at the magnificence of the surroundings combined with a certain trepidation at the prospect of facing serious jail time.

For make no mistake, the charge of Racially Aggravated Harassment is not one to be dismissed lightly. On conviction, the penalty may be up to £5000 and six months imprisonment. One might think that this is somewhat over-the-top for the heinous crime of calling a Mendacious Grievance-Mongering Taqiyya-Artist a — well, a Mendacious Grievance-Mongering Taqiyya-Artist — but apparently there is “A Lot Of This Going Around” according the Crown Prosecution Service, and they wanted to put a stop to it. Never mind that the right to free speech is one of our fundamental freedoms and the cornerstone of a free democracy — if it offends one of our protected minority species then it must be prosecuted to the full extent of the law — or so the current thinking goes today, influenced as it is by the twin evils of political correctness and multiculturalism.

Fiyaz Mughal was the first to give evidence. The officers in the undisclosed remote location asked Fiyaz Mughal what religion he was — to which he replied “Islamic — I’m a Muslim” and so he was sworn in on the Qu’ran. I did think about jumping to my feet and shouting “Objection, Your Honour — this book gives the plaintiff divine permission to lie under oath in a British Court of Law if it furthers the cause of Islam!” but as I had been advised by my defence lawyer not to do any such thing, under threat of being charged with contempt of court, I simply gritted my teeth and remained seated.

The Crown Prosecution lawyer led Fiyaz Mughal through his testimony, during which he stated that he had felt threatened, harassed, distressed, alarmed, upset, insulted and offended by my tweets. In addition his very identity and who he was as a Muslim had been viciously attacked — he had felt scared for the safety of himself and his family — who knows what Catstrangler101 might have done if he had turned up on his doorstep one day with a mad gleam in his eye and a blood-stained keyboard under his arm? I sighed inwardly. Oh, for heaven’s sake. Methinks the lady doth protest too much (to paraphrase Queen Gertrude in William Shakespeare’s Hamlet.)

Fiyaz Mughal was also asked about taqiyya. He said that it was a historical concept, used by Shia Muslims a thousand years ago to defend themselves from persecution. (He didn’t say that the persecution was from other Muslims.) He said that the concept of taqiyya was mainly used today by extremist far-right groups seeking to defame Islam and Muslims. (He didn’t say that taqiyya was a generally accepted licence for Muslims to routinely lie to non-Muslims about the nature of Islam.)

But then it was the turn of my defence lawyer. He fixed Fiyaz Mughal with a steely glance (as far as it is possible to fix someone with a steely glance over a video-link connection.) “I put it to you, Mr. Mughal, that far from feeling threatened, harassed, distressed, alarmed, upset, insulted and offended by my client’s tweets, you felt a sense of quiet satisfaction, didn’t you? You wanted and need those tweets to add to your online hate crime database, didn’t you? In fact if you didn’t get enough of such tweets, you would be hard pressed to justify your enormous public grant, wouldn’t you, Mr. Mughal? Isn’t that right?”

It wasn’t long before beads of sweat could be seen on Fiyaz Mughal’s brow — a phenomenon which was commented on by several people in the public gallery afterwards. It was generally agreed that my defence lawyer was doing a grand job of grilling Fiyaz Mughal, and I have to say that I concurred with that sentiment. My defence lawyer continued. “Do you know what the word — mendacious — actually means? Or the word — scumbag — do you know what that actually means?” “Of course I do, let’s move on to the next question!” “Well, Mr. Mughal, what does it mean?” “Next question!!”

At that point the judge intervened to explain to Fiyaz Mughal that he was obliged to answer the question. It subsequently transpired that Fiyaz Mughal had only a partial grasp of the subtle nuances of both words — to the extent that it made me wonder why he was offended in the first place.

After lunch, Fiyaz Mughal concluded his evidence and was then released by the Judge from giving any further evidence. That was the last we saw of him. Then it was my turn to give evidence and I was sworn in on the Bible in the witness stand. It’s an odd thing, but having completed the swearing-in, a sense of calm descended on me. It was as if I knew that I couldn’t lose.

Read the rest at The New English Review.

3 thoughts on “Showdown in Birmingham”