As regular readers know, Elisabeth Sabaditsch-Wolff is in the process of raising money for her defense fund in order to appeal her “hate speech” conviction to the European Court of Human Rights.

Although her fundraising post has gone off “sticky”, she still needs your help. If you want to see her achieve victory in Strasbourg, please visit her website and choose one of the donation options.

Elisabeth sent this note to thank all the generous people who have donated thus far:

I always like to say thanks. It means so much to me, simply because I enjoy acknowledging other people’s work. Even more so if people trust me enough to hand over some their hard-earned money to fight for what we hold most dear: our freedoms, especially our freedom of speech (including opinion and conscience). 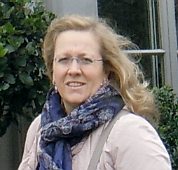 For the past five years I have been fighting a hate speech charge, one that was later turned into a “denigration of religious teachings” charge, and — not surprisingly — have lost all the way to the Austrian supreme court. I am sure most of you already know the details of the case, and even more of you have donated to my defense fund. Without these donations, I would not have been able to pay my exceptional lawyer, Dr. Michael Rami, who has been with me all the way to the supreme court and who has represented me — and us — so valiantly. Without your donations and your generosity, I would not have been able to continue this fight, the fight for the truth, the fight for our God-given right to criticize an ideology driven to eliminate any form of equality, dissent, and our way of life.

I cannot claim to know the outcome of the petition to the European Court for Human Rights. There is no way to know, although the chances appear more favorable than those presented to us in the Austrian court system. What I can promise is that I will never cease to fight for freedom of speech. I will never accept the verdict by the Austrian court system. It is wrong. It is unjust. And most of all, it is dangerous on so many levels.

Please continue your generous support. Not only with respect to the Save Free Speech Defense Fund, but also to Gates of Vienna and Vlad Tepes, as they have been and continue to be crucial to the success of this fight against the inroads of sharia law in our legal systems.

P.S. I also want to thank our translators JLH and Rembrandt Clancy, without whose diligent translations you would not be able to read the verdict in the English language.

JLH had this to say in the comments on Elisabeth’s fundraising post:

On of the most important things to know about Elisabeth is that she does not have to be doing what she is doing. When her lawyer demonstrated in their appearance at court in Vienna that he was capable of demolishing the charges brought against her, the court adjourned, twisted itself into a pretzel to produce another charge like a rabbit out of a hat, and convicted her of it, while refusing to hear proposed defense witnesses. Then it set a fine which was admittedly set low enough so she could afford it.

The purpose was not to administer justice, but to intimidate her, like those before her, into going away quietly, thankful not to receive a worse punishment. But, as one of her friends pointed out, it had the opposite effect—what I think of as the William Tell Effect. Tyranny meant to crush, when applied to the wrong subject, reveals an iron will. So Elisabeth has chosen to stand in the path of a tyranny that is rushing down the tracks in Austria and the rest of Western Europe, and in many ways and in many places in the US. And in the process, she is consuming enormous amounts of time and money.

She says she is doing this so that her daughter will not have to live under the shadow of Islam, which oppresses and brutalizes all of its subjects, but women and girls most of all. In fact, she is also doing it for anyone who believes in Free Speech.

As followers of GoV are aware, true democracy is the greatest enemy of both Islam and Western collectivism. When the might of the Habsburg Empire descended on William Tell—as told by Schiller and sung by Rossini—one man’s indignation was enough to start an avalanche of protest that made tiny Switzerland into one of the few bright spots in the political spectrum of Europe today. Elisabeth is not an archer, but she has taken aim at the heart of the Beast, and she is now going to the “court of last resort” which is in the bowels of the monster that is tightening its tentacles on the West. She deserves all the help she can get.

3 thoughts on “See You in Strasbourg!”