Our Dutch correspondent H. Numan sends this report on a recent culturally enriched event in a Dutch village that highlighted the reality that Geert Wilders has so often been excoriated for describing.

Reality is blond!
by H Numan

A few days ago I reported about what happened after the local elections in The Netherlands. A big stick was found to beat Wilders with, to divert attention from the massive losses suffered, most of all by the socialist party.

That circus is still going on. Not really a circus, more like church expressing an act of faith: mayors and aldermen walk solemnly in ceremonial procession to a police office so each can personally file an official complaint against Geert Wilders. Very much like publicly confessing sins by sacrificing a white bird (seagull) on the altar of politically correctness.

However, things are not going the way they hoped. Wilders doesn’t have to do a thing. Reality does it for him. The poor oppressed victimized Moroccans do everything they possibly can to show Wilders’ remarks were quiet, restrained, even polite, and above all 100% spot on. Read what even the staunchest multicultural believer cannot sweep under the rug.

Saturday a jewelry shop in the small village of Deurne was robbed at gunpoint by three suspects. Only it went wrong. The wife of the owner shot two robbers dead; the third one got away.

On Sunday the DA came to the conclusion this was a case (exceptionally rare in The Netherlands) of justified self-defense. The wife was, of course, still a suspect, but she is free until this case goes to court. In court she will not be the accused, but the victim. The gun she used was possibly an illegal weapon, so she will have to explain that to the court. But the act of using that gun itself was not, in his opinion, reason to keep her in custody.

As soon as I read the news about the robbery I noticed no clues whatsoever were given to the identity of the suspects. By law the family name of suspects cannot be printed, only the initials. Usually suspects are named by their first name followed by the initial. Volkert v.d. G, for example. To protect their privacy.

Since most criminals for whatever reason appear to be Muslim, and most often of Moroccan origin, that was changed by all media into vague terms. Yusuf H., Mohammed B., or Hassan Y. are too obvious. Almost invariably no clues are given at all. They are described as “citizens of”, “locals from”, “boys of”; that sort of vague terminology. Which is a dead giveaway that Muslims and most likely of Muslims Moroccan extraction are involved.

All the more so because the media assume people are really stupid. When a real Dutchman commits a crime they do write his first name plus initial. So, if you read “a robber from …” it’s almost certainly a Moroccan. If you read “the suspect Jan B. …” it’s a Dutchman. Easy.

On Sunday too many people inquired if the suspects were something else than Dutch Reformed juveniles skipping Sunday school. The DA gave away the identity of the first dead robber: he was Dutch Moroccan. On Tuesday the second one was identified: a real Moroccan. Illegally in the country. Both with a record of violent crimes. The third one is not yet identified and police are searching for him. Let’s guess. This chap is probably from Nunavut.

If the police can spare the time, because the above mentioned politically correct exorcism ceremonies do take up a lot of it. Time they could much better be issuing speeding tickets or fining pedestrians walking through red lights. Real important matters, in other words.

On Sunday evening they had to act on an illegal demonstration in Deurne, which supported…

No. NOT the wife of the jeweler. The (now dead) robbers. Moroccan inhabitants of Deurne expressed their support for the robbers. Together with some extreme left-wing juveniles, as not all of them (in photos) look North African. Not once, several times. On Sunday evening, and on Monday. A Moroccan mosque in Eindhoven held a memorial service for these poor oppressed boys and honored them. 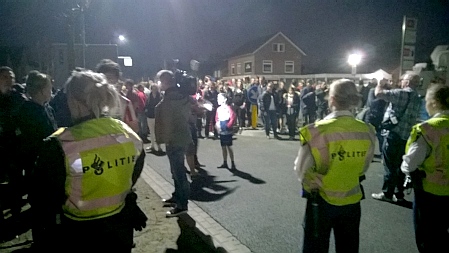 Mind you, Deurne is a small village. Not a big town. To gather so many people you need to invite them. Moroccans came from far away to support their fallen comrades in the struggle against the oppressing cheeses. (Moroccans call the Dutch ‘kazen’ or cheeses; vice versa Moroccans are called ‘macaques’. Only the latter is punishable by law.)

The CDA politician Ibrahim Wijbenga from Eindhoven (a convert) created this masterpiece of art to honor his fallen compatriots in the faith:

It’s getting weird now. Really weird. You probably know just about anything goes in The Netherlands. We used to have a labor union for drafted soldiers. We still have a small club fighting for the rights of pedophiles: Stichting Martijn. This club is under severe (but unsuccessful) legal pressure and (very successful) social pressure.

And we have something that trumps just about everything: a labor union for criminals! The Bond van Wetsovertreders (union for lawbreakers). I’m not making this up. This is a real organization dedicated to the welfare and working conditions of criminals.

This labor union expressed their support for the ‘victims’, and demanded that the DA arrest their ‘murderer’. They found the decision of the DA revolting, and said so. What they said (not so) indirectly is that they want better working conditions for robbers and muggers. It’s just a job like any other, after all. (Just like cannibalism is a matter of taste.)

At this moment the jeweler and his wife are under severe police protection as they receive multiple death threats, insults and acts of vandalism by Moroccan inhabitants of Deurne and far beyond. Those poor oppressed Moroccans see nothing wrong with robbing — as long as the victims are Dutch, that is.

I write about the most important item in the Dutch news. But there is so much more. A boy of fifteen was victim of an armed robbery in his own house on Monday. By … not by Eskimos. Another robber died after stealing a car and driving it in a canal. Yup. He wasn’t from Greenland either. Today a snack bar was robbed at gunpoint, one seriously wounded, one dead. By … Finnish boys perhaps?

Which brings us back to Geert Wilders. In just one week after his widely published remarks, reality bit multicultural correctness where it could. Wilders doesn’t have to say anything. Of course he does, but relatively speaking, not a lot.

The prime minister told children in the evening children’s journal they don’t have to worry. No Moroccans will be sent back; he will make sure of that. Wilders sent a tweet after the failed robbery to the prime minister: “Mark, are you going to comfort the children of jewelers now?”

The losses of the PVV is already receding. Even though the multicultural church is still in session exorcising their blond demon. Clearly their holy water isn’t working.

I’m pretty confident the PVV is back on track well before the European elections. And after that, they will be ready for national elections that will almost certain take place later this year.

Why? Because the current coalition support is sliced to nothing. They can only survive by the grace of the opposition. Which they have, as long as they can pay the price. Because in politics nothing comes for free. At the moment the government survives by the grace of D66, CU (left wing Calvinists) and SGP (right wing Calvinists) support. As long as it will last, that is. For that support they have to pay dearly. The CU and SGP, for example, demanded the official Day of the Sunday Sabbatical Law should not be changed, blasphemy against the gods must be re-included in the law, that sort of thing.

The PvdA (labor) party Tuesday pushed some legislation through parliament: from now on an illegal immigrant is no longer illegal. This issue was a key point for both parties: Labor promised to make illegal immigrants legal, the VVD to keep as it was, illegal is illegal.

In fact, for the VVD this promise was a cornerstone for their election. It was one of the points they could capture votes from what would otherwise be PVV voters. In exchange for their support the PvdA allowed some minor tax benefits the VVD hopes to satisfy their electorate.

Now, be honest: if you read all this, would you vote conservative in the coming elections? My crystal ball doesn’t work right now, but it seems to me Wilders can simply sit back and watch the show.

Almost the same as Obama’s last election. He didn’t have to do a thing. His opposition were a Mor(m)on, a greedy insincere financier and a homophobic Roman Catholic extremist. He simply couldn’t lose. That doesn’t mean to say America stood firmly behind Obama, just that it elected him for lack of anything better.

Until the elections last week, nearly every newspaper always said about the weekly polls: people, remember. These figures are virtual. The fact that the PVV is currently the biggest doesn’t say anything. We have only one poll, and that’s the national election. Were this a real election, results could be different. Now the newspapers are silent. Perhaps because reality seems to be blond.

16 thoughts on “Reality is Blond!”