Mark Steyn is always funny. But behind the wit is a dark truth: on the slippery slope where multiculturalists live and move and have their being, your facts are merely opinions. Their opinions — the multiculturalists’ ruling dogmas — are incontrovertible facts, they are the credos which every thinking sensitive, feeling person accepts as gospel truths and can recite by heart. They include the enthronement of worthy victims and the promulgation of chronic aggrievement as a constitutional right.

The Counterjihad is a subset within the larger pushback against the damage multiculturalism inflicts on the West in particular, though the damage proceeds apace in Third World primitive societies that buy into the ruling dogma for their own benefit. Especially do the despots who rule these places buy the benefits. Their unfree citizens? Not so much.

Thus we will continue to report on the depredations inflicted by the politically correct, multicultural fallacies that wreak such harm. These restrictions through which the Political Class attempts to eradicate our “ancient liberties” are impoverishing us all.

Let me amend that: our liberties aren’t ancient so much as they are inherent in the human condition, but all too often honored in the breach rather than the reality. The damage to the West’s cultural fabric by the Marxist/Islamic juggernaut has been grievous and unjust; no surer proof of that destruction is the ongoing disappearance of the middle class. Watch this amazing graphic to see the middle class vanish over decades in just one city (Chicago), which is now deeply in debt and floundering on the path to Detroit’s fate. Is it happening in Europe, too? I don’t know, but in America the pace of the ruination is increasing; that destruction is aided and abetted by Islam’s weapons of discord, divisiveness, and the push for an aggrieved victim class.

In the video, Mr. Steyn points out what one “tiny, miserable grey island in the North Atlantic” managed to accomplish. The great horror is the ways in which that hard-won knowledge is being buried beneath the strew and slander of the deliberate ignorance of those who want only its subjugation under a theocratic supremacy. Those currently in power chant a mantra about the ways “poverty breeds ignorance”, etc., while their own educated ignorance reduces all facts to mere opinion.

The latest strong-arming of those who dissent from their gospel? Numerous pronouncements are being issued by multiculturalists in the Anglosphere that climate “dissenters/deniers” should be jailed or otherwise silenced for their refusal to bow to the politically correct Truths proving that it is the dastardly behavior of human beings which is surely causing the earth to heat up to irrevocably dangerous levels.

Here’s a post noting the increasingly alarmist nature of the despotic desire to close the climate argument since ‘the consensus is decided’. More likely, ‘the fix is in’. Too much money — not to mention science reputations — has been shoveled into projects of dubious value for the investors to be able to let go easily.

That post is just one observation of the frantic chorus of “Silence Them” which is proliferating throughout the multicultural press and purported science departments in academia. You can do a search using a string similar to this: climate change deniers punishment. You’ll find a surprising number of countries ready to pounce.

A link to one such call for punishment, Crackdown ordered on climate-change sceptics led to a wall, a subscription firewall, which provided a snip and demanded that you pay a toll before proceeding. Sorry, but the London Times will get none of my RightWingExtremists lucre. Fortunately the snip of the news report they permitted you to see contained a link to the story about The Commons Science and Technology Committee. This CSTC appears to be an engine helping to drive this “crackdown”.

[An aside: Perhaps our British readers can tell me if the photo accompanying the firewalled news was some kind of code? The image showed an ancient, impeccably attired personage, one Lord Lawson, captioned as a “climate sceptic”. Is this meant to communicate to the reader that only the doddering upper upper classes — those with titles (inherited titles, one presumes) would be so disengaged from reality as to dissent from the gospel of the commoners? Please advise on the sub-text, if any.] 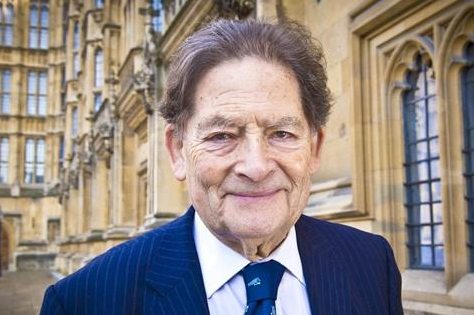 Here is the snip below Lord Lawson’s photo:

Ministers who question the majority view among scientists about climate change should “shut up” and instead repeat the Government line on the issue, according to MPs.

The BBC should also give less airtime to climate sceptics and its editors should seek special clearance to interview them, according to the Commons Science and Technology Committee. Andrew Miller, the committee’s Labour chairman, said that appearances on radio and television by climate sceptics such as Lord Lawson of Blaby, the former Chancellor of he Exchequer, should be accompanied by “health warnings”.

“Health warnings”? Do any of these fervent believers realize the contempt ordinary folk experience when they read one of these credos pasted prominently on yet another benign product?? We had occasion to pick up a new box of salt the other day and on the package was a prominent Big Bro warning to “use salt responsibly”…

Here is the pdf for that Science and Technology Committee’s views on climate change and public policy. Scrolling through the Table of Contents one gathers that the main concern is ignorant citizens who fail to follow obediently in the Henny Penny logic of the Committee’s proclamations. Their thesis appears to be that the only thing standing in the way of people’s comprehension of this dire situation is ignorance. The cure is more and better “communication”, ladled on in unremitting gobs. It’s akin to the old joke about the English matron traveling abroad and coming to a place where there were no English speakers. Her solution was to speak English loudly and slowly and repeatedly. This would eventually lead to “communication” with these ignorant folk. Obviously that method still prevails and has been heartily adopted by the Science Committee as the sure fire way to change hearts and minds.

That pdf from Parliament will someday be of historical interest — in the same way we look at scientific papers devoted to, say, luminiferous aether. Even though it has long since been discredited, the theory of aether was indeed an elegant ‘truth’ in its time.

26 thoughts on “Multiculturalism: “Cult of Ignorance””