Dr. Ashraf Ramelah of Voice of the Copts reports on the political and doctrinal ramifications of the traditional annual Easter pilgrimage to Jerusalem by Coptic Christians. 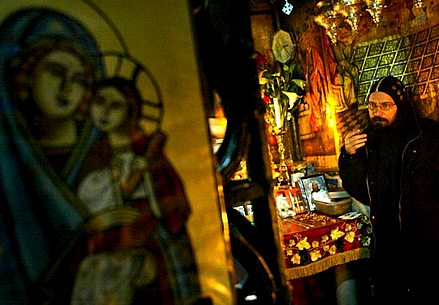 While Jews around the world celebrate Passover, Christians from Egypt visit the Holy Land for their week of Holy Pascha (the Passion of Christ). For this pilgrimage, Egyptian Christians (Orthodox, Catholic and Evangelic) leave Cairo by the thousands on daily flights to Jerusalem. Egypt’s airlines have increased departures to twelve flights per week from the normal four, delivering triple the visitors to Israel for the occasion — an expected annual spike in travelers. In spite of the regularity of this normal event, rumors vilifying Israel propagate throughout the Egyptian press.

On Sunday, April 13, one Arab news website, Elaph, alluded to an Israeli government ploy by reporting sources in Egypt’s travel industry worried that Israeli visas issued for Easter travel are really intended for another “mass” immigration of Copts to Israel. These fears stem from earlier waves of Christian emigration which increased during the Morsi era. However, now their cause for concern is based upon an approximate total of 10,000 Christian travelers — hardly a number to alarm the Islamic establishment.

It is doubtful that Egypt’s ruling class views as disagreeable a potential exodus of Copts. It is more likely to be encouraged, if not fostered, as in the evacuation of Jews from Egypt during the Nasser era. Currently, focusing on such “news” creates an opportunity to criticize and condemn imaginary offenses by Jews and the Israeli government.

Meanwhile, Orthodox Copts will deal with negative consequences upon return from Jerusalem. The Church hierarchy is irritated by the pilgrimages to Israel and stresses that Orthodox Christians are in violation of a 1978 edict issued by the late Pope Shenuda III forbidding visits to the Holy Land until Jerusalem is “liberated.”

In a political alignment with Arab-Muslims, the anti-Semitic edict disregards Christian doctrine connecting the history of today’s New Testament Church to the prophecies and promises of the Hebrew texts. The former Pope, departing from his true spiritual role to mix in politics, attached severe religious penalties for disobeying his edict, which has not yet been rescinded by the current Pope. The legacy of Pope Shenuda III derived from his famous refusal to accompany President Sadat in November of 1977 on the President’s historic visit to Jerusalem. Subsequent to this incident, the Pope issued a church edict prohibiting the Orthodox to visit the Holy Land and threatened travelers with a loss of blessings.

Whereas Pope Tawadrous II, current head of the Coptic Orthodox Church, has not reversed Pope Shenuda’s edict for the more than 80 percent of the 23 million Christians living in Egypt, Egyptian Copts of the Evangelical and Catholic denominations do not face this problem. Their leaders regard travel to Israel with approval of the normalization process between Egypt and Israel following the 1977 Camp David Peace Treaty.

As Islamist regimes of the Middle East slaughter Christians, such matters have never prompted punitive edicts from the Pope, which in fact, could save lives. Instead, Christian forgiveness is applied along with “turn the other cheek” toward those who harm you — your enemy. In terms of the 1980 Egyptian Orthodox Holy Synod decree still maintained by Orthodox leaders, Israel is the enemy occupier of Jerusalem, “the Palestinian people are still suffering from the ravages of the Israeli occupation and oppression,” and accordingly, their “Arab brothers” are innocent in this regard. If such is the vision, then logic begs the question, why not forgive the “enemy,” Israel, retract the edict and decree and allow Christians to visit in the spirit of the other cheek turned.

4 thoughts on “Holy Pascha in Jerusalem”