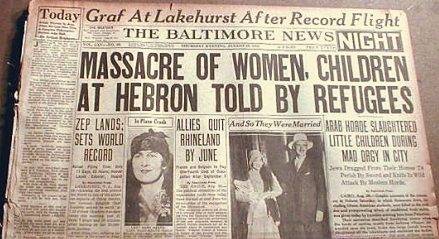 The following essay, aptly called “Serpent’s Tongue”, was written by Joshua Pundit and posted at his blog earlier this week.

First he reminds the estimable Lady Ashton, the foreign minister of the EU, of some of the history of Hebron’s suffering at the hands of the British. Then he responds to her woman-from-Mars explanation for how things are going in the country the Middle East and its co-dependents would like to see obliterated.

This could serve as a coda to Bat Ye’or’s book Eurabia: The Euro-Arab Axis

. The earlier print edition has this description, which was also used for the Kindle version:

This book is about the transformation of Europe into “Eurabia,” a cultural and political appendage of the Arab/Muslim world. Eurabia is fundamentally anti-Christian, anti-Western, anti-American, and antisemitic.The institution that has been responsible for this transformation, and that continues to propagate its ideological message, is the Euro-Arab Dialogue, developed by European and Arab politicians and intellectuals over the past thirty years. [my emphasis —D]

Of course, the Eurabia reality means that Israel must disappear, so Lady Ashton steps up to drop one more rock onto the wall Europe and Arabia are building in an attempt to create this ghetto. For sixty years the Left has been attempting to build these walls, and for sixty years Israel keeps dismantling them.

One advantage of having an established book on Kindle is that individual highlights from the text begin to accumulate and are propagated on the book’s page. This book has a goodly number of such notations, to wit, this one, which six readers highlighted:

In a larger sense what Bat Ye’or — and Joshua Pundit — are describing in the particulars could be viewed on a meta-level as scapegoating. This dynamic is deeply entrenched on the Left; employed as a deliberate strategy it is only that: strategic maneuvering. The end goal is retention of control.

Enter Stage Right, Lady Ashton, titular minister of a soviet polity, the European Union. From Stage Left, Joshua Pundit, armed with his keyboard and his faculty of discernment. She has spoken and he has read her interpretation of what happened last week. What he has perceived in Lady Ashton’s remarks is another in the endless confabulations of SerpentSpeak that leftist politicians the world over use to discuss Israel. It does indeed take a forked tongue to be able to talk as she does…

I noted with interest your remarks and your concerns about what you called “recent events in the West Bank, including in East Jerusalem, which are not conducive to the climate of trust and cooperation needed for the current peace negotiations to succeed.”

Your remarks were exclusively addressed to Israel. You were ‘concerned’ about Israel declaring something like 2.5 square miles (1 square KM) of vacant land near the Israeli community of Gush Etzion — which you, of course, call a ‘settlement’ — as Israeli state land. You’re also concerned about what you referred to as the authorization of a ‘new settlement’ in Hebron, and you “particularly deplore the recent confiscation of EU Humanitarian Assistance provided to vulnerable civilians in the Jabal Al Baba Community in the E1 area.”

First off, just between us…don’t you think your use of language is somewhat suspect? One might almost think you were biased. You refer to Gush Etzion as a ‘settlement’ when after all, it’s an established Jewish community that dates back to 1924 on land legally purchased by Jews from Arab landowners. Jews continually inhabited it and worked the land except for a 19-year period between 1948 and 1967. And when you speak about vulnerable civilians, may I remind you of how the residents were ethnically cleansed in 1948 by Jordan’s Arab Legion, and that almost 200 able bodied Jewish males were executed in cold blood after they surrendered and were guaranteed safe conduct to the Israeli lines with their women and children? May we recall who commanded the troops who committed that atrocity and who oversaw the ethnic cleansing of all the communities in Judea and Samaria as well as East Jerusalem? It was British officers, Lady Ashton, under your own Colonel John Glubb.

Then you say you particularly deplore what you refer to as “confiscation of EU Humanitarian Assistance provided to vulnerable civilians in the Jabal Al Baba community in the E1 area.” That ‘community’, as you call it, refers to a handful of Arab squatters living for a matter of a few weeks in EU-funded caravans in a contested vacant hillside within the city limits of the Israeli city of Maale Adumim, a city that Israel isn’t going to give up in any peace agreement. And as we both know, E-1 is necessary to Israeli security needs in order to connect Maale Adumim to the rest of the Jerusalem area, so it doesn’t become surrounded on all sides by those extraordinarily peaceful Arabs whom call themselves Palestinians.

So in your world, Gush Etzion is a ‘settlement’ after decades of existence on legally purchased land, while a few caravans parked illegally for a matter of weeks on Israeli land with the EU’s connivance that you give the name of ‘Jabal Al Baba’ is a ‘community’? It seems obvious that you have one set of rules for Jews and quite another for everyone else, and there’s a word for that, isn’t there Lady Ashton? And isn’t it more than just a little hypocritical to ‘especially deplore’ the Israelis confiscating what was obviously an attempt by the EU to unlawfully create facts on the ground in what at best can be considered a ‘disputed’ area? If ‘humanitarian aid’ was the purpose, why not put those caravans somewhere in Area A, where the Palestinian Authority controls things? Again, one might almost suspect you of — heaven forbid — bias.

Hebron? Ah yes, another one of those awful ‘settlements’. This one amounts to Jews being allowed to move into a property they legally purchased, one four story house. Although to be honest, it could probably be more accurately described as a ‘repurchase’. You see, Hebron had a sizable Jewish community that lived there for centuries until 1929, when the Arab residents of the town turned on their neighbors on orders of the British appointed Grand Mufti and began raping and murdering them — while the British troops who were supposed to be keeping order did absolutely nothing to stop them.

Even if Hebron were entirely given to Israel, it would not compensate for the blood of the men, women and children murdered there. And you have a problem with Jews moving into one house? Is there anywhere in the world, let alone the Middle East you don’t mind them living, Lady Ashton?

You devoted one sentence in your remarks to “the recent killing of an Israeli man in the West Bank” and called for “an immediate end to all acts of violence.” 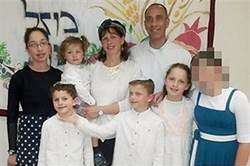 Once again, I must admit I find your use of language interesting. Let’s look at what actually happened to Baruch Mizrachi (HY”D) and his pregnant wife and children and see if we can’t find a more appropriate word than ‘killing’, shall we?

The Mizrachi family was driving from the Israeli town Modi’in to Kiryat Arba and was ambushed by a Palestinian terrorist who had situated himself by the roadside and deliberately fired on a car filled with a man, his pregnant wife and five children. The other members of the family survived by sheer chance. They were deliberately targeted, Lady Ashton, and their ‘crime’ was simply driving a car with an Israeli license plate on it. Hadassah Mizrachi, who was wounded in the attack may lose the child she was carrying as well as her life’s companion and will have to raise her children on her own.

A ‘killing’ Lady Ashton? How about using the word murder instead, since that’s exactly what it was? How about calling it terrorism? And would it interest you at all to know that the killer is still at large and that the Palestinians reportedly know his identity and location but refuse to turn him over to Israeli authorities or jail him themselves? When he’s apprehended by the Israelis, tried in an Israeli court and imprisoned, the Palestinians you’re so enamored of will pay him a salary for murdering a Jew that will be funded in part by EU taxpayers, just like hundreds of other sitting in Israeli jails for the same crime. And Mahmoud Abbas, the Palestinian leader will insist on him being freed as a ‘holy martyr’ in any peace agreement, to return to a hero’s welcome just like all the other murderers the Israelis have freed,

Does that bother you at all, Lady Ashton, to be a part of providing an incentive for all those murders? In legal terms, Lady Ashton, doesn’t that make you and the EU accessories to those murders? Have you even once forcefully condemned the Palestinian Authority’s practice of rewarding and making heroes out of those who murder innocent men, women and children? Has the EU ever once threatened to end the cash flow unless it stopped?

And to add insult to injury, in your remarks, the murder of Baruch Mizrachi barely rates a sentence, almost an afterthought. And you equivocate by calling for ‘an immediate end to all acts of violence’, as though Israelis were likewise targeting Arab families for murder on the highways. And then you call on Israel and Israel alone to mend its ways and reverse these so-called punitive actions that you deplore so much.

Joshua Pundit is an American blogger. When he asked that we mirror his post, I was glad to oblige. Obviously the official language used by the EU foreign minister is particularly disturbing, not to mention odious. There is the sense that we are falling, falling back into the Big Lie of the 20th century. What he presents here is simply one more signpost on the road to Hell.