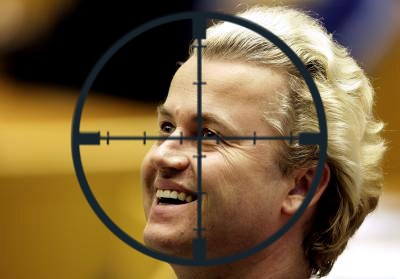 Our Dutch correspondent H. Numan has published an analysis of recent political events in the Netherlands at FrontPage Mag. Some excerpts are below:

On March 19, 2014, local elections were held in the Netherlands. On the eve of the election, party leaders celebrated their victories (or losses, as it were, for most parties). During the festivities Dutch politician Geert Wilders appeared in the Hague, one of the two cities in which Wilders’ party, the PVV (Party for Freedom), participated in this election. In a rousing speech before enthusiastic party supporters, Wilders asked the audience if they wanted a bit less local taxation and fewer Moroccans. The audience shouted, “Less! Less! Less!” This created a storm of protest from just about everyone in the country. Wilders’ remark was taken out of context and is being used to vilify him once more.

The political climate in the Netherlands surrounding Wilders now resembles the demonization of Pym Fortuyn in the months leading up to his assassination almost twelve years ago.

Last Sunday the IKON and EO TV stations broadcast a special interreligious Dutch Reformed service denouncing Wilders. The theme was based on Kennedy’s famous “Ich bin ein Berliner” speech. The Sunday service theme was a copycat variation: “We are all Moroccans.” Dutch people present literally embraced Moroccans to show their support for this poor, vilified minority. People wore T-shirts with the text “Wij zijn Marokkanen!” (“We are Moroccans!”).

The message of the fanfare was: We abhor the outright racist remarks of Geert Wilders last Wednesday. We strive towards an all-inclusive society, in which people of all races, cultures, religions and sexual preferences live together in peace. We believe that God/Allah wants it to be that way.

All political parties left, right and center denounced Wilders and demanded his apology. Wilders, nonetheless, is standing by his words.

The VVD (conservative party) Prime Minister has joined the chorus of critics, which now includes all major parties. His party was the last to join.

The PvdA (Labor) party is going even further. They announced that no parliamentary motion presented by the PVV will be supported by the PvdA. No matter what, the PvdA say they will vote against any PVV measure. Once a motion fails, the PvdA will propose it again and this time support it as their own party motion.

In contrast, another news item in which fifteen “lightly tinted” juveniles (the politically correct term for Moroccan hoodlums) entered a house, seriously mistreated the three inhabitants, ransacked the premises and got away before the police arrived on Friday does not warrant any attention anymore. If only because it would firmly underline the words of Wilders.

PVV parliamentarians on various political levels are walking out in droves. This includes two members of the PVV faction in parliament, together with most members of the newly-elected city councils in the Hague and Almere.

What Wilders said was taken out of context and was blown out of all proportions, simply to divert attention. He didn’t say anything he hadn’t said before, or what Labor politicians said a couple of years ago themselves. He probably didn’t realize that his words would be given so much attention. But since they were, Wilders has taken the opportunity to make a defiant stand on principles he has long championed.

There is a very good reason for Wilders’ opponents to gin up this controversy and distract the Dutch public.

However, this political calculation may not be as sound as it may seem. Politicians may be leaving the PVV, but the electorate is not. 85% of present PVV voters will vote the same way again. They have full confidence in Wilders. And after all, it’s not the first time such an all-out attack has been made on the PVV leader. Every time he emerges stronger from it. Also, most people don’t like it very much if politicians change their opinions quicker than the weather. Or talk in vague, opaque terms. Sir Humphrey Appleby was by far the funniest character in “Yes Minister”; in real life people don’t like politicians like him.

Wilders always looks for long-term solutions; he doesn’t go for short-term victories as all other politicians do. This is the second local election he basically ignored. The party doesn’t have enough qualified members to be able to govern effectively, so they prefer not to govern. The pragmatic maneuvering has seemed to have paid off politically. But now Wilders is finding, once again, that with a rising political star comes retribution.

12 thoughts on “Witch-Hunt Against Wilders”