Jamaat ul-Fuqra (a.k.a the Muslims of America, a.k.a. Muslims of the Americas, a.k.a. Quranic Open University) is an Islamic organization boasts dozens of rural compounds throughout the United States, Canada, and reportedly the Caribbean. It is headed by Sheikh Sayed Mubarik Ali Hasmi Shah Gilani, a Pakistani Sufi, who is persona non grata to the U.S. government and has been forbidden entry to the United States for several decades.

Most of the rank-and-file of Jamaat ul-Fuqra are African Americans, and many of them were recruited in the prison system. According to some accounts, the earliest membership of the organization was made up of defectors from the Nation of Islam who had become disenchanted with Louis Farrakhan and his reluctance to plan for an unconstrained violent jihad against the infidel society and government of the United States.

Back in the 1980s and early ’90s, members of Jamaat ul-Fuqra committed a series of fire-bombings, murders, and other crimes, many of them targeting Hindus. Sheikh Gilani reportedly reined them in later in the 1990s, and most of their crimes since have been confined to non-violent offenses such as money-laundering, welfare fraud, product counterfeiting, and unauthorized trafficking in firearms.

For a few years the State Department listed Muslims of America as a terrorist organization, but that designation was mysteriously withdrawn in the year 2000.

Jamaat ul-Fuqra became prominent in the news for a number of weeks in late 2002 and early 2003 when it was revealed that intelligence officials believed that the “Beltway Sniper” John Alan Muhammad had holed up in the MOA compound in Red House, Virginia, during a break from his murder spree in the fall of 2002. After that brief flurry of interest, the JuF story died out until it was picked up in this space, in the earliest days of Gates of Vienna.

When I read those news stories in The Washington Times late in 2002, I was brought up short by the name “Red House”, which I knew to be a tiny hamlet in the middle of rural Charlotte County. I was familiar with the place, having passed through it numerous times on my way to various places. How could Red House be the home of a Muslim terror-training compound?

So I took my camera and paid a visit to Red House one Saturday afternoon in October 2005, intending to write up my findings here at Gates of Vienna.

The rest, as they say, is history. My report went viral, and the story spread rapidly through the blogosphere. Other dedicated individuals and groups took up the research and investigation, notably CP and the Christian Action Network.

A few months later I retired from first-hand investigation of Jamaat ul-Fuqra, at Dymphna’s behest. She was concerned that our proximity to the compounds in Red House and Meherrin might put us in personal danger. Fortunately, there were plenty of capable people looking into the doings of the Muslims of America by then, and media interest in the group has increased even further in the intervening years. The most recent revelations, concerning an MOA enclave in Texas, were broken by Ryan Mauro for the Clarion Project. 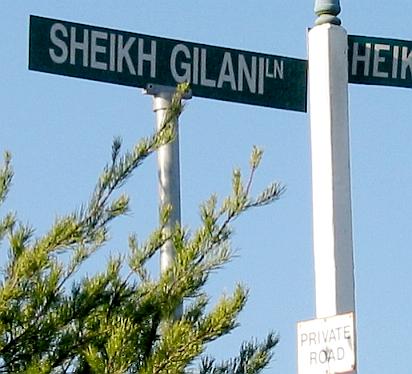 For the past eight years Marty Mawyer of the Christian Action Network has been one of the most stalwart and courageous investigators of Sheikh Gilani and the Muslims of America. Marty has visited and overflown several compounds, and even discovered at least one compound that was previously unknown to the FBI.

Marty’s work has not gone unnoticed by Sheikh Gilani and his American lawyers: the Muslims of America have now filed a $30 million lawsuit against Marty and the Christian Action Network. As we all know, the primary goal of “lawfare” is not to win one’s case, but to bankrupt one’s adversary. The legal jihad by MOA is designed to drain CAN of its funds and force it to give up any further investigation of Jamaat ul-Fuqra.

Marty Mawyer has launched a legal defense fund to help defer some of the expenses of fighting the lawsuit. Below is his video appeal:

I have just launched a campaign to help us defend ourselves against a Muslim terrorist organization that is suing us for $30 million.

Please go to this web site if you can help us at all to defend ourselves in this massive federal lawsuit.

I have some bombshell news to report:

… the FBI has just declassified a report that confirms EVERYTHING I have been saying.

This is important validation for our work, and for my book, “Twilight in America” — which exposes the activities of this Islamic organization.

But now that “the jig is up” for this group — which is known as Muslims of America (MOA) — how do we get them shut down for good?

FIRST, Christian Action Network is supporting Congressman Louis Gohmert of Texas in his efforts to get Congress and our national leaders to take this threat seriously.

Rep. Gohmert is deeply concerned about this MOA group
because he is a true patriot who cares about America’s safety …

… and because MOA operates one of its enclaves in his state of Texas.

In fact, a member of this terrorist group shot another member in Texas in a brutal slaying a few years ago.

SECOND, Christian Action Network must be able to continue our work to expose MOA and get them shut down.

MOA is a front group for a notorious jihadist network that operates out of Pakistan known as Jamaat Al Fuqra. This is the same group linked to the beheading of Wall Street Journal reporter Daniel Pearl and “Shoe Bomber” Richard Reid.

They have committed at least 10 known murders in the U.S., plus fire-bombings, terrorist attacks and plots. They were even involved in the first World Trade Center bombing!

What’s more, the FBI has revealed that they were involved in a coup attempt to overthrow the Caribbean nations of Trinidad and Tobago!!

Our biggest obstacle to shutting down this group and continuing our work with Congress is a massive multi-million-dollar federal lawsuit brought against me, my co-author and our tiny organization by leaders of this TERRORIST ORGANIZATION!

That’s right. My book, “Twilight in America,” exposes MOA’s illegal terrorist activities in America … and proves what the FBI has just confirmed in their declassified document:

Their lawsuit demands a federal court stop publication of my book, place a gag order on me, my organization and my co-author …

… and they are asking for $30 million in compensation for “causing them harm” by publishing the truth about their group.

As you can imagine, the onslaught from this MOA group is horrific. The lies and distortions coming from them are shattering to our tiny organization.

Christian Action Network is a national organization with a major impact on U.S. policy going back more than two decades. But we do our work on a shoestring budget — and we are funded solely through gifts from friends and supporters of our causes and issues.

This lawsuit will shut us down in just a few months if we don’t have some financial help.

Our legal expenses alone have already totaled more than $180,000 and are totaling about $15,000 per month — that’s on top of our monthly operating expenses, overhead, salaries for our small staff, and supplies.

We urgently need supporters to help us pay our legal bills so we can fight these Islamic jihadists where it counts the most right now: in the American courtroom.

We have launched a national campaign to raise $30,000 to offset our legal fees. For a gift as small as just $4 you can download a resource that explains the history of this MOA group in detail.

And for a gift of just $25, I will send you the book that started it all — “Twilight in America.” This Amazon best-seller has sparked a major national debate that has exposed these radicals for what they are!

Any donation through our campaign web site will go toward keeping Christian Action Network in operation, continuing the publication of our book, and — most important — our exorbitant legal expenses to fight this suit.

Could there be more important issues than preserving our First Amendment right to speak the truth without being sued … having our book banned … or having to pay $30 million to Islamic radicals who hate America?

God only knows how they will use $30 million of money from CHRISTIANS to further their jihadist goals!!

You can help prevent this from happening by sending any amount to help through this web site.

Do you agree that we have the right to expose radical terrorist training in America?

Do you agree we have the right to publish this group’s documented criminal history of murders, assassinations, drug crimes, welfare fraud, weapons crimes, and more?

Please help with a gift. We are a verified non-profit organization, and your gift is tax-deductible to the fullest extent the law allows.

Thank you for your help, and may God bless you.

Readers who don’t want to contribute directly may choose instead to buy his book, Twilight in America

, or CAN’s videos about Jamaat ul-Fuqra.

Jamaat ul-Fuqra (“Community of the Impoverished”, also known as “Muslims of America”) was founded by a known terrorist, the Pakistani Sheikh Sayed Mubarak Ali Hasmi Shah Gilani. Over the past thirty years it has established a network of dozens of rural training compounds across the United States and Canada. It recruits new members primarily through proselytizing in the prison system.
For more information on JuF, see the Jamaat ul-Fuqra Archives.