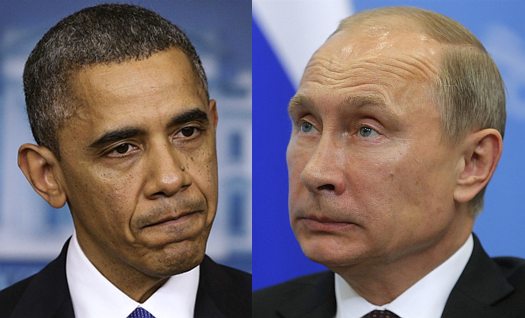 The widespread knee-jerk reaction to recent events in Ukraine has been dismaying, to say the least.

It’s no surprise to see liberals and progressives parroting the Obama/Kerry party line on the Great Satan Russia, but the me-too response of many conservatives is another matter. Don’t they realize they are being led around by the nose with this “Putin is evil” meme the media have ginned up?

I’m not saying that we have to embrace Vladimir Putin like a big warm fuzzy Russian teddy bear. Mr. Putin is the ruler of Russia, after all. He rules in the time-hallowed Russian tradition. He is shrewd, ruthless, and autocratic. He is also very intelligent — more intelligent than any of the prep-school boys the West puts up against him — and is adept at playing a long-range game of geopolitical chess against opponents who can’t even manage to put up a checkerboard.

Just because some of us choose to see what is happening in Ukraine with a clear-eyed realism doesn’t mean that we have to think Mr. Putin is a wonderful, shining example of political heroism, flowing with the milk of human kindness. We can understand the current train of events and follow each move in the game without having to root for the Kremlin.

There seems to be a widespread tendency (especially in the USA) to be unable to reassess a grotesquely negative political view of someone without turning that person into a glorious saint. As if there were no other choice than a Manichaean Good/Evil pair.

Reality doesn’t generally fit into that schema. Understanding what Vladimir Putin is doing doesn’t require converting a media Beelzebub into a media St. Francis. It does, however, demand that we spit out the simple-minded gruel peddled by the MSM and the well-coiffed spokesbeings for the Washington-Brussels Axis of Putty.

Take, for example, the “seizure” of the Crimea by Russia. As I attempted to convey in a light-hearted way the other day, the Crimea has been fully Russian for well over two hundred years. If Nikita Khrushchev had realized in 1954 that Russia and Ukraine would come to a parting of the ways in less than four decades, he would never have assigned the Crimean oblast to the fictional oversight of Ukraine.

The treaty that followed the breakup of the Soviet Union was a formal acknowledgement that the Crimea was Russian, populated by Russians, garrisoned by the Russian military, and served the vital strategic interests of Russia. The document provided a polite fiction designed to keep the region under Russian control without having to redraw Khrushchev’s borders of Ukraine. To wave that piece of paper as “proof” that the Crimea is Ukrainian is either an example of stunning historical illiteracy or a deliberate act of cynical dishonesty.

The confrontation in Kiev was an obvious set-up, financed and orchestrated by Soros and the EU with the connivance of the Obama administration. We knew that even before we found out who hired the snipers to kill the protesters and police. Obviously, the major political factions in Ukraine studied their techniques under the tutelage of the KGB, and learned their lessons well.

The EU and the USA are attempting to leverage the conversion of Ukraine from a vassal state of Russia to a vassal state of the EU, and thus of the New World Order. Such vassalage is more comfortable and prosperous in the EU than under Russian suzerainty, but it is still vassalage. The fortunate citizens of the New Multicultural Ukraine will be allowed to have Xboxes, “Ukraine’s Got Talent”, gay pride parades, government-issued condoms, and total control by Brussels over the chemical makeup of their vodka and borscht. Plus they get to be enslaved to the banksters of the IMF and the ECB. Big improvement.

It’s clear that Vladimir Putin understood from the very beginning what was happening in Ukraine. Half the local leaders on both sides of the confrontation are probably FSB agents. He’s smarter than any of his counterparts in the West, and is playing them like a fiddle, despite having been dealt a bad hand.

His main goal was probably to annex the Crimea (or at least establish unshakeable control over it) and firm up Russian control of the pipelines. Let the rest of Ukraine enjoy being ruled by the ECB!

But the West has set Mr. Putin up as the big bogeyman. It’s amazing to see conservatives — people who should know better — swallow the Obama administration’s disinformation hook, line, and sinker. This perennially shallow view of the events and history of the region is appalling.

Poor, innocent, downtrodden Ukraine! Aggressive Russian imperialist invaders in the Crimea! Ukrainians long for democracy, but are kept down by the Russian boot!

What a load of codswollop.

I predict: sometime in the next couple of weeks, we will watch a replay of Syria, but with Ukraine as the pawn this time. Mr. Putin will hand Mr. Kerry an offer he can’t refuse, and it will get prominent play in the New York Times and on CNN. A third-party mediator will propose some face-saving measure that will allow Washington and Brussels to proclaim “we have achieved true democracy in Ukraine” while Russia gets everything it wanted in the first place. Then, for the next twenty or thirty years, ordinary Ukrainians will enjoy the “austerity” regime imposed on them à la Greece as the price for being handed all those billions and billions of dollars and euros.

Understanding what Russia is up to is not rocket science, but it does require removing the Cold War blinders to take in a wider view.

Despite his career as a loyal KGB officer, Vladimir Putin is not a Communist ideologue, and the Soviet Empire is no more. Mr. Putin is not trying to spread a totalitarian ideology by force over the entire globe. His goals are to consolidate his own power and secure the state interests of Russia.

And, yes, this means that he will engage in ugly and violent behavior in the “Near Abroad” in order to assert Russian control (or at least neutralize any threat to Russian dominance) on its borders. He will be — as Russian despots have been since time immemorial — underhanded, deceitful, duplicitous, and willing to do business with anyone in order to secure his goals.

But those goals include the protection and advancement of the Russian people, which is why Mr. Putin remains so popular in his country, despite his autocratic ways.

Can you think of any Western leader who unequivocally promotes the protection and advancement of his own nation and people?

Neither can I. That’s why I don’t rah-rah over the idea of a Potemkin democracy in Ukraine.

Becoming a full-fledged dues-paying feoff of the hegemonic European superstate is not an outcome that any of us should celebrate.

63 thoughts on “The Devils You Know”