The following news story from South Dakota — which has a Mohammed Coefficient of 100% — will be depressingly familiar to regular Gates of Vienna readers and anyone else who’s been following the “grooming and pimping trials” in Rochdale, Bradford, Oxford, and elsewhere in the UK.

The pattern is almost identical: vulnerable young girls — in this case, as young as 14 — are lured with drugs and gifts into a life of sexual slavery. This particular form of vile criminal behavior is very, very rare except among Muslim males who live in non-Muslim cultures. Yet there the mainstream media have lowered a cone of silence over the JIM aspects of these sex-slavery gangs.

The good news is that this despicable creature will spend the rest of his life behind bars.

Below are excerpts from the report in The Argus Leader. Some of the more lurid and disturbing details have been redacted:

An Iraqi refugee who sold several women and girls for sex at his Sioux Falls apartment will spend the rest of his life in prison after U.S. District Court Judge Karen Schreier agreed with victims who called him a “monster.” 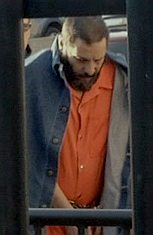 A jury convicted Mohammed Alaboudi in December on four counts of sex trafficking. His lawyer asked for the same 30-year sentence given last April to a co-conspirator, Emannuel Nyoun. But the judge noted that Nyoun had victimized just one young woman, while Alaboudi had hurt many, many more.

“I don’t think the two of you are comparable,” Schreier said. “You have been described by the victims as someone who is a monster. I do not think that is an unjustified characterization, based on how you treated the young women who came through your home.”

Four victims, identified only by their initials, recounted during Monday’s hearing the physical and sexual abuse against them at the hands of the 45-year-old Alaboudi. Earlier at trial, many of them had testified how he had given them drugs and shelter to lure them into dependency and prostitution, using his one-bedroom apartment in central Sioux Falls as headquarters for what U.S. Attorney Brendan Johnson has called “a house of horrors.”

Assistant U.S. Attorney Kevin Koliner noted Alaboudi’s status as a refugee who was welcomed into the country and community, only to take advantage of that hospitality.

Alaboudi preyed on the vulnerability of his victims, many of them homeless with drug addictions and, in some case, mental health issues, Koliner said. The women, two of them underage, were kept high on drugs and alcohol while forced to engage in sex acts with strangers.

“The defendant, who purposely drugged the girls and raped them repeatedly, then allowed his cohorts to come in” and do the exact same thing, Koliner said.

Kooistra argued that his client had substantial health problems, including diabetes, and that he would be in his early 70s upon release, if granted a 30-year sentence and lived that long.

But in handing down the sentence — four concurrent life terms — Schreier said Alaboudi’s health issues didn’t deter him from committing his crimes.

“A lot of the victims said you treated them more like dogs,” the judge said. “I know that most people treat their dogs better than you treated these women.”

Notice that the defendant required an Arabic translator. How did he communicate with his victims when he plied them with drugs and lured them to his apartment? Hand signals?

When asked through his Arabic translator whether he understood that he could appeal his sentence, Alaboudi launched into a tirade, blaming the FBI for bringing him to this moment.

14 thoughts on “From Rochdale to Sioux Falls”