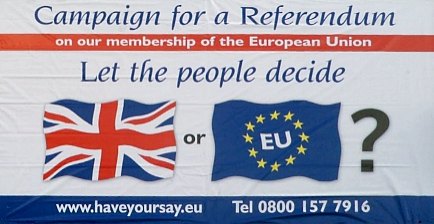 The elections for the European Parliament are coming up in a few short weeks, and the United Kingdom Independence Party (UKIP) is currently surging in the opinion polls. Our British correspondent JP sends a couple of samples of commentary on UKIP and the EU, and includes this note:

Here’s evidence of the UKIP surge in action — see the following best-placed comment for depth of passion, particularly the closing paragraph.

From the comments on Charles Moore: “I’ve been a Eurosceptic for 30 years but my vote will be up for grabs” in The Daily Telegraph, Commentator Dogzzz on 28 March 2014:

So you asking if you want to give away what is left of our sovereignty, our independence, our Birthright to be a confident, self ruling nation, trading confidently and prosperously with the 4.5 billion consumers outside the EU as well as much more competitively with the 0.5 billion in the EU in order to hide, supine and cowardly in the most anti-democratic institution, having unelected foreigners change our laws to benefit other nations, and plunder our wealth to pay for it?

Or do we want to be the confident, friendly, prosperous independent self-governing global traders and friends to all, choosing and implementing our own laws, for the good of our own people, democratic, free and self reliant?

I cannot abide giving away our birthright to a profoundly anti-democratic entity which has just refused to recognise 3 popular referendums in the last three weeks alone. An entity which can now over-rule OUR elected representatives in OUR national Parliament and does so without regard for the needs, or concerns of the British people, at all.

I am unashamedly, proudly and patriotically going to fight FOR our nation, FOR our people and FOR our birthright. A birthright our forefathers fought in two world wars to defend. Democracy, prosperity, the English rule of law, common sense human rights, from the English bill of rights onwards, which we exported all over the world, for the Commonwealth and our historical global trading links with the whole world.

I support UKIP and I support OUR independence from anti-democratic oligarchy.

The people feel ignored — and they are angry

Not one leader of a major party has a true connection with ordinary folk. This is dangerous

There will really be only two contestants in the next general election: the political class and the people. And by the “political class”, I mean the entire operation that runs, manipulates and communicates the activities of government. That conglomeration of politicians and their special interest lobbies, media followers and professional handlers is now more self-referring, inbred and profoundly detached from the reality of most people’s lives than at any time in a generation.

This fact was brought home very sharply by the grotesquely embarrassing fault line that appeared in the brief lapse of time between the ending of the Farage-Clegg debate — during which a vast army of esteemed press commentators declared Nick Clegg the winner — and the release of the YouGov poll, showing that a large majority of the ordinary public believed Nigel Farage had won. Most alarmingly, there was a remarkable media consensus: it was not just wishful-thinking Europhiles who thought Clegg had walked it.

In the mortifying aftermath, which saw pundits scrambling to amend — or explain away — the bizarre discrepancy between their initial judgment and that of the wider world, an awful truth began to emerge. It was, indeed, as if the Westminster media and actual voters in the country had been listening to an entirely different event — as, for all intents and purposes, they were. And strangely enough, the preconceptions of the two camps were almost exactly the opposite of what might be expected.

It was the pundits, not the public, who were obsessed with personality quirks and presentational cool, where the public were much more attracted to convictions and basic values. The press commentary focused on Farage’s sweaty anger and contrasted it with Clegg’s calm smoothness: political success had to be all about clever presentation and professional delivery. But real people clearly saw Farage’s anger as genuine and appropriate, and reacted against Clegg’s glib patter, which they presumably perceived as untrustworthy.

So maybe all those post-Blair assumptions about politicians needing to be sold like products with the slickest possible advertising techniques need to be re-examined. When the electorate feels that its own concerns are being ignored or marginalised, it will embrace a spokesman who looks as if he genuinely shares their strong beliefs, even if he is amateurish or unpolished in his delivery. It is the Westminster club that is addicted to image-led politics, not the country.

This disconnection between the governing class and the public may be the key to understanding another rather startling development. The pensions revolution that George Osborne announced in the Budget was — goodness knows — a splendid move. But by all the logic of electoral prediction, it should have had a great impact on only one tranche of the population: a significant minority, but one that would most likely be Conservative-voting already.

In fact, the effect that it had on the opinion polls was far greater and more demographically widespread than should have been expected. I suggest this was because that reform seemed to be addressed to the actual needs and anxieties of ordinary people. It was one of those vanishingly rare moments when the political club made real contact with the world most voters inhabit — and it was electrifying. For once, the Chancellor did not seem to be obsessed with Westminster gamesmanship, with scoring points off the Opposition front bench, or showing off his ostentatiously clever Whitehall machinations. He announced something that would have an immediate and dramatic impact on people’s lives — and the people rewarded him.

That brings us back to the Farage win, and what to make of it: the alienation of the public from professional politicians is central to this. What the voters know — and has clearly been underestimated by the Westminster fraternity as a factor in the Ukip phenomenon — is that the EU is the ultimate politicians’ club. It has actually institutionalised contempt for public opinion by making the democratic will irrelevant. And it is that view that Mr Farage represents so well. He may look and sound like the guy down the pub who never stops ranting, but that is, for the moment, more in tune with the public mood than all those identical, smart-talking little boys doing their debating society tricks.

I can’t recall any time in the last half century of British politics when not a single leader of a major party had what seemed like a true connection with ordinary people. Harold Wilson, Jim Callaghan, Margaret Thatcher, Neil Kinnock, even Tony Blair in his Islington middle-class way: there has always been at least one official party voice that reached into real life. (When Ed Miliband accuses David Cameron of being out of touch, it rings laughably hollow. Mr Miliband is the son of a Marxist academic whose upbringing and intellectual preoccupations would be incomprehensible to most voters.)

This situation is not just politically peculiar: it is positively dangerous. When the population feels that it is not being listened to, it will find ways of expressing its rage and frustration that must be heard. Right now, it has good reason to believe that its concerns are regarded with contempt by the elected conspiracy that seems to confuse “popular” with “populist”: any opinion that is too enthusiastically endorsed by the masses must be so vulgar and crass that it is unworthy of recognition.

This is quite strange, when you think of it. After all, one of the chief tenets of the current political consensus is that elitism is a social evil. The EU, of course, has convenient mechanisms for entirely disregarding the democratic will. Any frustrations that the populations of member states may have with its arrangements must be settled in the streets, which helps to account for the rise of neo-fascist movements in France, Greece and Italy. If there is no democratic outlet for popular opinion, it will be forced to find a non-democratic one.

There is a wonderfully gnomic aphorism from the Greek poet Archilochus, made famous by Isaiah Berlin, which goes: “The fox knows many things but the hedgehog knows one big thing.” Polished professional politicians like Mr Clegg and Mr Osborne know many things. But the one big thing that Mr Farage knows may trump them all: the people feel that they are being ignored and they are angry about it. Anyone who speaks for them is permitted to get visibly annoyed on their behalf. Mercifully, all those poll respondents who believed Mr Farage had won the argument have a legitimate, non-violent outlet for their frustration. They can vote for him and teach the other parties a lesson.

23 thoughts on “Fighting for Independence from an Anti-Democratic Oligarchy”