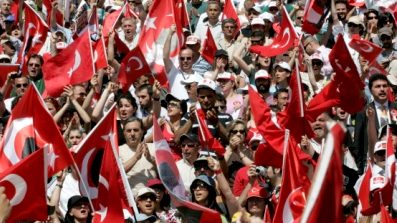 The following Austrian article analyzes the competition between Fethullah Gülen and Prime Minister Recep Tayyip Erdogan to be the leader of a renewed Islamic Turkey. JLH, who translated the piece, includes this note:

Although this is a couple of months old, I have seen no other references to it and it does lift the curtain a little on what is going on in Turkey. At first blush, Gülen’s own declarations are reassuring. But then, what else could he say, living among us? Cf. CAIR.

At least it’s nice to know who is who when our enemies are fighting among themselves.

The translated article from Kurier:

The Secret Society Around Preacher Gülen

Premier Erdogan is Proceeding Seriously Against the Network of Fethullah Gülen

A Look Behind the Scenes at this Secret Organization

Both men have a vision and a mission: Establishing a deeply Islamic society in Turkey (and other states as well). This bond united Fethullah Gülen* — who has built up a very clandestine and very influential worldwide network, and Turkish Premier Recep Tayyip Erdogan.

But a bitter battle over power in Turkey has flared up between these two alpha males. The Gülen movement, which has established positions in Turkey, especially in the areas of jurisprudence and police, is said to be behind the uncovering of a corruption scandal in which allegedly involving ministers who have since been discharged. The talk is of bribery in amounts of more than 60 million dollars.

But who is behind the ominous coalition now challenging the Turkish head of state? The KURIER questioned Haken Yavuz** about that, during his stay in Vienna. The political scientist teaches at the University of Utah in Salt Lake City and has published the standard reference work on the Gülen movement.

“This is a strictly hierarchical, tightly controlled organization with Fethullah Gülen at the head, surrounded by 20 to 30 top people. Then, worldwide, 3,000 to 5,000 regional directors. Altogether, there are one to two million activists and a number of sympathizers,” says Yavuz.

The goal is to establish “Islam as normative in everyday life,” i.e., to Islamize society in all aspects, albeit without sharia. To do this, Gülen is relying on education. (The organization runs more than 100 schools worldwide.) “The intention is to raise an Islamic elite, who will fill responsible positions and become influential,” the expert explains.

In Turkey, the “Gülen disciples” are said to have infiltrated to the top in all important sectors. From education and medicine, to the banks, energy and construction, to tourism and the media. And to fill the war chest, all managers are expected to divert 10% to 20% of their earnings to the movement, which the professor — because of how sealed off it is — compares to the secret Catholic organization the Opus Dei.

At first, the relationship between Gülen and Erdogan and his AK Party, which came to power in 2002, was a symbiotic one. “Erdogan needed the personnel resources of Gülen’s people to occupy strategic positions, and Gülen needed the AK Party to be able to place his people in high positions.” The unifying goal: to break the dominance of the military and the secular bureaucrats.

That succeeded. “The common enemy,” as Yavuz puts it, “has been destroyed” — and with it, the previous bond. But why did the Gülen movement, which is rumored to have a close connection to the US government, see this as the moment to go on the offensive? Some observers believe that, because of Ankara’s Iran and Egypt policies (subversion of the sanctions and support for the now banned Muslim Brotherhood), Washington is so angry that it has dropped Erdogan. That motivated Gülen to risk a direct confrontation with the Turkish premier.

But Erdogan is using all means at his disposal to fight back. He replaced 5,000 suspected Gülen adherents in the apparatus of the judiciary and police, which had driven the corruption affair. Ultimately, high officers in the supervision of banking and telecommunications as well as television got the axe — a “tidal wave of purging” intended to give Erdogan the upper hand again.

Hakan Yavuk: “I believe the Gülen movement has overreached and will end up with the short straw. First of all, everyone in Turkey know that there is corruption. No big deal. Second, Erdogan is a charismatic leader. Fifty per cent of the population are still behind him. Third, the opposition is very weak. And fourth, despite setbacks, the economy is still in good shape. And that matters. At any rate, the nationwide local elections at the end of March will be a test of the mood.”

Erdogan wants to convince Merkel of his conspiracy theory.

It is clear to Premier Erdogan. The present internal political crisis, after the exposure of a corruption scandal that is said to have reached into the highest levels of the government, can be traced to an (international) plot. Certain circles — especially in the USA — would like to impede Turkey’s ascent. Erdogan intends to convince Chancellor Angela Merkel of that during his visit to Berlin on Tuesday.

But not even all his parliamentary AK representatives agree wit this assessment. Again on Friday, an AK representative turned away from him. Many also criticize the government’s approach. Instead of clearing up the corruption affair, it is being hushed up by the forcible relocation of critical officials in the justice and police organizations.

Walter Friedl is the lead correspondent of the KURIER for international and foreign policy affairs. His special areas of responsibility are Turkey, the Near and Middle East, as well as Africa.

4 thoughts on “Competing to Re-Islamize Turkey”