Michael Rockefeller was born in 1938 and disappeared in November 1961 during an expedition in what was then still Dutch-ruled New Guinea. He came from the very rich and powerful Rockefeller family. His great-grandfather — John D. Rockefeller of Standard Oil fame — was not just the richest man in the USA. He is often ranked as one of the wealthiest human beings who has ever lived. 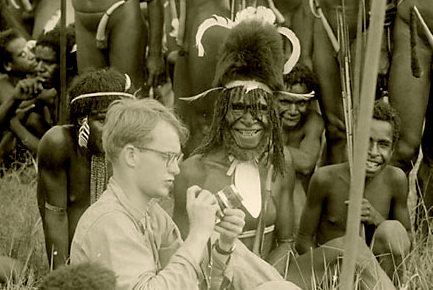 There were rumors that this had been the case already in the 1960s. Hoffman had these stories confirmed by the locals while staying with the same tribe in New Guinea multiple times. The killing was partly in revenge for a standoff where Dutch colonial officials had killed several tribe members three years earlier. The tribe therefore wanted to kill a white man, any white man, in retaliation for the deaths.

In doing so, they followed an extremely ancient cultural pattern of revenge killings and ritual cannibalism. Tribe members in 1961 plunged a 10-foot spear into Michael Rockefeller’s chest while he was still swimming. Afterwards, they cooked his limbs over an open fire and ate them. He was probably dismembered in what Hoffman calls an act of “sacred violence.” Eating the brain was the high point and delicacy for the New Guinea cannibals.

Carl Hoffman describes how a hole was made in the skull and that only the senior men ate it: “They shook the brains out onto the leaf of a palm, scraped inside the skull with a knife to get every last bite, then mixed the mass with sago, wrapped the leaf up, and roasted it on the fire. This food was special.” When it was all over, they wrapped what remained of the skull in banana leaves, packed it in one of the canoes and paddled home.

Professor Jared Diamond in 1997 published the work Guns, Germs, and Steel: The Fates of Human Societies. It became an international bestseller, was translated into many languages and earned him a Pulitzer Prize. He writes specifically in order to dispel alleged historical Eurocentrism.

In his book, Jared Diamond claims explicitly (page 14) that “New Guineans are on the average at least as smart as Europeans.” Diamond suggests that IQ tests measure cultural learning only, not innate intelligence, and that New Guineans are probably more intelligent than the average European or American. He repeats this claim several times. For instance, he suggests (page 21) that “…in mental ability New Guineans are probably genetically superior to Westerners,” partly because they do not have television.

They did have cannibalism for a very long time, though.

It’s a good thing that Europeans got so much help from the sophisticated cannibals of New Guinea. Without them, we would have no Sistine Chapel, no Moonlight Sonata, no Romeo and Juliet, no splitting of the atom and certainly no space travel. We would just have a bunch of racist, homophobic and misogynist white men, raping the Earth and creating global warming.

I touched upon this subject in my 2008 essay On Human Sacrifice and Political Correctness. When I was younger, I was once told that regularly practiced and culturally accepted cannibalism (as opposed to exceptional cannibalism under famines or extreme conditions) didn’t exist in any society in modern times. This was a racist, colonialist lie invented by prejudiced Europeans. One example of this confabulation would be the former cannibal dubbed “Friday,” who converted to Christianity in Daniel Defoe’s 1719 novel Robinson Crusoe. As I grow older and investigate things for myself, I see how wrong this claim was.

Professor Diamond states (page 199) that “…the virus causing laughing sickness (kuru) in the New Guinea highlands used to pass to a person from another person who was eaten. It was transmitted by cannibalism, when highland babies made the fatal mistake of licking their fingers after playing with raw brains that their mothers had just cut out of dead kuru victims awaiting cooking.”

The interesting thing about this quote is that Mr. Diamond has just stated that some New Guineans widely practiced cannibalism, all the way up to the mid-twentieth century at least. He says this matter-of-factly, but he does not clearly indicate that he disapproves of this. In fact, from his writings, he appears to be more critical of television than he is of cannibalism.

In Guns, Germs, and Steel, Jared Diamond claims that certain tribes of New Guineans are smarter than Europeans, even as he admits that the same tribes have been cannibals until nearly the present day. This raises the following question: Are these clever cannibals of New Guinea smarter than Europeans in spite of being cannibals, or because of it? Does eating human brains makes you smarter? Has anybody done serious studies of this matter? Such studies would be an interesting intersection between Harvard University and zombie movies.

Perhaps the esteemed Professor Jared Diamond will clarify matters in future books. Some of his many readers may want to know more about this subject.